Patrick: One of the most beautiful things about IDW’s Teenage Mutant Ninja Turtles series is the relationship it has with the franchise’s past. And that’s an insane past. TMNT have been rebooted and re-imagined so many times in their 30-year history, there’s really no such thing as a definitive take on the characters. You’ll never be able to get two TMNT fans to agree on what constitutes canon for them – there are just too many movies, video games, comics, television shows and elaborately staged action-figure set-pieces played out on my bedroom floor. More than Superman, more than Wolverine, who these characters are at their core is left to the individual reader. The second issue of CityFall takes that concept of subjective history and makes it arrestingly explicit as Leonardo is forced to recontextualize the adventures we’ve been reading for the last two years.

This issue is mostly fallout (Cityfallout?) from the two big losses the turtles suffered in the previous issue: Casey Jones has been stabbed and Leonardo has been kidnapped. April and Angel rush Casey to the hospital, where he receives the attention that he needs but he remains in critical condition. Splinter and the Turtles, return home to find an olive branch from Old Hob. Turns out Hob (with Slash at his side) wants to unite the mutants against the human that are causing so much trouble in the streets of New York. To prove himself to the Turtles, Hob offers Leo’s location. The reluctantly agree to his terms… sort of.

Back at the Foot Clan hideout, things get interesting. Kitsune leads Leonardo through his consciousness and toward health. It’s an abstract journey, and one that takes pit-stops in each of the biggest, scariest moments from Leonardo’s life. The twist is that each moment shows Leonardo’s family as derelict in their care and affection for their eldest brother. Specifically, Splinter repeatedly fail to protect, train and nourish Leonardo. It’s a bravura sequence that allows the original artists re-imagines five different stories as surreal two-page spreads. Each artist lets the principles that guided their initial runs on the series guide their drawings here, so no two sequences look-alike. A while ago Drew and I talked about doing a Cram Session for Cityfall, and I was looking forward to the emotional experience of exploring all those great stories again. That’s exactly what this achieves – with the added bonus of taking a tour of the artists loaned their talents to this series. It’s an explicit way of acknowledging that the that events shaped the character in-narrative are as meaningful and varied as the artists that shaped the characters outside of the narrative.

The first sequence, is pretty base, and starts at the archetypal TMNT beginning: turtles, ooze, rat. Dan Duncan, who drew TMNT during the entire first year, takes his spread through the faltering sense of security provide by Splinter’s home in the sewers, as the Turtle stronghold is penetrated first by mousers and then by Shredder himself. The message being that the comfort Splinter provides is false.

The second sequence comes from the TMNT: Microseries 4: Leonardo. In the Micro, Leonardo is out looking for a kidnapped Splinter (an interesting inversion of what’s happening currently in the series), but he’s overwhelmed by Foot Ninjas. The fantasy shows Splinter dangling Leonardo over the building’s edge, taunting him for feeling as though he was prepared to take on what is so clearly an insurmountable enemy force, and then being rescued by a rando Foot Soldier. As it actually happened, Leo was taunted by the rando Foot Soldier, and we was forced to slink off into the darkness by himself. Sophie Campbell draws the characters so round and cute – his unmasked Leonardo has an unmistakably naked and vulnerable quality to it.

The third nightmare gives us the transcendently moody art of Andy Kuhn as it reinterprets the Slash episode. Splinter’s hardline morality is projected right into the middle of the fight, and even though Leonardo’s hand is forced, he’s made to feel guilty for killing Slash. Shredder appears and tells Leonardo that he did what he had to do in order to protect his clan and that is the moral high-ground. Kuhn also frames the action with the two turtles’ faces and the difference couldn’t be greater: one is an honorable warrior and the other is a monster.

The fourth vision ends up being kind of a thematic retread of all of the previous, but extended to Leonardo’s brothers. Ben Bates takes us back to the battle on Neutrino, a fight which found all four Turtles way out of their element. They were ninjas on a battlefield populated but robot-tanks and laser canons. Not only is Leonardo ill-equipped to deal with this threat, his brothers are as well. So all of Splinter’s failings to Leo are visited upon the other Turtles, putting the thing he values most in danger.

And finally, Kevin Eastman reprises Splinters’ convoluted lesson from issue 21. It’s unsettling how little distortion the story needs to make Splinter seems like an asshole. This is the episode where he takes on a disguise and beats and taunts the Turtles as a method of toughening them up. Predictably, Shredder appears in the end to set Leonardo free.

It’s incredible to see all of these moments perverted to Shredder’s ends. I posted my two favorites, and I only stop there because I respect copyright laws. It’s a wonderful celebration of the last two years of character development, while sickeningly undermining the series’ core themes. It’s awesome and breathtaking, and I want to hang all of those spreads on my wall.

Taylor, there were also things that happened in this issue (if you can believe it) and some stellar art by Mateus Santolouco, but damned if I can find the space to mention it. Did you love this distorted trip down memory lane as much as I did? Did it take you a second to remember where you recognized Sophie Campbell’s art from too?

Taylor: The nightmarish revival of traumatizing moments was simply breathtaking, there is no doubt about that. I enjoyed it every step of the way and in many regards I think it is also a savvy move by the creative team behind TMNT. Not only does it reminds the reader of where we have been on this journey with the turtles but it potentially catches new readers up to speed on what this new TMNT is all about. Further, it takes what to this point has been a fairly disparate set of adventures and unifies them into a cohesive whole. While all of these adventures have meditated on the same themes of family bonds and loyalty they never felt like they were connected in any way other than thematically. Old Hob seemed about as far removed from Planet Neutrino as Krang does from Casey Jones. Now, however, everything is coalescing into a grand ninja opera that promises to be unforgettable. Regardless if this has been the plan for two years or not, the result is simply stunning and reminds us how comics can be more than just a series of serialized adventures.

I could continue to retread some of the ground you covered, Patrick, but you’re right, there is so much more also going on in this issue. You mention the art of Santolouco living up to what has now become his expected greatness. I’m tempted to gush once again about how much I enjoy his art but there’s no need to do that when we’ve already done that on multiple occasions. Rather, I want to focus a bit on how well he is collaborating with Kevin Eastman and Tom Waltz in their writer-artist relationship.

From the very beginning of this issue it’s clear that the they have worked together to work out how the panels are supposed to be laid out and the effect it is supposed to have on the reader. While it’s true that this is a hallmark of any comic book, I’ve rarely seen it being used so effectively and with such clarity. It’s impossible to tell if Eastman and Waltz had this exact layout in mind when they wrote this issue or if Santolouco put his own particular flair on the artwork, but I think that’s a good thing. I don’t see an artist interpreting a writer’s instructions. Instead, I see a team coming together to create scenes that I can’t imagine existing anywhere but on the comic book page. The first third of the issue is dominated by a mirroring effect where we see the Foot Clan and the Turtles recouping after the events of last month’s issue. This unique format is intriguing, visually stunning, and thought provoking all at once. 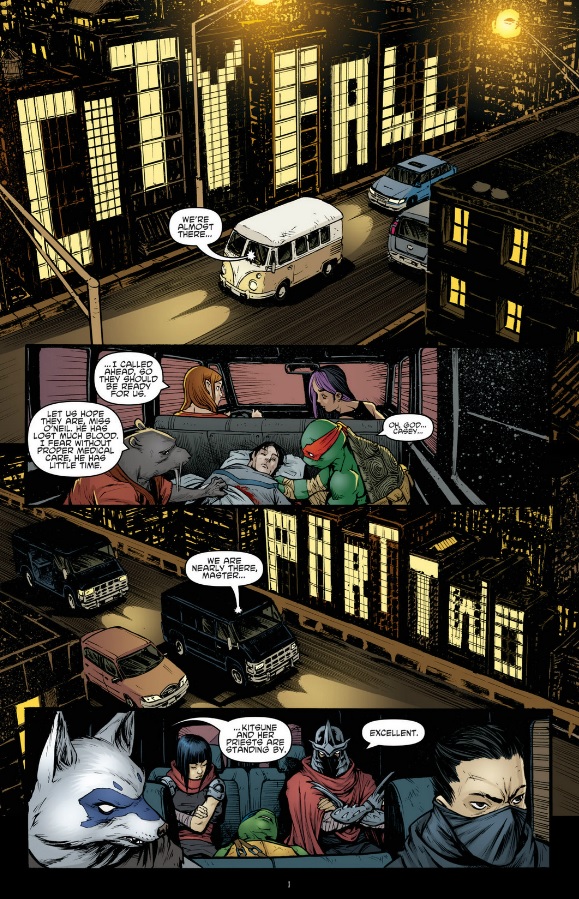 This tool starts from the very beginning and prepares us for what proves to be a very good issue. This set up immediately has us comparing the the Foot against the Turtles and has us weighing their similarities and differences. The obvious visual clues are useful – the similar vans, the unconscious passenger, the identical paneling for each story – and helps us understand what the main theme of this issue is. It also has the double effect of putting us in Leonardo’s shoes. Just as he is being asked to consider who is right and wrong, so is the reader. While Leo battles with his conception of his brother and Splinter, so do we consider who is the better ninja clan, the Foot or the Turtles. By putting us in Leonardo’s shoes the creative team generates a powerful issue that makes us both uncomfortable and exhilarated.

This mirroring effect also brings back some of the themes that have been explored in this series so far. Specifically, it highlights the two ideologies that have been represented in the types of adventures the turtles have had up to this point. The best example of this comes in the comparison of Casey Jones entering the hospital and Leonardo entering the Foot Clan lair.

Again, we have science, here represented by medicine, being compared to magic, employed here by Kitsune. While this could have been a heavy handed comparison in anyone else’s hands here it is subtle and simply hints at has what has become a major theme in this series. This is similar to the stroll we take down memory lane narratively in the latter portion of this issue only in this case it serves to remind of some of the over-arching themes at play in TMNT.

Also, yeah, some other stuff happens. I enjoyed the reveal of exactly how Casey helped Angel in their youth and the flash of hope we receive that maybe Casey’s dad will reform. It’s pretty stunning that among everything that’s going on in this issue we still get a kernel of character development and the seeds of a potential plot point. So, even as it reflects on the past Teenage Mutant Ninja Turtles continues to keep an eye on the future and what it may hold.