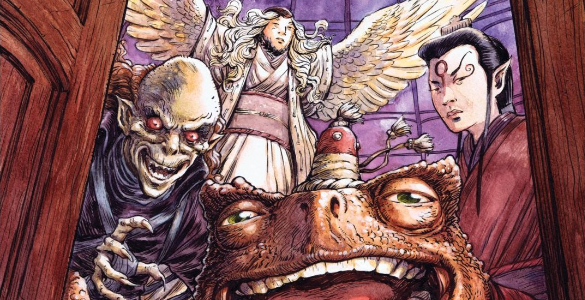 Teenage Mutant Ninja Turtles 71 is a masterclass in quickly establishing an entire group of distinct, memorable characters (seriously, Tom Waltz, Bobby Curnow, Kevin Eastman, Dave Wachter, and Ronda Pattison should be teaching a class on it). This issue has the unenviable task of finally introducing the “Pantheon” in full, but it’s a challenge the creative team tackles with gusto, making each new character immediately distinct, their personalities and relationships with their siblings immediately clear. It not only makes a heaping helping of new information easy to digest, but fun to as well. END_OF_DOCUMENT_TOKEN_TO_BE_REPLACED

Spencer: We live in a world with more distractions than ever. It’s easy to see why — in a world as tumultuous, unjust, and downright screwed up as the one we’re all stuck with today, people need distractions (be they media, parties, sports, etc.) in order to retain their sanity. Too many distractions, though, can have the opposite effect, clouding our judgment and obscuring who we truly are. Some even use these distractions as a form of self-medication, trying to run from problems that are only going to get worse if not faced. Sophie Campbell, Bobby Curnow, and Pablo Tunica’s Teenage Mutant Ninja Turtles Universe 10 explores both those situations, helping its heroes find strength in what’s real, not glamorous, excessive distractions. END_OF_DOCUMENT_TOKEN_TO_BE_REPLACED

Drew: I’ve always been impressed at the way IDW’s Teenage Mutant Ninja Turtles manages to balance the “Teenage” elements against the more sensational “Mutant” and “Ninja” ones. There are obvious advantages to this approach — it lends depth to the Turtles’ characterizations and offers more variety to the kinds of stories they fit in to — but the more I think about it, the more I appreciate that the classic teen obsession with identity and labels are built into their collective monicker. That their title is so verbose has always been a source for humor, but it also plants the seeds for real tensions in their sense of identity — or, at least an emphasis on the adjectives and nouns they associate with that identity. Indeed, issue 66 focuses almost entirely on the identities of its cast, forcing them to ask both what those identities are, and what they might say about what they can or can’t do. END_OF_DOCUMENT_TOKEN_TO_BE_REPLACED

Patrick: The defining quality of my teenage years was business. And not like, going to an office, wearing a tie and making money, but like busy-ness. I’d be at school from 7:30 to like 3:00, then go to play practice for a couple hours, then play in some ensemble (or practice in the winter) and then I’d do homework in the basement until I feel asleep on AIM. I had written a song about that sensation for my high school ska band (Down In Front, in case you were wondering) called “Someone Else’s Time” so I was at least aware that my schedule was spiraling beyond my control. I’ve been busy since, but I don’t think I’ve ever surrendered my time quite so freely as I did when I was 17. The Teenage Mutant Ninja Turtles seem to be suffering from some of the same fractured focus, but it’s remarkable how well storytellers Tom Waltz, Bobby Curnow, Kevin Eastman and David Wachter compartmentalize each threat tearing at the Turtles. END_OF_DOCUMENT_TOKEN_TO_BE_REPLACED

END_OF_DOCUMENT_TOKEN_TO_BE_REPLACED

Taylor: Recently, the Australian DJ group the Avalanches released their second album 16 years after their seminal debut Since I Left You. That this album, Wildflower, was ever released shocked the band’s fans as many expected a follow up never to come. That Wildflower has been well received by fans and critics alike comes as an even bigger surprise to me. Generally speaking, if it takes 16 years to come up new material, that’s not a good thing. Many are the bands who make one good album and then disappear into mediocrity for all time. What I’m hinting at here is that artistic consistency – well, quality consistency – is hard and it’s difficult to churn it out on a regular basis. In that respect, issue 60 of Teenage Mutant Ninja Turtles is a marvel because like the 59 issues that proceed it, it’s so remarkably good. END_OF_DOCUMENT_TOKEN_TO_BE_REPLACED

Drew: Symbolism can be a potent tool for any artist, but its easy for a symbol to feel contrived, forcing the audience out of the work. We seek out and create meaning everywhere we look, so there’s no need for a writer to make those symbols too obvious. Curiously, Gatsby’s green light — perhaps the most famous symbol in all of American literature — is explained openly within the text. The reason we don’t reject this explanation as too on-the-nose is that it is Gatsby’s interpretation; that is, he recognizes and interprets the symbolic nature of the green light within his own life. In this way, Fitzgerald isn’t ignoring our ability to create meaning, but celebrating it by giving us a compatriot on the page. We’re looking for meaning, but so is Gatsby. Teenage Mutant Ninja Turtles 59 offers an almost opposite approach to its symbols, emphasizing intention over interpretation, distancing the audience from the text in less-than-flattering ways. END_OF_DOCUMENT_TOKEN_TO_BE_REPLACED

Patrick: I love the first two-thirds of most horror movies. That’s where the filmmakers have to establish an honest sense of both danger and mystery. That’ll all presumably pay-off in the final act, but it’s sort of remarkable how much more engaging the set up has to be than the pay off. Honestly, by the time a horror flick gets to that pay-off, you’re lucky if the characters do anything more than scream, run and die. So that tension must be expertly wound in order to make that climax mean anything. If you were to watch it in isolation, that scene of Ripley strapping herself in to blow the Alien out the airlock can be slow and almost drama-less. But after two hours of steadily unspooled threats and a growing list of unnerving questions, the scene is masterpiece of suspense. Teenage Mutant Ninja Turtles 56 finds our storytellers quietly gathering those questions, slowly bringing its internal mystery to a fever pitch. END_OF_DOCUMENT_TOKEN_TO_BE_REPLACED

Taylor: Interpersonal relationships are a hard thing. We’ve all judged and been judged on who we hang out with and the types of relationships we have with these people. Chances are, you’ve wondered why Person X would ever date Person Y or what Person A sees in Group B. The thing is, when you’re in a relationship, it’s hard to see it for what it is. It’s only after things get sufficiently good or sufficiently bad that we finally realize where the relationship stands. Basically, relationships of any type are hard for people. When you’re a mutant though, things are only tougher. Not only do you have your animal instincts to consider, but you have the ever shifting landscape of alliances and double-crosses to consider. TMNT 55 explores the idea of relationships and shows how they sometimes lift you up and sometimes bring you down. END_OF_DOCUMENT_TOKEN_TO_BE_REPLACED

Taylor: One of my favorite places to eat at here in Chicago is called Cozy Noodles and Rice. It’s a little Thai place that’s cheap and has robots hanging on the wall. It also has a BYOB policy so it’s not uncommon for my friends and I to bring some beer or wine to enjoy with our meal. Thai food is really flavorful and spicy, however, so often I find that the taste of the alcohol I’m drinking clashes with the taste of the Thai. Separate, they are both delicious. But when combined they just don’t mix well. The lesson I’ve learned from this is the need to cleanse the palate after a heavy meal or thick drink. TMNT 51 is the first issue after the momentous issue 50, and in many ways it acts as a swig of water between two distinct tastes. It prepares us for a brand new turtle adventure while still letting us savor the events which proceeded it.