Mikyzptlk: Do you remember The Transformers? No, I’m not referring to the Michael Bay “film” franchise. I’m talking about the cheesy goodness that was the 1980’s cartoon series. It had a tagline that I’m sure most of you remember: “More than meets the eye.” If you don’t have the theme song stuck in your head like I do, then let me help you with that. I couldn’t help but be reminded of that tagline while reading this issue. This issue is full of characters not being exactly what they seem. While I’m not sure what it’s all adding up to, it certainly seems like it’s going to make Nightwing’s life that much more complicated.

It seems as if the Prankster has been busy. He’s been terrorizing the city non-stop in all kinds of horrifying ways. Most terrifying of which has to be a game of Russian Roulette played via a Ferris Wheel. A Chicago newscaster sums up that the Prankster won’t stop until Mayor Cole turns himself in for embezzling millions of dollars. We catch up with Nightwing as he’s tearing through some of Prankster’s henchmen. Nightwing finds out where Prankster will be holed up for the evening. He arrives to the location only to find that it’s been scorched, and that his roommate Michael has been taken by the Prankster to a boat. Nightwing lucks out and is able to find said boat that is now surrounded by fiery, fuel-soaked water. He manages to rescue Michael and the others, but it all proves to be a distraction. Over at the Mayor’s office, city officials are demanding that Cole give himself up even though Cole claims he is innocent. Suddenly, everyone except Cole ends up rather horribly shot as the Prankster reveals himself. Back on the dock, Nightwing is confronted by Tony Zucco, who says that there is more to the Prankster than anyone knows. 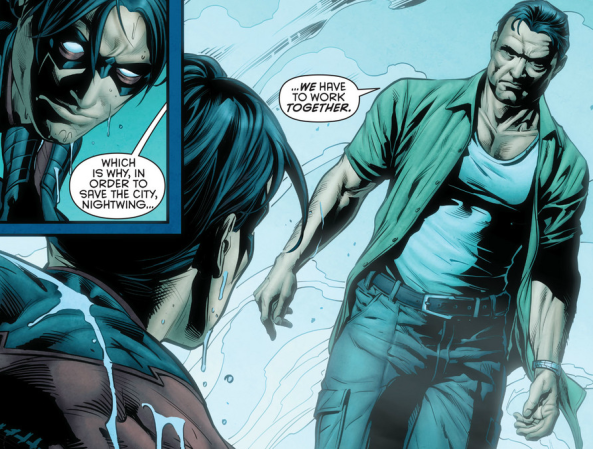 Dunh Dunh DUNH!!! Okay, in all seriousness, this is a pretty great moment. The man that Dick Grayson has been hunting for since his parents murder is suddenly telling his alter ego that they need to work together for the greater good. One of my favorite kinds of twists for any story is when the villain, no matter how horrible he or she may have been in the past, is suddenly forced into the role of an ally. Goku and Vegeta, Buffy and Spike, and let’s not forget Slimer and Venkman, are all great examples of this (though that last one was mostly a joke…mostly). In cases like these, there is usually a lot of resistance at first, but eventually the former adversaries find a way to work together in order to take out the bigger bad. Nightwing has been adamant about putting Zucco away in this arc, to the point that he’s been making some questionable decisions in order to reach that goal. I’m curious to see how he’s going to react to Zucco’s offer, though I’m assuming that Zucco is going to have some very enlightening things to say that might make Dick’s decision easier. While I’m sure that will be fun to explore in the next issue, what I found interesting about this one was how many characters are more, or at least different, than what meets the eye.

We’ve discussed Tony Zucco in previous AC’s. It’s clear that writer Kyle Higgins wants us to feel something for this character. At the very least, he wants us to see that this character has grown beyond the heartless killer of Mr. and Mrs. Grayson. Although I do not think it’s Higgins’ intent to convince us that a killer is a hero, I find it interesting that he is introducing some moral ambiguity into this book. In previous issues, we’ve seen our hero Nightwing make some poor decisions in his quest for vengeance, and in this issue we see a cold-hearted killer make the right decision to go back to Chicago. 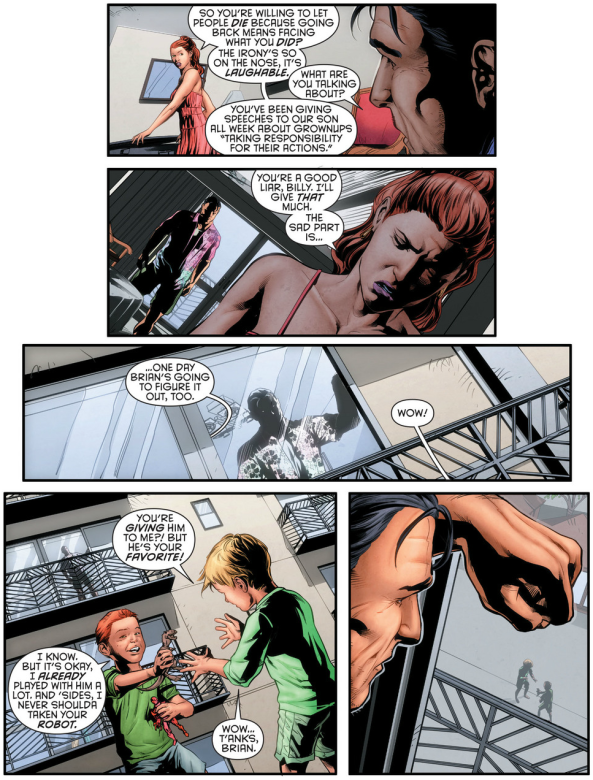 I’m sure that the impassioned speech by his wife was all he needed to hear, but I’m pretty sure it’s his son that made Zucco decide to do the right thing.  Speaking of doing the right thing, is Mayor Cole ever going to give back $52 million dollars? I’m pretty sure there is a lot more to those millions than we know about. Sure, it’s bad if he did steal that money, but did he really do it to give Zucco a new life? Why would he do that? What does it have to do with Cole’s brother? I don’t know, but there’s something else going on here than simple embezzlement. Oh yeah, and then there is the Prankster. What exactly does Zucco know that we don’t? Based on what Prankster said about Mayor Cole in this issue and in issue 21, I’m convinced that Prankster knows the man personally, or at least has been personally affected by the man. Whatever Prankster’s true relationship with Cole is, Zucco knows it, and I’m excited to find out.

Well Scott, I know that you’ve been enjoying this series, especially since Nightwing has hit the Chicago scene. Never seeing Chicago in real life, the setting doesn’t really do anything for me, at least not the way it does for Chicagoans. I’m curious, did you find any scenes in this issue that residents of Chicago would get a kick out of? Additionally, what are your thoughts of a potential Grayson/Zucco team-up? It doesn’t sit right with me, but I’m also dying to see how it goes, which is exactly what I expect Higgins wants me to feel right now.

Scott: Being familiar with Chicago adds to my enjoyment of these recent Nightwing issues, there’s no doubt about it. It feels like a cliche to say that the city is it’s own character, but that really is the case here. Seeing how Higgins has basically started fresh with an almost entirely new cast of supporting characters, the Chicago skyline is actually one of the more recognizable faces we’re dealing with. Having an emotional connection to the city defineitely raises the stakes for me; as fun as it is to play “spot the landmarks”, it’s equally painful to see those locations being destroyed by Prankster, like the Navy Pier Ferris Wheel Mik mentioned above.

Personally, I got a kick out of the scene set atop the John Hancock Center, Chicago’s other massive, all-black skyscraper. It brought back a memory from my time living in Chicago, when a couple friends came to visit from out of town. They spent the day exploring downtown, and came back satisfied that they had finally been to the Sears Tower. But after checking out the skyline later that night, they realized the building that visited was actually the Hancock Center, two miles away from the Sears Tower. I’m still not sure how they made that mistake, though I guess the two 100+ story buildings can be difficult to distinguish when looking up at them from ground-level. 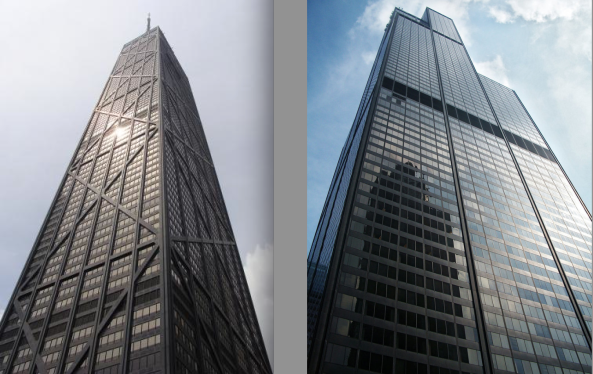 Mik, you’re certainly right about there being a formula to the hero-villain team up. It’s pretty much a given that Dick will work with Tony to stop Prankster from destroying the city. As much as he hates Tony, we know that Dick will choose saving countless innocent lives over getting revenge against one man. The real drama is in what Dick will do with Tony once the city is secure. Could he possibly forgive the man who killed his parents? Higgins has worked hard to give Zucco redeeming qualities, but nothing can make up for Tony’s past crimes. It’s hard to imagine Dick working so hard to find Tony, only to let him walk free in the end, but it’s clear now that Tony isn’t the vision of pure evil Dick imagined him to be.

As for Prankster, I’m…intrigued? Higgins leaves us with the most aggravating kind of cliffhanger; all we know is “there’s more to the Prankster.” That could mean anything. I don’t know how crazy my expectations should be. Prankster could just be some random guy Tony met in prison. Or he could be Dick’s long-lost twin brother. I prefer cliffhangers where the juicy bit of information is revealed, but the reaction is withheld. I think I’d be more excited if I knew Prankster’s identity, but had to wait to see the repercussions of that information coming out. But that’s just me. And, well, I’m excited either way!