Patrick: Hey, is it just me, or does it seem like comic book movies are growing more courageous in what they’re willing to put on the screen. I blame Thor for laying some of the sillier cards on that table and daring the audience to object. Subsequent superhero movies have followed suit: the Krypton sequence in Man of Steel is long and unapologetically alien, Avengers featured the fucking Chitauri, and the upcoming X-Men movie will feature the bonkers time travel insanity of Days of Future Past. Battle of the Atom feels like a challenge to those emboldened film franchises: as if to say: “You don’t know what crazy is. Brother, this is Marvel Comics, we’ve got three versions of Beast interacting with each other – we know crazy.”

Before I launch into the recap proper, let’s all give it up for the stunning get-you-up-to-speed page near the beginning of this issue. It effortlessly takes the most salient points from over two dozen issues of All-New X-Men and Uncanny X-Men and manages to place the revelations therein in the greater context of what the X-Men have been going through. To make matters even better, the page is a beautiful, orderly collage of some of the most active players in this story. The icing on the cake is that imposing Grim Reaper hogging some prime real estate right in the middle of the page. That gives this recap page some weight, like it’s a royal crest, or tarot card or a portent of non-specific doom. You’ll also notice that Professor X, Wolverine, Cyclops, Kitty and Beast are all behind the Reaper, while the other mutants are in front — notably Jean Grey, who almost blocks out his whole body. If we wanted to, we could look at this image for hours, just speculating on what any of it means. It’s a wonderful page, and a credit to the whole medium – it catches up new readers and engages long-time fans. It’s basically perfect.

Of course, it also helps that it comes on the heals of one of the more disorienting flashforward spreads I’ve ever seen. Magik has traveled to the future, just to make sure that the future is worth fighting for. What she finds there is at once familiar and alien – we catch glimpses of characters we sorta recognize duking it out in huge rumble with Sentinels. After this WTFlashforward, and the elegant recap page, the story begins in earnest.

Cerebro alerts Kitty Pryde to a new mutant appearing on the scene – one that summons dinosaur-dragons to do her bidding. Kitty whisks the Original X-Men to the scene of the disturbance where a fight ensues. It’s going pretty well until a bunch of Sentinels show up and start indiscriminately attacking all mutants. The tides turn yet again when Old, Evil Scott brings his band of merry mutants into the fray. In the action, Young Scott is killed. Temporarily. Triage is able to revive him, but everyone notices that OE Scott ceased to exist during the short period Young Scott was dead. No surprise to readers: time travel has consequences.

Okay, right now before we talk about anything else: who do we think those characters are? In the back is definitely Ice Man (he evidently gets craggier with age) and in the front is Beast (more beastly with age), but the middle row gets tricky. I assume the brunette with the shock of white hair is Rogue, and the hooded old man next to her appears to be an ultra-grizzled Deadpool, but the other three are question marks to me. Taylor – do you have any guesses? Commentors?

I love how simple the action is in this issue. Basically, it’s a single fight, with a single clear objective. It’s only as the fight plays out that the enormity of the consequences of said fight become apparent. It’s an incredible ride that ratchets up the tension right up to the point where Young Scott is actually killed in battle – it’s at that point that the visual narrative freaks out and the stakes are revealed to be earth-shattering. We get the immediate consequence of OE Scott vanishing, but as the panels blur and shake, there’s an implied second consequence: a world-ending paradox! This sequence is so amazingly disorienting – check out the way it forces you to read from panels out of order just because the speech balloons are presented in a wonky order: 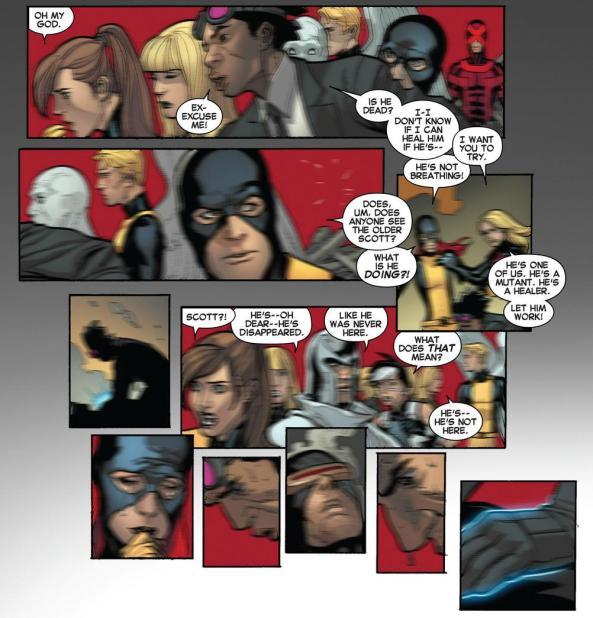 Oh man, that’s so cool. Those last five panels being ever so slightly further apart as you read from left to right… again: this is another perfect presentation of what’s happening on this page. It might have been an illusion caused by the blurred effect, but I felt like I was shaking with excitement while reading this. The art team here is lead by Frank Cho. I read the first couple issues of his writer-artist run on Savage Wolverine, and while it never really took off for me, I was struck by how he likes to anchor his two-page splashes with a single large drawing on the left page, and then placing panels on the right page over the background that continues from the previous drawing. You can see it here in the spread where the X-Men first show up in the skies over Phoenix and again in the spread where Cyclops wakes up. It gives all the action such lovely continuity and flow. Any issues that I had with Cho’s artwork have been mitigated by the other artists credited on this issue: Stuart Immonen and Wade Von Grawbadger (both of whom have been killing it on All-New X-Men).

Taylor, I loved this issue. I think I could post just about every panel and talk about how effectively it tells this story, put I’ll happily leave something for you to talk about. As your first real foray into X-Men comics, how did this feel to you? I know there’s a lot of back story, but most of these characters should be pretty familiar to you — except for Triage who’s one of OE Scott’s new Uncanny X-Men. Man, how much pressure do you think that kid feels now? If he lets one of the original X-Men die, he could be destroying reality. No big deal. Also, what’s the significance of this fight taking place in Phoenix? (There are 100 correct answers to that last question, and they’re all super fun.)

Taylor: You’re obviously really excited about this issue and I can’t blame you. From the the title page to the team portraits at the end of the issue Battle of the Atom (or BOTA!) 1 is filled to the brim with suspense and danger. Yet, while I think this is all good and fun, there are a lot of things happening in this issue which prevent me from endorsing it as enthusiastically as you. While there isn’t any one item that prevented me from enjoying this issue, there are several smaller missteps that took me out of the action, and therefore the agency, that is supposed to dominate these pages.

In your intro, Patrick, you talk about the effect Marvel movies have on their still life brethren.  Basically, the more things get nuts in the movies, the more things get even nuttier in the comics. This is a lot of nuts to deal with and most audiences like to cut them with a bit of humor. This is to say, those who make the Marvel movies are geniuses at making their movies accessible to die-hard comic fans and layman alike through the use of humor. One has only to look most of the lines Tony Stark has in the Avengers movie to realize this. And while the use of comic relief is effective and almost necessary in epic Marvel movies, it’s not really needed in every epic comic event.  In BOTA! Ice Man carries the jester mantle and his implementation of “humor” is a B effort at best.

While the hearts around his face are a nice, goofy touch, the dialogue is hard to stomach no matter how it’s depicted on the page. Ice Man calling “dibs” on Animax is a pretty sexist “joke” no matter the way you view it. The supposition that she will inherently fall in love with an X-Man is insulting and to top things off Ice Man makes a dated reference to a TV show to display how he is stricken by her physical beauty. Classy stuff!

Later, in a bid to save the All-New X-Men from being wiped out by sentinels, Kiddy summons her compatriots around her. The idea is that once they all come into contact with her they can share her power and go “intangible” to avoid all sorts of death rays scrambling their bodies into so many atoms. The moment is good at showing how the All-New X-Men make a good team, but it’s undercut by clunky dialogue.

While I understand these X-Men come from an earlier time, I don’t think they would be speaking in a way that is reminiscent of the high-flown language associated with the middle ages. Nowhere else in this issue is this type of language even hinted at so I have to wonder why it is used here. It’s an odd choice and it takes what is essentially a good scene and turns it into something that is easier to laugh at than take for a life or death scenario.

Dialogue aside, some of the staging in the issue also served to distance me from much of the action. Throughout the issue the X-Men (from all time periods) speak of the poor norms who could be hurt by the sentinels or mind dragons. It’s best we take the X-Men’s word on this because the reader is only privy to see nine of these alleged people-in-distress. I assume the number is supposed to be higher but we see not a shoe nor shirt of these others. Despite the seemingly small number of people actually in harm’s way, two manage to get caught under a dumpster. Cyclops (from the long-long-ago) jumps out to save them and gets blasted by a laser in the process.

The issue of Scott’s valor aside, I couldn’t help but feel like this was a tired trope being used to move the action forward in the plot. Too many times have we seen a hero put his or herself in danger to save a civilian and eventually pay the price for their heroism. It would have been nice for Cyclops near death experience to have come at the hands of a more inventive device, say, a dragon materialized out of the mind of a mutant? I don’t question the validity or necessity of having Cyclops almost die, but I do wonder why it couldn’t have been portrayed in a more interesting and unique way.

You may read all this and assume that I think this issue is garbage, however, that’s not the case. I liked much of what happened in this issue and I think what you wrote about, Patrick, is spot on. I suppose it’s simply just frustrating to read an issue that, while getting so much right, let’s itself be marred down by small lapses in quality. But then again, when things get more than a little crazy, maybe it’s hard to make everything hang together.