Today, Shelby and Scott are discussing Batman and Robin 23.2: Court of Owls, originally released September 11th, 2013. This issue is part of the Villain’s Month event. Click here for our Villains Month coverage.

Shelby: For being a new villain in the DC universe, the Court of Owls finds itself very firmly rooted in Gotham’s history. They’ve existed since the beginning, secretly running the city behind the scenes, shaping it into the image they want. They claim to be Owls,  but operate more like snakes: hiding and striking from the shadows, fleeing when the going gets tough. That is the lesson James Tynion is teaching us in this Villains Month issue; the Court of the Owls will always retreat to the shadows when faced with an unbeatable adversary. And those shadows go a lot deeper than you might think.

As Gotham tears itself to pieces over the news that the Justice League is dead, an unnamed Owl takes his daughter deep into the Court’s catacombs. As he heads down, he teaches her about the Court. He explains the Court’s strength is in its history, its roots. Because the history of the Court runs so deep, they always have a place to which to retreat and rebuild. The story is told through a series of vignettes of the Court and various Talons heading back in history; we even see the beginning of Felix Harmon’s fall from grace. At last, the father and daughter reach their destination and the object of their journey; they’re going to unleash the First Talon upon the world. 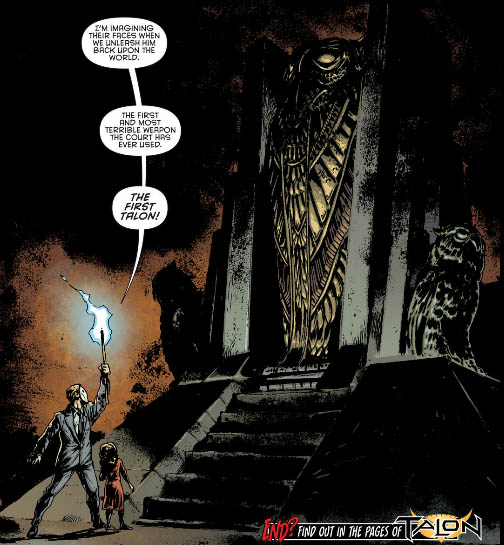 Before I started reading this book, my first reaction was, “why?” We spent A LOT of time with the Court of Owls not that long ago; an Owls issue this month just seemed redundant. I thought about it more, though, and realized the Court isn’t like the rest of the villains, both in their longevity and reach. The rest of the bad guys we’ve seen are like children compared to the Court. This is a group of villains who existed hundreds of years before our heroes; that in and of itself makes them worth spending some time with. Tynion gets that, and that is exactly what he gives us. He understands that in the current, lawless nature of the DCU, the Court has nothing to offer. They represent what happens to you when you break the rules they’ve set. Right now, all the rules are broken, so they just aren’t that threatening. So that’s why we get looks into their past, and the reminder of the importance of their history. It’s a very smart way to handle this particular group of baddies.

Stories of a secret society that has stayed alive through the centuries by retreating and rebuilding doesn’t sound particularly interesting to look at, which is where artist Jorge Lucas comes in. His high contrast shadows and extreme lighting turn this book into a pulpy horror comic. I could use any panels from this issue as an example, but one of my favorite sequences is when another Owl tries to stop the man and his daughter from reaching the First Talon. The young girl…takes matters into her own hands.

The blood splatter on the mask, the muted colors, the heavy cross-hatching and shading that almost obscure what color is there: come on, that is just plain awesome. It really encompasses what the Court is all about. There’s an elegance to Lucas’ style, a sort of refined, Victorian feeling. At the same time, it is gruesome and chillingly scary. Just look at the acting in this sequence of panels: 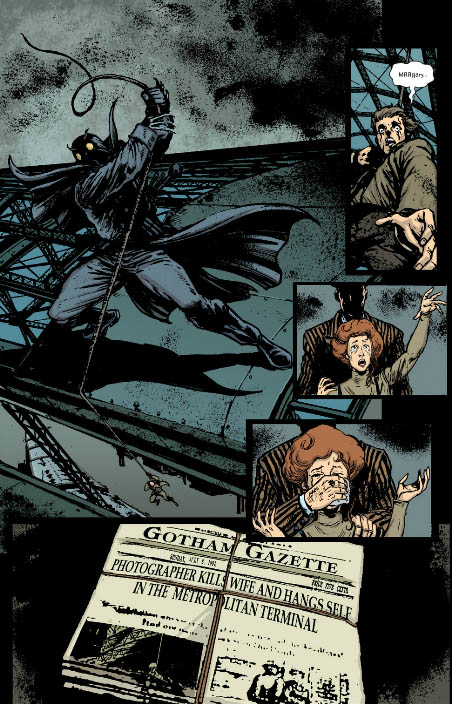 That is some really nice story-telling right there. It’s compact and tidy, and perfectly tells the story with virtually no dialogue. The comment from the man in a previous panel that the Gazette is owned by members of the Court is very neatly concluded with that headline in the last panel. It’s a simple reminder that the Court is powerful enough to kill two people in a crowded train station, and get away with spinning whatever story they want to tell.

Throughout the whole issue, both Lucas’ art and Tynion’s story encompass the entire Court, from their elegant, classy exterior to the bloody, ruthless murderers that power the group. I went into this issue thinking I wasn’t going to like this book, and now I think this is one of my favorites of the month so far. Scott, what do you think? Was there enough to this issue that, despite Night of the Owls and a Talon title, you were able to get something out of it? How fun was it to see Harmon in all his glory?

Scott: I don’t know if “fun” is the word I’d use to describe it. Horrifying. Disturbing. Gruesome. I’m not sure what I’d call it exactly, but seeing Harmon sitting in a brothel, surrounded by dead women and boasting about how many people he’s killed that night is one of the most appalling images I can recall.

I don’t know how you’d hope to control a man like that. Aside from his sheer physical dominance, he simply wants blood. He’d rather kill you than not kill you, and there’s no rhyme or reason to it.

Like Shelby, I was pleasantly surprised by this issue. I didn’t think a Court of Owls story could offer anything new at this point, but the father’s narration along with the different vignettes really illustrates how much history the Court has in Gotham. It has existed for hundreds of years, and has the power to go after anyone it wants, even the Mayor or the Police Commissioner. If there’s one thing I’d nitpick about the Vignettes Tynion shows us, it’s that they’re too focused on the Court trying to maintain its secrecy. The Commissioner, the photographer, even Harmon — they’re all pursued by the Court out of fear of unwanted attention. But we already know the Court is good at keeping itself hidden. I’d rather see more instances where they’re pulling the strings, exhibiting their power and influence over Gotham. Their deal with the Mayor gets at this, but I hoped for more.

This issue’s greatest success is in its horror elements. “Exquisite Dread” is about as perfect a title as they could have chosen for this issue. Each vignette is laced with a sense of impending doom, leading to the inevitable appearance of a Talon. Absolutely chilling is the Police Commissioner’s son reciting the Court of Owls rhyme or the noose dropping down behind the photographer. The best representation of pure dread comes as the Mayor gives into the Court’s wishes, then realizes even that isn’t enough to appease them.

The acting in those three symmetrical panels has a truly haunting effect. Look at the way the Mayor’s eyes stay glued to one spot as his mouth drops open and his face gradually turns to an expression of horror as he realizes his life is crumbling to pieces. I’ve never seen a man’s descent into madness shown so succinctly. Lucas’ art takes the suspense to another level throughout the issue. If there’s one thing I would say is “fun” about this issue, it’s looking at how he depicts Gotham through the various time periods. His heavy inks are a perfect match for the dark tone Tynion sets, and each panel is creepy as heck. Makes for a pretty good villains issue.