“Does it have a happy ending?”

Greg: Whenever I recommend a movie to my dad, or tell him I’m working on a new project, this is his first question. He’s a high school assistant principal and deals with a lot of heavy stuff. At family dinners, when my mom would ask him how his day was, he would often just sigh. He wants his entertainment to provide respite and closure he doesn’t often get in real life. He’s a man who, at the end of Inception, stood up in his seat and yelled at the screen, “What?!”

I’d like to think I’m more open to the darker stuff than him. Yet while reading this black and white anthology series, I felt my gut stiffen and sour. I felt like I was being shown evil things for evil things’ sake. I wanted to stand up in my seat and yell at my comic book, “What?!”

Batman stories, by default, traffic in the murkier depths of human emotion, and I have no problem with that; matter fact, that’s why I enjoy Batman stories. Yet red flags went off for me several times in this issue, perhaps because of the exploitation of these depths, rather than genuine exploration.

Let’s start with the worst: the story “Into The Circle” boasts some truly astonishing, horrifying, and beautifully grotesque artwork, courtesy of Rafael Grampa. This is detailed work, where every nook, cranny, and mutation of the human form is presented in all its twisted and gnarly glory. Gotham City often feels like every idea and icon of American cities rolled into one; here, it feels like they were shoved through a sausage churner from Hell. 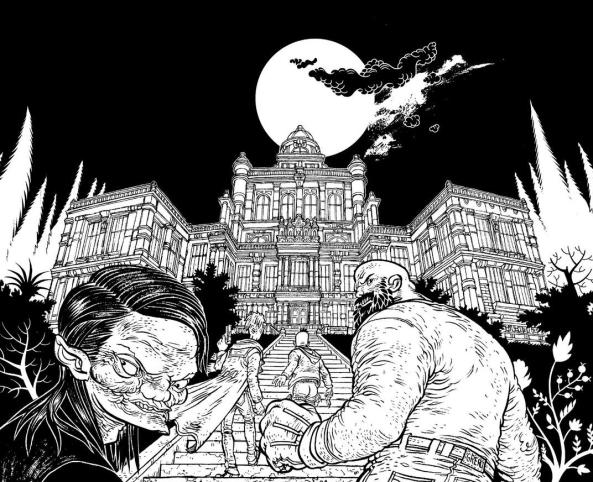 This story resolves in a strange and downright unethical way. It’s framed by the Joker telling some thugs to subvert expectations and rob a mansion instead of a bank; they arrive, Batman’s there, punch, punch, punch: the hero wins, right?

Then, the twist. The Joker wipes his makeup to reveal it wasn’t the Joker at all! It was Alfred! This was a setup, a contrived ruse enacted to guarantee the thugs would be at this mansion. It’s the textbook definition of entrapment! Were it not for Alfred and Batman’s doings, these thugs would not have committed these crimes. Alfred and Batman made them do it. If these thugs are all about robbing banks, why not go stop them at a bank when they’re, you know, actually committing a crime? Why all this shady rigamarole? Why dress up like your freakin’ arch-nemesis?

It feels like the desired effect is triumph. Look at how clever Alfred and his master are! Look at how their plan worked perfectly, and all those guys got their faces punched in! Instead, I just want an internal affairs investigation and eventual grand jury indictment.

“A Place In Between” takes us carelessly further into the muck. Scarecrow’s latest scare tactic is to hurl Batman into a River Styx-esqe hallucination, where he must helplessly witness his life traumas and know he’s destined to Hell. Heavy stuff, which in theory, is an effectively therapeutic tactic for Dr. Crane, which culminates in one of the most taboo acts in our culture: the murder of a child.

In practice, however, these representations of things we consider “evil” amount to nothing more than a rote checklist that might read at the top, “Things That Push People’s Buttons” — which is, to be fair, what Scarecrow is trying to do to Batman. These are intense and interesting ideas being presented, particularly under the therapeutic guise of examining past traumas. They deserve a similarly therapeutic exploration; I want to know what these actions of violence, definitions of evil, and nature of vengeance mean for Batman, Scarecrow, Gotham, society. Instead, because there’s no time to percolate, ruminate, or dissect, one representation of shocking horror careens into the next one, rendering it crass and toothless.

In a tone-deaf meta aside, Styx-Scarecrow (Styxcrow?) comments that Batman murdering a child is quite the “plot point.” Is Rafael Albuquerque trying to examine the inherent artifice in crafting a “dark” story? If that’s the case, having a strong point of view about that would be preferred to having no point of view about anything.

Don’t get me wrong; the issue’s not all pointless regurgitation of evil. While the first story, “Manbat Out Of Hell,” deals with the reprehensible taboo of pedophilia, Dan Didio makes an astonishingly effective point, rendered efficiently and exquisitely by J.G. Jones. When Batman realizes that the kids in peril are Man-Bat’s offspring, and the attendant is responsible for horrific actions perpetrated against these kids, the focus shifts. The attendant grabs a gun and fires futilely at Man-Bat, insisting that he is blameless, that he’s not a monster, that the thing that looks like a monster is at fault. Batman, the kids, and the reader know that’s not true, and it’s a downright poignant realization. In life, monstrosity knows no set definition of physical signifiers. Rather, it’s a dark impulse that exists under a seemingly normal veneer. Comic books often present monsters as looking like monsters; to see the inverse is quite astonishing. 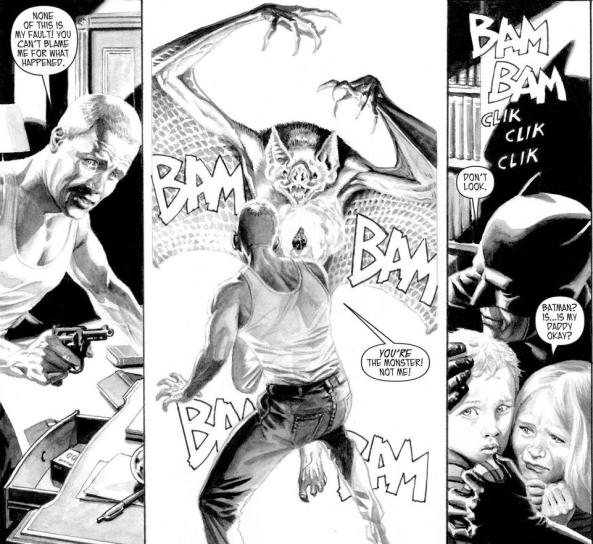 What do you think, Patrick? Am I too sensitive, too wanting of clean-cut closure? There’s an interesting exploration of Batman as a human being rather than the symbol or idea he’s often rendered as, particularly in Albuquerque’s depiction of Wayne’s anguish-filled eyes in “A Place In Between,” and in Wayne’s childhood ruminations in the starkly poignant “Winter’s End.” Because we’re dealing with the fallible nature of humanity, should I cut the issue some ethical slack? And doesn’t “Silent Knight…Unholy Knight!” just plain excite you for the holidays?

Patrick: “Silent Knight… Unholy Knight!” is a weird little story – moreso for its format than its content. In fact, the story is neat and tidy Batman-fare: there’s a serial killer on the loose that strikes down children’s parents in crime alley. (Incidentally, people have got to learn to stop taking the short-cut through crime alley – it’s better to be late than dead.) The killer is motivated to do so because his parents were taken from him at an early age. He’s just revisiting the same fate upon countless Gotham youths. Batman comes in, kicks him in the nuts and punches him in the face – bingo-bango.

It’s a charming little tale, complete with a villain whose origins are Batman’s, just held up to a funhouse mirror. In that way, it’s almost the antidote to Greg’s complaint about the oppressively dark direction of the rest of these stories. Here’s someone who had all the same stimulus as Batman, but who let all that darkness drive him to evil. It’s several shades darker than luring jewel thieves back to your mansion to beat ’em up, so he falls squarely into the villain category.

But it’s strangely presented as a kind of silent film, complete with title cards conveying the characters’ dialogue. The story’s writer, Michael Uslan, is a noted Batman scholar, and has a producer credit on every one of Batman’s screen appearances since Tim Burton’s Batman (1989). So it sorta makes sense that the writer would have a personal connection to the power of Batman in film. I like that Ulsan seems to recognize that, for him, writing a Batman story for a comic book is akin to writing a silent version of the thing he’s spend the last 24 years doing: putting Batman into action. While I don’t have any images of a silent-film-era-Batman to fall back on, I like being confronted with the idea that those films and comic books aren’t so dissimilar. Frankly, I’d never considered it before this issue.

Greg, your point about “Winter’s End” being the most poignant of the bunch is totally legit. The art in that story is just fascinating. The plot is scant: Batman battles his way into an extra-cold part of town and powers down the machine that’s responsible for altering the weather, all while reflecting on a time his father rescued him from a collapsed snow-cave. Alex Nino’s art is impenetrable, with pieces of visual information popping up left and right that are hard to reconcile with the patient memory Jeff Lemire plays out in the voice over. But that memory is all about being lost, trapped, alone and confused, but resting in the knowledge that there’s someone out there that loves you and will save you. That’s precisely how it feels to read this story. Seriously, the second page is so dense, and so full of impossible-to-parse information that the reader’s understanding of the story almost has to be surrendered entirely.

And even though you can’t really grasp any of that on your own, you’re rewarded for trusting Lemire and Nino, both of whom work so elegantly as to render the obtuseness of the storytelling irrelevant. The memory is heartwarming enough, and that bitter sweet coda makes it all the more compelling:

But it’s getting harder to hear him… harder to make out the words. Sometimes I still strain to hear his voice in the darkness. And while not a lot scares me these days, I am terrified that soon I won’t be able to hear him… that I’ll forget what his voice sounded like at all. So I cling to the memory. It’s not a lot. But it’s all I need.

That gives us permission to read the Batman stories that don’t jive with our perception of the Dark Knight — which is how Greg rightly assess the bulk of the stories in this volume. We have our memories of who Batman is to us, and while the sheer volume of other Batman stories might come close to drowning out the stories we treasure, we will always have those memories to cling to.

And honestly, that’s what Batman Black & White is about, right? It’s about holding up the Rorschach Test that is “Batman” and asking different artists and writers to tell us what they see. Also, call me a sucker, but I love the title “Manbat out of Hell.”