Homer: Next, I’ll tell you the origin of Maggie’s pacifier.

Patrick: “Whys?” are important. At least, we want them to be. The Simpsons episode “Lisa’s Sax” explores the origins of — you guessed it — Lisa’s saxophone. The story features Bart’s disenchantment with the education system, the Simpsons’ poverty and the cold swirling mystery of raising a child. It’s insightful and heartfelt and honest: we learn about a crucial piece of the show’s mythology and just how much it informs, and is informed by, the series’ cast. It makes the saxophone Important in a way it hadn’t been before. But the episode is tagged with the exchange above, which readily admits that not all origins can be so fulfilling, no matter how integral a piece of mythology is. The Deadpool Annual explores both the origin, and subsequent termination, of Deadpool’s white voice over boxes. Is this a saxophone story or a pacifier story?

Because Deadpool measures time in “issues,” the annual starts “5 or 6 issues before Secret Invasion,” which puts it around 2007-2008. He’s staked out on the top of a building in Hell’s Kitchen, waiting for an opportunity to assassinate Matt Murdock. Hey: a job’s a job, right? The problem with trying to kill anyone in Manhattan is that the place is lousy with superheroes, supervillains and… whatever we want to classify Madcap as… Madcap is a healing-factor dude with the power to make people go crazy just by looking at them, and he doubles as being just about as lonely as Deadpool. Anyway, the assassination attempt goes awry when Thor jumps to Murdock’s defense and handily pulverizes both the healers with his lightning powers. Deadpool and Madcap come back — they both always come back — but they’re reconstituted in one body – Deadpool’s. Those white voice over boxes are Madcap’s as he exists inside Deadpool’s head.

Years later and on the eve of Marvel NOW!, Deadpool is back in Hell’s Kitchen attempting to murder Murdock. Again. This time, two heroes come to Murdock’s aid: Luke Cage and Thor. Cage starts the altercation with a cranium-rattlin’ punch, which knocks Madcap into the driver’s seat. Finally in control of Deadpool’s body, Madcap makes Thor and Luke Cage dance around a little bit before commanding them to rip his own body in half. This way, each half heals a full body — one for Deadpool, one for Madcap.

Any good exploration of the state of Deadpool is going to reveal how wretchedly lonely he is. Wade is gross and crass and annoying — by all rights, the only people that like him are those fortunate enough to be blessed with an abundance of ironic distance from him. It’d be absolutely horrifying to spend a day with him, but watching his adventures is thrilling and hilarious. I’d never read a Deadpool book that had the white voice over boxes, but I had assumed that those were the loving words of either the author or the reader — some source that knew Deadpool well enough, but had enough distance from him to love him. This issue posits that the voice is an in-universe character that develops the same affection for him.

I find that development a little problematic for where Deadpool is right now. If you’re reading Brian Posehn and Gerry Duggan’s excellent Deadpool series, then you know that Deadpool currently has Agent Preston in his head. Unlike Madcap, Preston is nothing like Deadpool — she’s a law abiding citizen, a wife and a mother. There’s a real relationship forming between them, where they have to give a little bit on their priorities and values in order to accommodate those of the other. As an example, Deadpool is less violent with Preston around — sometimes he’ll even ask permission before doing something horrible. But his relationship with Madcap is almost played for laughs — take a look at their good-bye.

Not only do they blow past the potentially vulnerable moment of sharing a piece of Madcap’s origin story, but they end it on an “I’ll call you” joke.

My gut says that this issue cheapens the bond growing between Preston and Deadpool — after all, it’s not the first time someone learned to love him this way. But maybe the difference between Madcap and Preston is the point: Deadpool essentially learns to love the feeling of not being alone, albeit with someone that is almost exactly like him. We have to learn to make easy friends before we can learn to make hard friends.

Because much of the conflict — such as it is — takes place inside Deadpool’s head, Evan “Doc” Shaner has most of the burden of making the story engaging. Shaner seems to have been given license to draw everything and anything, and he gleefully populates the pages with just about every New York-based superhero you can think of (plus some mutants for good measure), and his tour through Deadpool’s history features a slew of images that I would consider absurd if I didn’t know that this was Deadpool we’re talking about. His greatest strength, however, is showing Madcap and Deadpool interact, frequently letting Madcap be negative white space on the page — including one page that is all white space. My favorite example comes at their last moment together, and it lets them play a very cartoony sight-gag in a new way. 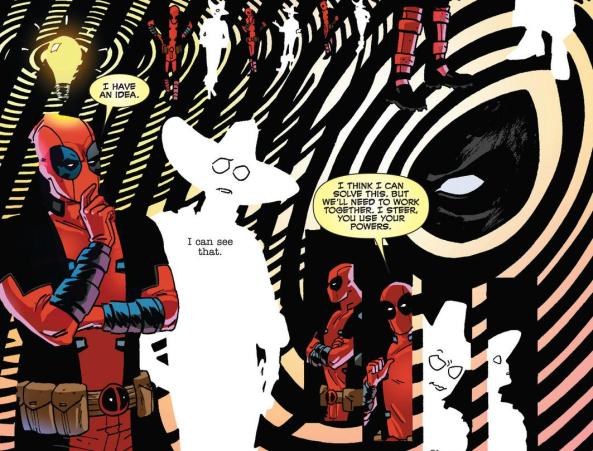 Scott, what did you think about this issue? Do you think I’m reading too much into Deadpool’s ability to have friendships? And how about getting an answer to a question you never asked? Was this the story of Lisa’s saxophone or Maggie’s pacifier?

Scott: Like you, Patrick, I’d never read a Deadpool with those white boxes, so this was a total pacifier story as far as I’m concerned. I’m not so sure it’s even trying to be a saxophone story. It’s so thoroughly silly, both in concept and execution, and the one attempt at a heartfelt moment at the end of the story feels pretty out of place. It is not a “crucial piece” of Deadpool’s mythology, like Lisa’s saxophone’s origin is for The Simpsons, but a story devised for cracking a bunch of superhero and NYC jokes (while providing a few readers peace of mind about those white boxes).

I should make myself clear — I don’t mind at all that this is a pacifier story. I think it’s a hilarious issue. Sure, the timing is a little weird — it probably would have fit better before the ‘The good, the bad, and the ugly’ arc, which got incredibly dark — but I had no trouble getting into it. I’d be surprised to see Deadpool continue on in this tone, but for a stand alone annual, it works.

Patrick, to answer your first question, I think you might be reading into this issue a little too much, if only because it’s mostly such a light hearted issue. That doesn’t change the fact that, like you said, it’s in conflict with where Deadpool is right now as a series. Really, it’s strange that this this title now has two separate cases of a character living inside Wade’s head. Making Madcap responsible for the white box dialogue could’ve been a clever bit of retconning, if it didn’t involve a conceit that is already being used by the same title! Patrick, I don’t know if this cheapens the bond Wade has with Preston, but it certainly doesn’t seem quite right.

OK, so this issue presents some problems, but if you’re willing to look past how strangely it fits in with everything else going on in Deadpool, it has some really funny lines. While Shaner finds a way to sneak just about every Marvel hero into one panel or another, it’s Thor who steals the show. Acker and Blacker go to town on the God of Thunder and his diction, like when he interrupts a fight between Deadpool, Madcap and Daredevil on his way from Starbucks. Or, better yet, when Deadpool tries to get inside Thor’s head (metaphorically, this time).

I’m conflicted about this issue. On the one hand, it destroys the idea that Agent Preston is the first person Wade has shared a real bond with, the first to become his friend. On the other, it’s funny and goofy and we’re probably not supposed to think about it that hard in the first place. I’m just going to choose to think of this issue outside of the context of the rest of this Deadpool volume, and appreciate it for the fun issue it is. This is totally a pacifier story, and aside from a few brief instances where Acker and Blacker try to get a little sappy, it plays that role well. Is there anything wrong with being a pacifier story anyway? Who knows what crazy stuff might’ve happened to Homer on the way to the Safeway?