Ethan: Adult life teaches you to juggle. Whether it’s as a stay-at-home parent, working a 9-to-5, or holding down more than one job at the same time, everything comes down to how well you can keep it all in the air. There’s the work-life balance, figuring out how to be in a serious relationship, managing different personalities in the office — there’s never a shortage of things to keep you on your toes. Natalia Romonova, aka Natasha, aka Black Widow knows a thing or two about this, though her version of finding balance is a bit more exotic and demanding than most. That is, unless YOUR average day involves infiltration and throwing people out of windows.

Natasha definitely finds ways to keep busy. First, she talks a suicide bomber into handing over the detonator and dropping his guard long enough for her to cuff him and chuck him out a window (on a bungee cord) for pick-up by the police. Then she’s got a business meeting in a park with her finance guy / personal agent who sets her up with a gig in Dubai. A gig that involves sneaking into a hotel in disguise, rappelling up the side of the skyscraper on a grappling hook, subduing a gaggle of guards and a belligerent assassination target, and then killing the assassin sniper with a well-placed rocket. Then it’s back to New York City to unwind and feed the stray cat that’s trying to adopt her.

Not to gush TOO hard, but this issue had basically everything I was hoping for and almost none of what I was dreading. We get some gadgets, some sneaky spy stuff, some close quarters combat, and a huge explosion; we are NOT subjected to gratuitous plunging necklines, nor conspicuous stripper poses, nor scenes of Seducing the Big Mob Boss, nor blinding lens flares off of Natasha’s curvy skinsuit. It makes me a sad that I even have to point that out, but all in all, let’s just say that this issue did a great job of reintroducing the character without stuffing her into the Comic-Book-Girl box.

Honestly, between the subject matter and the art, I was strongly reminded of the Hawkeye title, which is high praise for writer Nathan Edmondson and artist Phil Noto as far as I’m concerned. We already knew that while she isn’t saving the world with the Avengers, Natasha has the self-imposed side-job of doing good to try to make up for some of the sins in her bloody past.

I know it’s the intro issue, but the dialogue gets a little forced at this point — I wish we’d gotten this plot point as more internal monologue rather than such an on-the-nose conversation, but maybe we needed a moment to breathe in between action sequences, anyway.

This “what so-and-so does when they’re not Assembling with the Avengers” is an obvious parallel of Hawkeye, but unlike Clint, Black Widow has her act together, every move carefully planned and every flying kick surgically precise. At least so far — I’m sure something will have to go a bit wrong in the issues to come, and it will be interesting to see such a composed and poised character react to the chaos. Where Clint just kind of sulks his way into a puddle of broken ribs and black eyes, I have a feeling Natasha will have more dramatic crises; I love Hawkeye, but Natasha’s vastly superior competence is bound to her to way more in over her head before she finally slips — the stakes will be higher when she falters, and I wonder if we’ll see any cameos, if she’ll have to fall back on friendship to bail her out like Kate Bishop does for Clint.

So we know what Black Widow is up to; how about some more about who she is, where she comes from? As is fitting in a story about a super-spy, the only bit of back-story we get actually turns out to be a lie. 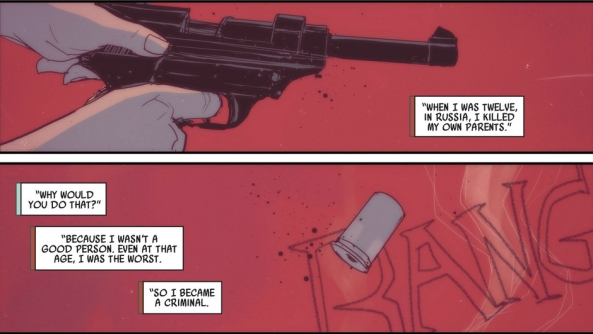 It was a good enough line to get her through the door and close enough to snip the cord on the detonator though, so who cares if it wasn’t true. From the other glimpses of Natasha as a person that we do see, Natasha is clearly someone who’s deeply conflicted about her past. She works to maintain the classic layer of emotional armor we often see in espionage types, even going so far as feeling the need to explain to the stray cat the terms of their relationship: I feed you sometimes, you don’t get to lick me, I’m not adopting you, we’re just running into each other once and a while like this, capisce? It’s a fun moment that pokes fun at that trope of a male spy laying down the law to whatever girl he’s just slept with — you don’t get to call me, I won’t be calling you, I’m leaving in the morning, don’t make this out to be anything more than that — but this scene does it in a playful way that both delivers the point and also a close-up on an adorable cat.

Finally, the art was spectacular and deserves much more room than I have. Sketchy, flowing lines and diffuse fields of color serve as a beautiful frame for the laser-tight, dark, crisp details that grab the eye and don’t let go. 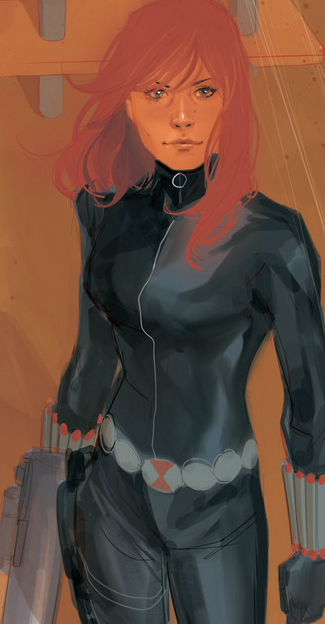 Those eyes are in danger of being photo-realistic, while the jumpsuit zipper and shading approximate her figure without cluttering the panel. There are a ton of wonderful eyes in this issue — I don’t even want to know how many portraits Noto has drawn, but it’s he’s clearly a few thousand of them past the point at which he became a master at capturing the proportions, lines, and immediacy of a face.

Shelby — you’ve got quite an eye for art and never have trouble explaining the otherwise ineffable reasons of why something visually works: care to share some of your favorite panels and join me in my gushing? Or were you hoping for something else in this one?

Shelby: How could I hope for something else? This book was a delight! While I tend to prefer my ass-kicking ladies to be more of the Viking warrior type, there’s no denying Natasha’s amazing skillset. But while I love the action sequences, especially with Noto’s gorgeous art, it’s the mundane scenes that really catch my attention. Ethan, you’re right about the scene with the lawyer in the park, it was a little bit too exposition-y. But the scene with Natasha at home with the cat lends so much insight to the character: three pages, little dialog, and some cleaning, and I feel like I know this woman. I love the idea of her being cool and detached even towards a stray cat; she lays down the rules and boundaries like she thinks the cat will respect them. While it shows her emotional armor existing in both her private and work life, the scene also shows us a little crack in that armor. She’s reaching out to the kitty because she needs that contact with someone. Not only that, she’s almost reporting to Liho the Cat; Natasha explains what she did, that she had to hurt one guy real bad, so that’s where the blood came from.

After she goes inside, though, things get interesting. In that they get a little boring; Noto takes the time to show us Natasha rinsing out her wine glass. To me, it just underlines her methodical and poised personality and serves to ground her a little bit. She’s a mysterious unstoppable former assassin and Avenger, but she knows you have to rinse out your glasses before you put them in the dishwasher. The following page is absolutely my favorite. 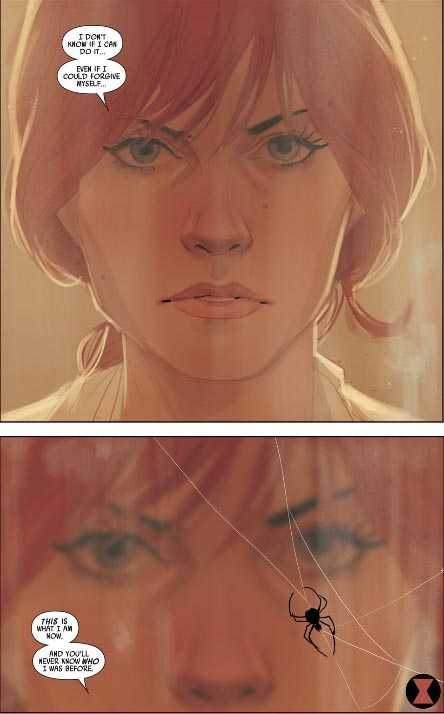 Did I already mention Noto’s art in this book is just beautiful? That first panel close up of her face reminds me da Vinci’s Head of a Woman.

You can see the artist’s hand in the brushstrokes, but the result is still clean and precise, not loose and sketchy. Both images have a contemplative feel to them, but where da Vinci’s woman is peaceful and tranquil, Natasha is determined and focused. This book doesn’t look anything like anything else I’m reading, and I’m really impressed with Edmondson’s handling of the character so far. I don’t know much about Black Widow, and Edmondson has made it clear she won’t tell me, and I’m really satisfied with that. I can’t wait to see where this closed-off bad-ass will go from here. Hopefully she brings the cat with her.