Taylor: Since the dawn of pop-culture, antiheroes have been those ill behaving scallywags we love despite their flaws. They may not act right all the time, but we love them despite, if not explicitly for, their flaws. In the annals of American culture, the antihero has frequently eclipsed their more traditionally heroic counterparts — just look at Han Solo or Walter White. This trend has naturally extended to comic books and while many protagonists of comics are antiheroes, few are outright villains. In case you couldn’t tell by its title, The Superior Foes of Spider Man ­­focuses on a villain, who by virtue of his narrative is an antihero. And while we all enjoy a good antihero, it is a perilous line they walk, and issue eight displays how precarious their position is. It begs the question, just how shitty can a protagonist be before we’ve had enough?

Fred is being paid a visit by the Chameleon, who wants the head of Silvo Silvermane, which Fred promised to get him while robbing the Owl. The Chameleon is putting the hurt on old Frank, who has interspersed dreams about women and other such things between bouts of interrogation. During one of these dreams the Chameleon realizes that Fred lifted a picture of a maskless Dr. Doom from the Owl’s hideout. The Chameleon takes this picture as payment for not getting the head of Silverman, which is actually in the hands of Shocker. Later, Frank goes on a date (hot!) and realizes that maybe he should be trying harder to be a villain.

This is the first issue of Superior Foes where Fred’s casual assholeness begins to get tired. Before, it was easy to shake off his less than redeeming qualities: after all, he is a villain. There’s also something about Fred that causes us all to see a little of ourselves in his character. Maybe it’s the snarkiness with which he treats virtually everyone he meets or maybe it’s just because he is a little pathetic. In any case, it’s always been easy to at least tolerate Fred’s character, if not wholly sympathize with him. In this issue, however, that charm is really nowhere to be seen. The issue opens with one of Fred’s dream sequences and even in this setting he’s pretty much a jerk. He makes swimsuits disappear and he fantasizes about treasure. You would like to think that in his dreams Fred would be a little more honest or at least genuine but in this sequence no such thing happens. The argument could be made that this dream is a fair representation of who Fred is, which makes his character somehow even less appealing than before.

The dream sequences do give storytellers Nick Spencer and Steve Lieber a chance to flex some creative and entertaining muscle, however. The appearance of President Obama, pirates, and Galactus Antlers all add a comical element to Fred’s dreams that save them from being nothing but Fred’s self-serving attitude. All of the elements in play in the dreams are pretty random and like a lot of dreams appear to be nonsensical. We all know the feeling of things just happening or appearing in dreams and Spencer and Lieber represent this well when a pirate ship appears in Fred’s dream, because…well just because. 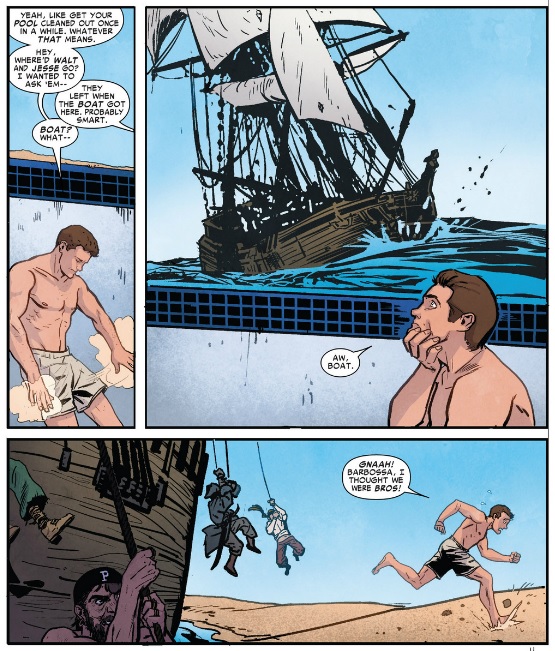 The image of a water about to overflow into a pool is reminiscent of surrealist paintings and creates just the right amount of cognitive dissonance upon viewing. It’s also a small thing, but in the next panel we see Fred running openly across a sandy beach. What happened to the pool he was trapped in before? It doesn’t matter because he’s in a dream and that’s how they work. Neither of these tricks is particularly amazing or artful but the subtlety of their gestures is quite nice. In short, the dreams feel like actual dreams!

Outside of the dreams the best portion of this issue is Fred’s date. Eventually, for the sake of his relationship, Fred has to come out of the closet about being a supervillain. The reaction is about as good as you would expect but for once in his life, Fred is actually honest and genuine when describing his chosen profession. When asked if he’s killed anyone, he can’t help but admit that he has.

For all of the “moral ambiguity” Fred talks about, it’s hard not to sympathize with him in this instance. Sure, he’s killed, but in his line of work, who hasn’t, so why not give him a break? That sentence just written is pretty insane and it’s a testament to how we can sympathize with a truly terrible person if they are genuine and earnest. This makes Boomerang more of an antihero more than anything else in this issue and this series will benefit from more moments like this to humanize someone who is inherently hard to like.

Greg! Do you think Fred is an insufferable asshole or do you think he deserves a kinder nod? What will happen to Silvermane’s head? Will Fred’s gang ever actually give him the comeuppance he deserves?

Greg: It makes sense that you spent much of your discussion focusing on what makes an antihero fascinating, if not sympathetic, to view as the central character of a narrative. Spencer and Lieber engage with these kinds of ideas themselves, albeit in a tongue-in-cheek, fourth-wall leaning, Deadpool-esque pop culture mash-up kind of way. Fred’s dreams represent the media abetted idealization of being a “villain” jammed up against the hard cold truths of reality. The image of Walter White and Jesse Pinkman “cooking” with President Obama is suitably silly, but also speaks to Fred’s latent desires to be taken seriously, glorified, possibly invited to a presidential barbeque like his television (anti)heroes. Yet even in his dreams, he can’t have the simplest of hedonistic pleasures; he tries to imagine his desired woman naked for his benefit, but is given a rude awakening by the humbling toilet waters of real life. Even in his voiceover response, Fred can’t help but compare it to another famous cable antihero. 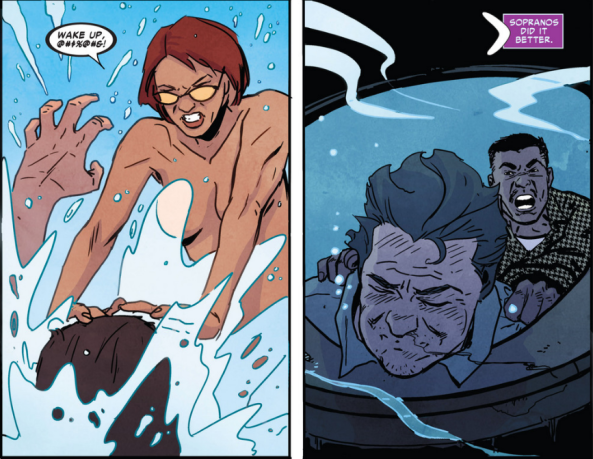 You mention that Frank’s moment of honesty on his date rang sympathetic for you; his earnestness humanized him, made him easier to understand. For me, the general snarkiness of the entire tone of the comic made that difficult. Even when he’s trying to open up and explain his methodology, the general stresses of the job, and most importantly his failures, the voiceover pipes in to quip about how he’s white lying because it’s just a second date, that he “usually” doesn’t kill civilians, that his romantic rapport comes from taking advice from Iron Man. When we finally get into full-blown, “I’m gonna turn my life around!” speech territory, I honestly don’t believe him; nor do I believe that this poor woman would give advice like “be the best super villain there is”. Thus, the ironic final image does nothing for me, as the drama it’s trying to undercut rings so false and insincere.

By premise alone, I feel like I should love this issue. The idea of a satirical look into an underdog villain who’s trying his best to play with the big dogs (or at least appear to be) is ripe with potential — particularly if he cracks jokes and references pop cultural touchstones all the way. However, when these comic digressions and snark-filled points of view detract from rather than enhance the narrative stakes, it ultimately fizzles in the execution. Not to do some Fred-esque postmodern comparing, but when you look at this versus a similarly constructed set of issues like Gerry Duggan and Brian Posehn’s Deadpool, well, it’s not hard to see what comes up looking superior.

5 comments on “The Superior Foes of Spider-Man 8”