Drew: Ah, the learning curve. It’s a testament to the resilience of the human spirit that there are things that everyone simply sucks at when they start. Some stick with it and get better, others don’t, but the fact that so many people are out there parallel parking or whatever just goes to show what we’re capable of when we put our minds to it. Of course, a good teacher helps, and the learning curve has a funny way of exaggerating the type of help we get. At our noblest, humans are capable of providing age-old (or even personal) wisdom to n00bs, but we’re just as capable as having a few yuks at the expense of the new guy. As much as I enjoy a good larf, I’ll never fully understand the inclination to let the new guy muddle through the same mistakes everyone else has made. Sure, maybe he needs to experience those mistakes firsthand, but how are we to know if nobody’s ever bothered to help anyone avoid it? At best, it’s negligent, and at worst, it’s malicious, but it always leaves the new guy worse off. Unfortunately, Alec is still in the early stages of learning the ropes as the Avatar, and every one of his mentors seems more content to watch him fuck up than offer any kind of help.

The mysterious robed group we saw last issue explains that they’re the Sureen — Avatar worshippers who are effectively Alec’s personal assistants. All they ask in return is that he grow them mind-altering fruits for them to munch on. Brother John is bemused to see the Sureen, but is too distracted by Capucine to offer much in the way of advice. Oh, right: it turns out Brother Jonah is the Avatar Capucine made her deal with all those centuries ago. Anyway, The Wolf and Lady Weeds use all of this distraction to sneak back to New Orleans, where the Wolf has designs to cash in on some “active concerns” he left behind. Alec sends Brother Jonah and Capucine after them, but then uses that exact moment to ask the Sureen to perform an ancient ritual which allows Alec to inhabit one of their bodies. Only, the Sureen aren’t who they say they are, and they sneak off with Alec’s uninhabited Avatar body and poison the human body he’s jumped to.

Well shoot. Not only is Alec totally powerless, but everyone he knows and trusts is 60 miles away in New Orleans. It sure seems like he put his faith in the wrong people, but in Alec’s defense, Brother Jonah gave them basically the cagiest introduction ever.

How could Alec have gone wrong with the information that the Sureen do “things”? Seriously though, how infuriating is it that Brother Jonah evades the question by treating Alec like he’s some kind of trigger-happy monster? That’s the kind of shit that gets you put back in the green. Still, Jonah did say that Alec had “nothing to fear from the Sureen.” Obviously, he couldn’t have seen this coming, but, like, shouldn’t you have a buddy there the first time you try transferring your consciousness into another body?

Actually, Brother Jonah is down with the buddy system for this issue’s other trippy metaphysical experience scene, and he and Capucine seem downright quick to cuddle. Did they have a thing back in the day? Is one developing now? Neither character is at the center of this issue, but their actions are so well-observed as to keep them alive even as the spotlight drifts away. That’s a testament to the strength of the collaboration between Charles Soule and Jesus Saiz — I haven’t been shy with my praise for either, but they truly are two great tastes that taste great together.

Heck, I’m even enjoying the fish-out-of-water stuff with The Wolf and Lady Weeds. Soule absolutely nails their ignorance, but it’s Saiz that sells exactly how bumbling they are. Of course, the highlight of their story line is when they wrangle the situation back into their control in the lawyer’s office. 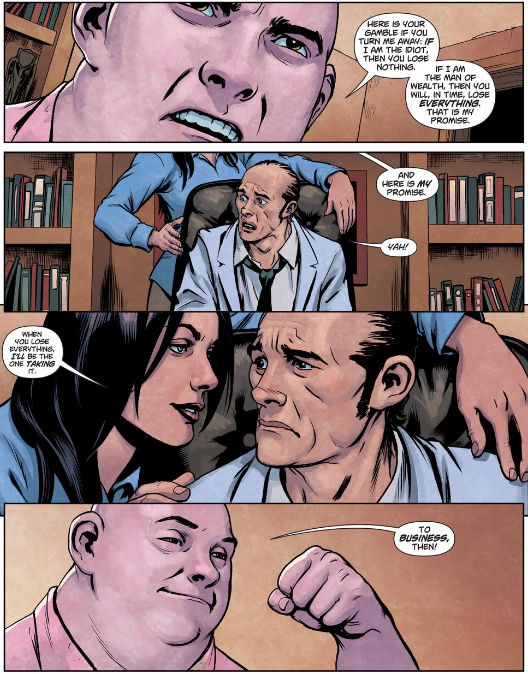 I was torn between including this, or the three panels where The Wolf switches into intimidation mode (which features some stellar acting by Saiz), but as a showcase of this creative team’s abilities, it’s hard to beat this sequence. The first panel of the page (not included) shows the lawyer already taking a defensive posture to The Wolf’s verbal assault, but it’s not until Lady Weeds chimes in from behind him that we see how scared he is. Each shot supports the next, building up to that expert piece of blocking. By the time we get to the stinger, it almost doesn’t matter what The Wolf says — we just need to see his face switch from stern to smug.

Suffice it to say, I enjoyed the heck out of this issue. My biggest complaint (as usual) is that it packs in too many fun details for me to praise. I suppose that’s why there’s two of us, though, Shelby! There’s so much left to talk about (hello gorgeous drug trip!), so I’ll leave it to you where you want to start.

Shelby: Oh my goodness, that drug trip; let’s start there!

This is absolutely gorgeous, Saiz and colorist Matthew Wilson really out-did themselves. I adore the way Saiz gave up his traditionally rectangular panels for a straight-up Yanick Paquette homage spread. Paquette is obviously the man to go to for trippy, plant-based hallucinations, plus it’s a nice nod to the original creative team on the book: very classy.

I was also a little confused by how circumspect everyone was being about the Sureen’s “tasks.” This may be more a reflection on me, but my immediate thought was that it was something sexy. And I could still be right, I suppose; I’m sure Avatars of the Green want to get laid as badly as anyone else, and they would need a human body to do it. Heh, “do it.” That would also explain why Brother Jonah was cool with heading to town while the ritual went down; he’s a gentleman, and he wanted to leave Alec alone to get his freak on. The real question is, of course, if this group isn’t the Sureen, who are they and what do they want with Alec’s body? My first thought was some government group (because it’s always some government group), but I’m ultimately hoping for a drug company wanting to use the avatar for their own little drug tree, selling small doses of plant hallucinogen for big bucks.

I cannot wait to see what sort of shenanigans the Wolf and Lady Weeds will get into. What sort of “active concerns” could the Wolf possibly have left behind. I was guessing from his pre-fat-sweaty-slob appearance he was around in the 1700s, maybe even earlier; how could he still have irons in the fire? I thought Weeds was the ruthless one, but she’s just pure crazy. Wolf is far more cunning and conniving than I thought; he’s the one Alec needs to be wary of. And, like I just told our friend Mike, there’s a solid chance I’ll end up with at least some part of Weed’s forthcoming ink tattooed somewhere on my person. Even without seeing it, there’s a solid chance. So far, my biggest letdown of the avatar-to-human transformation has been the loss of Weed’s beautiful character design, but if she’s going to be bad-assed and tattooed I think I’ll be able to get over it.