Today,  Drew and Shelby are discussing All-New X-Men 24, originally released March 12th, 2014. This issue is part of the Trial of Jean Grey event.

Drew: As much as I can understand the appeal of seeing your favorite superheroes fight, the strained justifications for why they were fighting in the first place always got in the way of it being any fun. Shouldn’t Superman have heard of Batman? Shouldn’t they know they’re on the same side? These problems are exacerbated in cohesive publishing universes where you can confirm that, yeah, every hero should basically have heard of every other hero by now. Brian Michael Bendis discovered a creative end-run around this problem in All-New X-Men — the time-displaced original X-Men ultimately missed a LOT of introductions to Earth’s superheroes — which finds its logical conclusion issue 24 as they face off against the Shi’ar Imperial Guard. I mean, honestly, how would they know they were on the same side?

The issue picks up at the titular Trial of Jean Grey, which is promptly interrupted by J-Son. He brings up all of the ethical issues of holding someone responsible for actions they might do in the future, effectively throwing the trial into chaos, and giving Jean an opportunity to escape. Meanwhile, the Guardians et al. are able to hijack a Shi’ar ship  and sneak onto the planet in hopes of rescuing her. They’re confronted by six members of the Imperial Guard, and a big ol’ fight ensues, culminating in Jean’s arrival and assent that she actually is guilty.

As usual, this issue is absolutely gorgeous. Stuart Immonen is tasked with keeping track of an array of settings, from the Shi’ar’s massive trial arena to multiple crowded spaceships, all of which he pulls of with his customary aplomb. More importantly, he’s able to nail all of the subtle emotional moments — a particular feat in an issue that zips so readily from scene to scene. I’m particularly enamored of the sequence of Jean on the run — a sequence Bendis smartly doesn’t clutter with any dialogue. 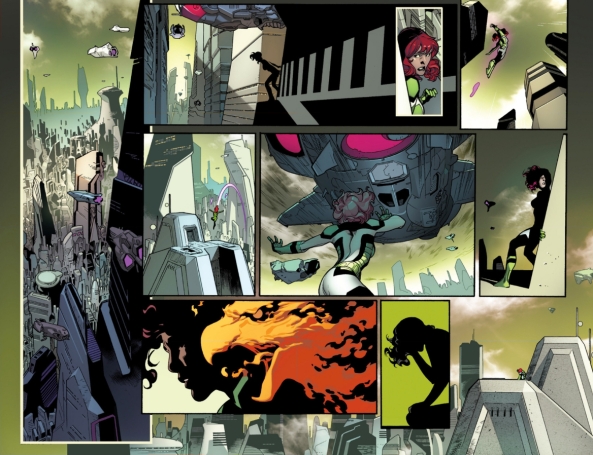 Unfortunately, all of these crystal-clear emotions are jumbled together a bit haphazardly, and start to lose their teeth when taken all at once. Is this story about Jean facing her future? Scott reconnecting with his father? The power dynamics of Shi’ar and Spartax? It attempts to be all of these (and more), which effectively muddles the delivery. I had a similar problem with Battle of the Atom, which also started out with a compelling emotional through-line that was quickly lost in a swirl of shifting loyalties, locations, and times. We’ve thankfully avoided any timeline wankery here (so far as we know), but Bendis has compensated with other complications to keep our heads spinning.

Like, what exactly is J-Son’s motive here? He claims to be fighting for justice, but he seems content to simply have screwed things up at the trial. 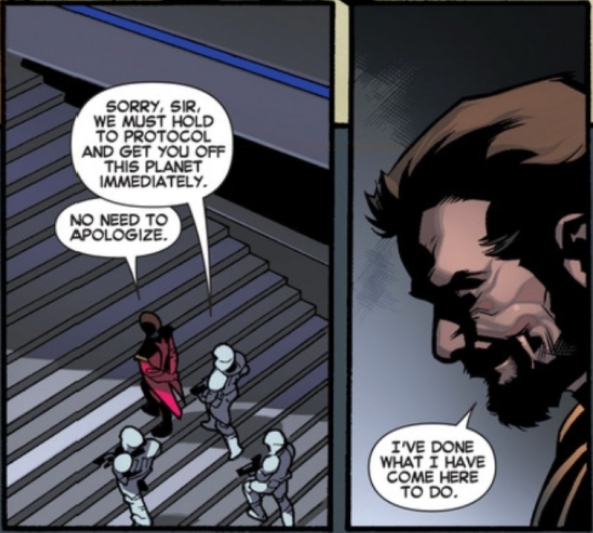 He has no way of knowing what’s going to happen next, so why is he so pleased with himself? Does he know something that the rest of the characters don’t? Does it matter? If not, why show this to us? Without answers to those questions, this exchange is cryptic to the point of uselessness, making me wish the space had been given over to showing us exactly how the X-Men are handling all of this.

I suppose that my be my bigger gripe about this series: as the X-Men are pulled from one huge problem to the next, we’ve really lost the focus on their emotional state, which was what made this series so strong in the first place. I can’t remember the last time we really checked in with how they were doing, leaving this series no real emotional leg to stand on. Those early scenes where Kitty talks Jean through her first bouts of telepathy, or Logan has to treat Scott like another kid really sold me on this series, but we’ve almost entirely lost that emotional through-line in all of the high-flying action. Like, they’re on a frickin’ spaceship — shouldn’t that warrant more than the obligatory freak-out from Bobby?

I guess that’s my way of saying that, while there are parts of this issue I enjoyed, I feel like this series has lost its purpose somewhere along the way. I mean, if they aren’t going to address the specific weirdness of traveling to the future to fix the problems you’ll eventually make, what’s the point of using these characters, anyway. I suppose you can argue that this trial is about addressing the problems Jean will eventually cause, but it’s not until the very last line that we get any solid sense of how she feels about it. At this point, I kind of feel like none of the characters pass Kelly Sue DeConnick’s sexy lamp test — they’re all just props in a convoluted plot machine.

Am I being totally unfair, Shelby? I’m actually kind of reminded of the Star Wars prequels — the emotional core has been replaced with space laws I couldn’t be bothered to care about. I realize that’s the equivalent of comparing a person to Hitler, so I’m ready for you to tell me I’ve gone too far.

Shelby: You’re not totally wrong, though I definitely think you’ve gone too far with your Star Wars comparison. I feel like Bendis is relying more on those emotional moments you mentioned from early in this series’ run to carry this book forward. That would have probably been enough, if we didn’t just come off another madcap crossover adventure. I miss those emotional beats; Bendis was able to give these kids real, understandable reactions to the totally bizarre (even for comics) situation around them. Jean was trying to control her budding psychic and telepathic powers while dealing with the fact that she was living in a future where she’s kind of a villain and also dead, and I related with her struggles. It’s difficult, too, to feel really connected to the characters in a story when there are 2 dozen of them. 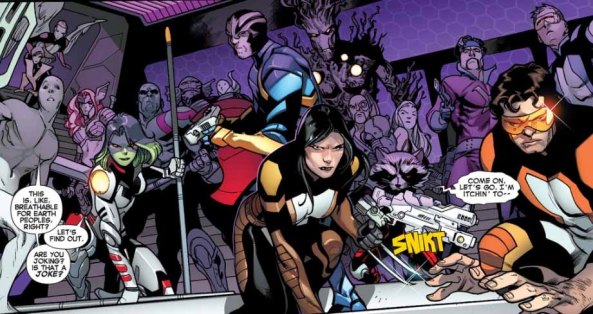 Seriously, there are almost 20 people in that panel, and I don’t know most of them. There are so groups of unfamiliar characters running around it’s real easy to lose sight of the tender moments: Scott’s reunion (sort of) with his dad last issue, Jean’s fear and sorrow as she faces her tribunal.

That’s not to say I didn’t enjoy this issue. What we might be missing in emotional beats Bendis more than makes up for with space hijinks. Angela floating in space like debris to get on the Shi’ar ship was a ton of fun. Every contribution from Rocket and Bobby, every “I am Groot,” made me giggle out loud. And there are some good emotional moments as well, most of them featuring Jean in largely silent spreads.

I love the way Immonen creates tension while showing so little of Jean’s face. The fear and uncertainty in the first panel, the shock in the second, and the fury in the third perfectly tell the story. The final panel, with the sudden concern on Oracle’s face and just Jean’s fingertips pressed against her cell tell us exactly what is going to happen in short order. Immonen is giving us some very subtle and elegant visual story-telling.

I’m still having fun with this title, although I am definitely beginning to feel that missing emotional core Drew mentioned. With Guardians 13 concluding the Trial of Jean Grey story (and alluding to some pretty drastic consequences for Jean), I hope we can give the crazy shenanigans a rest and get back to those personal moments that really made this book stand out early in its run.