Patrick: This issue borrows its title from one of our favorite / least favorite entries from TV Tropes. The trope is known as “Let’s You and Him Fight” and refers to the all-too-common occurrence in superhero comics that forces heroes to fight each other. Presumably, this stems from our desire to see our hypothetical “who would win in a fight?” conversations played out on the page. But it’s not like we ever really get an answer to that question — those hero-fights always end in ties — and the brawl is just prelude to a team-up. We may be watching Batman vs. Superman in 2015, but they’ll be chumming it up in Justice League of America in 2016. This is Loki we’re talking about here, so it’s not quite so simple. Take a look at that title again: it’s “Lets You and Him Fight,” conspicuously leaving the apostrophe out of “Let’s.” (Someday, I won’t care about the absence of apostrophes in titles, but that’ll have to be next week.) Al Ewing takes our understanding and expectations of this trope and subverts them by applying a handful of others, creating a truly innovative piece of fiction made up of all old pieces.

I’ll try to summarize the plot, but like I said, Ewing plays so many genre tropes against each other that the various twists are turns are tricky to navigate. Let’s try our best. Sigurd, the ancient hero and rightful bearer of the truth-blade Glam attempts to steal the sword back from Loki. As a matter of coincidence, Loki had recently been given the order to bring Sigurd in or risk incurring the All Mother’s wrath, which would call him back to Asgard in Sigurd’s place. So Loki, who might have been cool with Sigurd waltzing in and reclaiming this sword, is actually motivated to bring the guy in. Y’see, Loki’s come to enjoy his life in Midgard.

That development is actually one of my favorites: for Loki, hanging out on Earth is a vacation. He’s able to make food that he actually likes, he can play video games all day — hell — he’s even got a girl! Loki likes living in Manhattan and wearing jeans and a green hoodie. Incidentally, he also seems to like having some Thor comic book art on the wall. You guys, the life Loki — a trickster god of Midgard — wants is that a 20- or 30-something in 2014.

Intriguingly, this mundane existence is also what Sigurd is after. He’s going after Glam so he can strike up a deal with Kaluu, Master of Black Magic, so he can bypass Valhalla and be reincarnated instead. Sigurd double-almost gets his wish. First, he’s tricked by Kaluu, who actually turns out to be Mephisto doing a classic “tricked you into selling me your soul with a punny contract” routine. But second, both Sigurd and Mephisto are tricked by Loki, who has substituted his own contract, granting Loki the ability to banish both of the other signers to other realms. ‘Phisty goes back to Hell, Siggy gets zapped over to Asgardia.

This issue is basically a non-stop pile-on of “here’s what’s really going on” and the narrative gymnastics needed to keep up that level of surprise do make the story tough to follow. Even though the issue starts with Sigurd and Kaluu striking up a deal, we don’t know what Sigurd is after until 14 pages later. Then, over the course of the next three pages, his fate is reversed twice and both times without the hero himself having any real agency over what’s happening to him. Obviously, the real hero here is Loki, who understands these stories better than anyone else. Again, Loki and Ewing seem to be linked by their shared understanding of narrative tropes and the power that comes with leveraging them.

My favorite example of this has got to Loki’s “off-screen” death. Loki and Sigurd fall into a dumpster where their fight (presumably) reaches an epic conclusion. Lee Garbet can’t show us anything that’s going on inside, but through a series of escalating sound effects, and one particularly surprising stab, implies the whole brawl. 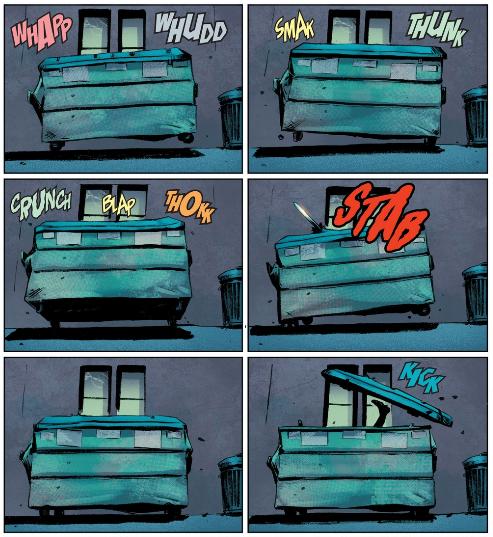 Sigurd believes that he’s killed Loki here. We know better: if we don’t see a character explicitly murdered before our eyes, we can be pretty well assured that they’re fine and we’ll see them again in just a few minutes. That’s something that never occurs to the characters in these situations — someone falls off a cliff and we don’t see what happens to them? Oh, probably dead — no need to investigate. It’s that built-in assumption that Sigurd makes that allows Loki to make his play with the second contract. It’s convoluted, but all as a function of Loki’s will. His superpower is manipulation, and this issue shows him manipulating the very storytelling of his own series.

Which brings me back around to the apostrophe-less title. “Lets You and Him Fight” refers to the circumstances that allow this fight to take place. Instead of being declarative, the title is descriptive. The fact that Loki has Glam in his possession Lets (Loki) and (Sigurd) Fight. Now, that manipulation was put into motion by the Old Evil Loki from the previous issue, so look out — there are two narrative manipulators on the loose!

Suzanne! Goodness gracious this was a dense issue. It looks like Loki’s going to be waging war on the All Mother, and his band of buddies is already looking to be hilarious (especially if Thor keeps wearing that A-ha shirt). I like that this implies a specific goal for the series — Loki fighting for his right to chill on Earth — rather than the nebulous mission-of-the-week structure suggested by the subtitle “Agent of Asgard.” What do you think? Does this suggest an exciting new direction, or dull new direction or nothing new at all?

Suzanne: Patrick, don’t you want to read a Thor book set in the 1980s? Can’t you picture him headlining a punk band with his flowing blond locks? Back to the series at hand (and not the next Hawkeye, you heard it here first folks). This issue draws on our collective memories of pop culture and playfully nods toward popular tropes in entertainment. But does it rely too much on familiarity?

Take the page where Mephisto tricks Sigurd into signing the “Standard Infernal Pact.” That immediately made me think of Ariel signing a magical contract with Ursula in The Little Mermaid. Al Ewing’s execution of this scene is intentionally tongue-in-cheek. Mephisto is almost blasé in his delivery when he says, “A terrible deal, naturally” and then reads the fine print and discovers his undoing. Who better to trick someone at their own game then the God of Mischief?

Other plot points in this book straddle the line between playful and trite. Loki fighting on the clothesline with his magical seven league boots is an amalgam of every Errol Flynn movie and the opening scene of Aladdin. Even the dialogue acknowledges its influence, as Loki says: “Turn a washing line into… a swashing line. Also buckling.” While this feels a bit formulaic, I appreciate how Loki fits into the greater narrative of myths and storytelling. For that matter, Kaluu transforming into Mephisto is a nod to countless dramatic reveals of the Big Bad in movies. Maybe it’s the over-the-top dialogue… but this issue plays into my inner Disney nostalgia.

As a new reader, this book is quirky and fun with the episodic pace of a sitcom. But it could provide a more natural jumping-on point for those of us who don’t want to backtrack a few issues. Time bouncing between vagaries like “Now,” “Then,” “Earlier” and “Later” doesn’t help in this case. Ewing makes good use of ironic captions introducing several characters that are relatively unknown to me. The final page sets up an interesting premise for future issues — Ewing looks to further invert Loki’s relationships with Thor and the All-Mother. Anyone else want to see more Mephisto cameos?