Yes, but what does it mean?

Drew: We tend to talk a lot about the meaning of a given comic around here, but we’re rarely explicit in what we think “meaning” means. Or, more specifically, whose meaning we think we’re describing. Many folks are interested in authorial intent — who, after all would be better to speak to the meaning of a work of art than its creator? — but I’m personally more interested in the idea that meaning is created by the audience upon consuming a work of art. There may be objective truths about an art, but there are only subjective reactions. Of course, that doesn’t make me immune to the allure of monolithic readings of certain artworks — Virginia Woolf’s work is somehow inherently feminist, or Ernest Hemmingway’s work is somehow inherently macho. We like these readings both because they’re logical (they certainly reflect the character of the author), but more importantly, because they yield meaningful insights. But what about readings that buck those stereotypes? What about interpretations that strain against those meta-narrative to reveal something more meaningful? I suppose notions of “more meaningful” illustrate my point about subjectivity, but I firmly believe that Captain Marvel 3 gains a great deal by being very unlike what we’ve come to expect of this series.

The issue opens with a fun little space fight, as Tic attacks the Guardians in Carol’s stolen ship. Carol, realizing that Tic isn’t after her, steps into the line of fire and brings poor Tic to tears. You see, Tic and her people resent Spartax for trying to move them off of the land that they’d been moved to after the Builders destroyed their home planet. Of course, Spartax says it’s just because people seem to be getting sick on the new planet — it’s all a bit messy. Anyway, they manage to clear up that Peter Quill is pretty far from the Spartax fold, and Tic and Carol seem to make amends as they continue their journey back to Tic’s planet — er, new planet. Anyway, Carol isn’t the most warmly received, and the President(?) explains that, if they were to leave, they would be abandoning their friends and family who have already fallen ill.

It’s not the most elegant explanation (seriously, why couldn’t they just move the sick people, too?), but it serves to give Carol a perspective that she didn’t have before arriving. She swings pretty effectively from “why don’t these silly people just do this simple little thing?” to “I can see why that thing is far from simple, and why these people are far from silly.” That kind of receptiveness has long been part of this series DNA, but with so much of the meta-discussion of this series tied up in feminism — from Kelly Sue DeConnick’s place in the comics landscape to the strength of Carol’s characterization to the welcoming home so many fans have found in this series — it’s actually refreshing that this perspective is focused on intergalactic diplomacy, rather than anyone’s gender.

That is to say, Captain Marvel can be rewarding to read as a feminist work, and many would consider it to be feminist in nature, but there’s so much more to it than that — in the same way that there’s more to Carol than her gender. The most obvious parallel this story draws to real life is the Israeli/Palestinian conflict, but there are also overtones of famous episodes with the Hmong in Laos, or even the American Indians. The point is, Carol has found herself in a situation that is much, much bigger than herself — imagine any one person attempting to broker peace in any of those conflicts. Carol is saddled with the work of entire state departments, in a conflict parallel to ones that have been going on for centuries without any resolution. To say she has her work cut out for her would be an understatement. 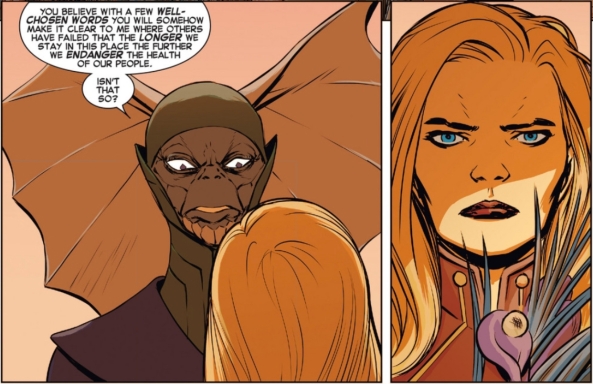 In a way, I think DeConnick may be commenting on the role she currently finds herself in. I wouldn’t presume to know what DeConnick’s artistic aspirations are, but it doesn’t seem out of the question that her role as one of the few female writers in comics is entirely coincidental to her job as a writer. That is, even if she just wanted to tell stories, she’s now looked to by fans and creators as a shining example of women in comics. I don’t want to denigrate the way DeConnick has wielded her celebrity — indeed, I think she continues to handle it with remarkable assuredness — but I do think it’s fair to say that representing all women, forever, is a very different skill than the writing DeConnick has spent years honing. It seems the position of sudden, surprise responsibility that Carol finds herself in has many intriguing parallels to DeConnick’s own situation.

But there I go, bringing up gender in an issue that I think does an admirable job of transcending such easy labels. Really, I don’t think this issue is so much about any labels as it is about understanding perspectives other than our own. Hopefully, that lends some level of protection to my reading of this issue, but I’ll leave it to Patrick to tear it to shreds. Patrick, I remember lamenting to you last summer that gender often dominates our reading of female-led series, but like I hinted above, my only loyalty here is to the most compelling interpretation. Was gender a key component for your reading, or did you find other rewarding threads to tug on here?

Patrick: I didn’t find gender too be a large part of my reading of this issue. In fact, to your point, the entire issue is played with a blind eye toward gender. Even the characters that have a habit of reminding us of the differences between men and women remaining focused on the task at hand (i.e., there are now sarcastic pet-names from Rocket, no pick-up lines from Quill). While I do find it intriguing that you can read a gender state in the absence of gender statements, the issue reads quite differently to me. I am, by no means, suggesting that Drew’s interpretation is wrong or stupid or myopic, but I think it does miss the anti-authoritarian thrust of this series.

Since Infinity, the Avengers have been part of this interstellar alliance that beat back the Builders. The threat was so big at the time that no one seemed to think twice about the consequences of consolidating all that power. It’s not surprising that the new mega-power born out of all these alliances is a lumbering bureaucracy, incapable of responding to any request in a timely or thoughtful manner. It’s not entirely clear how the Spartax have decided that Tic’s people need to evacuate their new-found home, but I’m guessing their support is more along the lines of some aggressive encouragement and less along the lines of comprehensive medical evacuation. Carol finds herself ambassador of an organization without even knowing the perspective of the organization, let alone how that perspective complicates the lives of those it effects.

Obviously, Carol’s punk rock enough to know when it’s time to stand up against the man and help the little guys. We end up seeing the character in a lot of costumes, and with a lot of different hairstyles, but I always have to wonder about the helmet. She doesn’t wear it much when she’s in atmosphere, so there may be some practical application for it, but the design choice is even clearer: giving her that badass mohawk.

(This is also the version of the character that appears on the cover of the issue.)

The hair might be a mild form of rebellion, but like, even today (and even living in Hollywood), I still see a mohawk as a bold, anti-authoritarian choice of hairstyle. This is also the part of the issue where Carol seems most in-control of whats happening, even as her own spaceship is hurtling towards her. Carol’s strength doesn’t come from being part of some galactic alliance, or the Avengers, or even the Guardians of the Galaxy, but from being an individual and making her own value-judgments.

As a point of comparison, look how she presents herself when she first gets to Torfa.

She’s all smiles and handshakes. Worse, she leads with position within these organizations that are failing the people on this planet. The president may do all of the talking, but Carol doesn’t need to be convinced that the people of this planet need to be helped more than they need to be relocated: she needs to discover it. She’s only able to make that discovery after the corporate speak fades out of her vernacular.