Patrick: I saw The Expendables when it came out in theatres in 2010. I ended up really enjoying the experience, if only because the flick ends up being a comedy of unintended juxtaposition. Stalone and company think they’re making an uber action movie, but the truth is that Jason Statham movie is not the same genre as a Jet Li movie is not the same genre as Sylvester Stalone movie. It’s a mess that so blindly and courageously moves from one “here’s what’s cool about this guy” scene to the next, with no regard for its own identity. There are also a lot of genres buried in Teenage Mutant Ninja Turtles, and while issue 41 has a lot of work to do to step up how all of these pieces will come crashing into each other, the creative team leverages the hilarity of the same kind of juxtaposition The Expendables does. Only, y’know, on purpose.

Also (perhaps taking another cue from The Expendables franchise), this cast is starting to balloon to a positively overwhelming size. This issue manages to keep tabs on just about everyone except Alopex and Angel. That means spending just a little bit more time with Casey and April than usual, but still finding the space to explore the varying levels of trust, deception and loyalty in both Shredder and Krang’s organizations. And while it looks like the Turtles and their allies are pretty much on the same page, there are still lingering questions of what constitutes family, and why that should imply greater loyalty.

Donatello is sort of the linchpin for all of this. It’s his absence that causes Old Hob to doubt the commitment of the Turtle family; Shredder is anticipating Donatello’s eventual turn against him (and questions his methods of hiding behind Metalhead); and Donatello is also Fugitoid’s connection to a world outside of Krang’s organization. He’s got his hands in everything, but is showing the least attention to the group we would assume he is most loyal to. And yet, he’s doing it all in the name of protecting his brothers and — by extension — everyone on earth.

Lest you think multiple levels of deception and the end of the world are too grim topics for the Ninja Turtles to tackle, writers Tom Waltz, Bobby Curnow, and Kevin Eastman, along with artist Cory Smith, are quick to highlight the absurdity in the story they’re presenting. I can tell I’ve been reading comics too long, because the hilarity of the following totally escaped me at first: a robot, controlled remotely by a mutant turtle, negotiates with an ancient ninja master in his traditional zen garden. The team rapidly ratchets up the nonsense by making Metalhead transform into dune buggy mode right in the middle of a quintessentially melodramatic Shedder-ism. 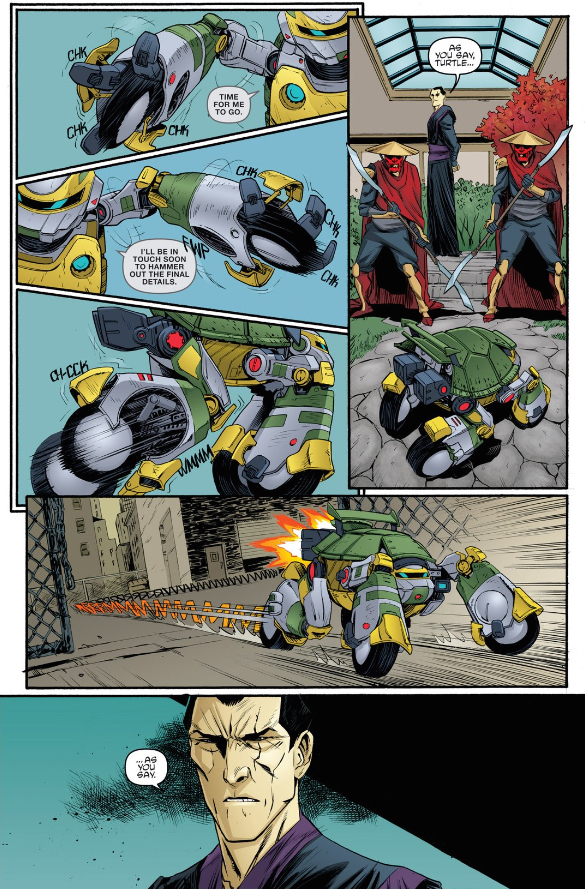 Like, what the hell? That’s so goofy! I love that Smith is committed to presenting it as straight-faced as possible, even zooming in on the details of Metalhead’s transformation. It’s a hilariously rad moment sandwiched between the gravity of Shredder’s “as you say…”. I don’t even think it’s intended to take the piss out of Shredder’s serious moment, it’s simply acknowledging the awesomely mis-matched tones that have to run side-by-side in this series. Here’s another example: in this one, it’s all Shredder being amazing.

Again, let’s mash-up Shredder’s supervillain costume with Oroku Saki’s taste for a traditional Japanese tea service. It’s not a profound moment or anything — it’s not even all that funny — but this just illustrates the series’ commitment to what’s fun about its universe.

Which actually brings be back around to The Expendables. Sometimes I feel like those movies only exist to justify a poster with all those actors on it, standing in a line, looking badass. The ads are arguably more exciting than the movies themselves, they’re such effective tools of hype. TMNT 41 has so many different teams to hype, and while I love Shredder’s Mutant Role Call, I gotta give the Best Hype award to this panel.

Taylor, how well is this hype working on you? Also, last time we talked about Cory Smith’s art, in was in the context of that boat-bound issue a few weeks back, but here he’s continuing to run Santolouco’s torch a little bit further. I can’t wait for the confrontation to begin in earnest so we can see just how close his chops really are.

Taylor: I would like to think that Santolouco and Smith have a feud going that’s similar to the feud between Mozart and Salieri. Each artist is so talented, it’s fun to consider the idea that they are trying to one-up each other with each TMNT issue they pen. It’s funny to think of a story about mutants and alien brains acting as muse to great artists, but I guess that’s what it’s like to live in the 21st century.

Speaking of alien-brains, I simply love the way that Smith renders Krang. Santolouco’s take of the would-be destroyer of Earth makes him seem almost somewhat cute. By no means do I mean that as a bad thing, but generally when we think of something destroying Earth we tend to think of something a little more fearsome. Smith’s rendering of Krang, however, makes the little guy seem downright diabolical.

While Krang’s general design has stayed the same, Smith has altered a few details to make the character seem more dangerous and evil. His eyes look like the soulless black eyes of great white shark that sees nothing but prey. His teeth are jagged and look razor sharp. Even the ridges on his head are more pronounced, making the soft-squishy guy look demonic. All this makes Krang look like a mischievous cat waiting to pounce on you when you least expect it. While cute, it can hurt an awful lot. Just so with Krang. While he might be a little brain, the way he is portrayed here makes his plan to make Earth a New Utrominon not only seem real, but dangerous.

Ultimately this helps to makes this issue just a ton of fun. Going off of the absurdity you mentioned Patrick, there’s no reason we should actually fear a talking brain. To its core, it’s just such a silly and bizarre idea. The thought of finding Krang terrifying is a stretch and lucky for us, Eastman and Waltz realize this. All of what Krang does and is, is written with a certain tongue-in-cheek attitude. He’s over-dramatic and reminds me of villains from James Bond movies. He’s evil just for evil’s sake. Just look at this last frame of him. 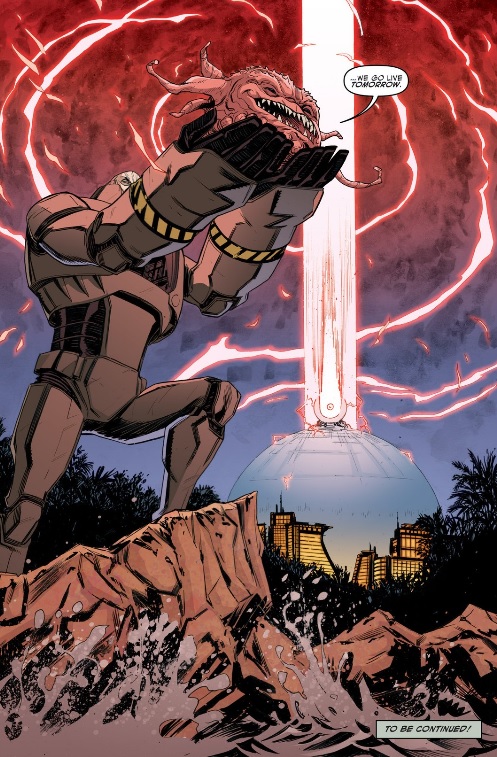 It’s all so over the top. It borders on soviet propaganda and nails home the point that Krang is more a villain based in Vaudeville than actual evil. By his very nature, we can’t take Krang seriously and that’s just fine! Sure, he may look like a mean little sucker, but just like a housecat, he’s not all that dangerous — at least to the reader.

When we compare the caricature that Krang is to the stoic Shredder, it becomes all the more clear that Eastman and Waltz have a long-term pattern they are intending to follow with this current TMNT series. Going way back, the first arc of this series was gritty, real, and intense. These attributes were due in no small part to the seriousness with which the ideas of family, revenge, and honor were explored through the battle between the Foot and the turtles. After that arc finished, we went on a bubble-gum adventure to another dimension where among other things the turtles saved a group of aliens named neutrinos. This arc is many things, but grave is not one of them. The City-Fall arc, like the first, was gritty and tough and this is due in no small part to the presence of Shredder as villain. In the current arc, Krang is the main baddy again and things are becoming goofy. While it would be a mistake to flatly say that Shredder represents the serious side of the Turtles story and Krang the silly, it does appear that their respective arcs as villains coincide with the tone of the story.

Basically that’s all just a long way of saying this series knows how to vacillate between having fun and being thoughtful. I think that’s a rare thing for a comic to have and once again I’m impressed by the flexibility of this creative team. Whatever happens next month, whether it’s funny or serious, I know I’m bound to enjoy it.