Drew: There’s nothing like a good plot twist. I may hem and haw over whether I prefer that a plot be surprising or relatable, but there’s nothing quite as exciting as having the rug yanked out from under us. Still, I find that twists work best when, to paraphrase fellow contributor Greg Smith, they’re both an interesting plot devices and an organic extension of the story. That is to say, while the ending of The Sixth Sense may feel like just a clever, Twilight-Zone-y twist, it actually provides a very logical end-point to Cole’s newfound mission in helping ghosts come to term with their deaths. It’s not yet clear if all of the twists in She-Hulk 11 (and there are many) are quite as character-driven, but writer Charles Soule cleverly packs them into this penultimate issue, leaving plenty of space for more meaningful conclusions next month.

Actually, because we’re so close to the end, it’s kind of difficult to evaluate this issue on its own merits — there is a TON of set-up here, but not much pay-off. I mean, sure, we learn that Nightwatch is apparently behind the mysterious blue file, but since he hasn’t been featured in the series previously — and I’m pretty sure he’s supposed to be dead, anyway — that’s not so much an answer as it is a bigger question. Let me be clear: that’s not a criticism of this issue. Indeed, the way this story poses so many questions is probably its greatest strength, but it also makes it difficult to say much about — at least in terms of plotting.

I can say a bit more about the art, but its a decidedly mixed bag. Artist Javier Pulido has some decidedly brilliant moments, giving us clever, almost schematic layouts, giving his action an electric sense of motion — both across rooms and across state lines. 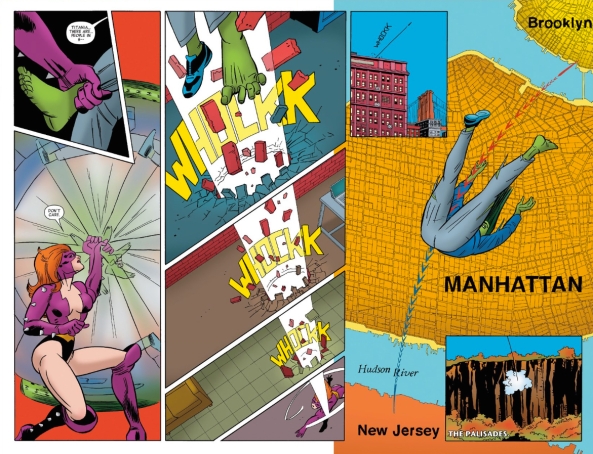 Everything works about this sequence, but I’m particularly enamored of that middle column, where Pulido uses the floors of the building as natural panels, lending that moment a fun sense of motion no matter what direction you read it in. Pulido actually uses that same technique on the previous spread, but it doesn’t lose any punch the second time around (though I think changing the orientation of the throw goes a long way to making it feel different).

Unfortunately, not every sequence is quite so clear. Pulido has a habit of occasionally framing his subjects just a little to closely, often at the cost of clarity. It’s not something he does often in this issue, but when it does happen, it completely pulls me out of the action. Take Volcana’s surprise arrival, for example.

My trouble is the “szzzzzaaxxx” panel. In hindsight, I understand that Volcana, off-panel to our right, is blasting She-Hulk, who we see just on the left edge of the panel, but I don’t think the panel actually communicates that at all. Obviously, the energy blast is supposed to be a surprise, but because we don’t see who its coming from or really who is hit by it, it doesn’t even quite read as an energy blast. Moreover, because we don’t get a panel establishing this particular perspective of Titania before the blast, it’s not entirely clear that our perspective is from behind Jen — I thought this shot was from her perspective, with the figure on the left blasting something across the panel in between Jen an Titania. The confusion is only momentary — the panels that follow clear things up rather quickly — but it was enough to disrupt what was otherwise a propulsive scene.

Maybe it would be too much to say that that panel exemplifies the issue — emphasizing the “wait” of the “wait, what?” surprise — but that confusion is definitely echoed elsewhere in the issue. I suppose it’s only frustrating because of how clear things are elsewhere — so much of this fight scene is fantastic — but it leaves this issue just short of great. Like that panel, I think a lot of what’s confusing here will be cleared up next month (I’m now more intrigued about Angie and Hei Hei than ever before), which I’m totally on board for, but in the mean time, I think a lot of these twists were robbed of their impact because we simply lost touch with what to expect. I mean, once you add a giant winged monkey to the mix, the “but I thought he was dead!” twist kind of loses its meaning.

Suzanne, what did you think of all of the twists? Did they hit a point of diminishing returns, or were they all exciting for you. Oh, and does Hei Hei’s transformation into a flying monkey mean that Angie is the Wicked Witch of the West?

Suzanne: Drew, Nightwatch did make a brief cameo in She-Hulk 6 to discuss the blue file with Jen. Looking back, his appearance of just a few pages felt forgettable when you contrast him with the likes of Steve Rogers and Hank Pym. This could also be my DC Comics bias talking here — I’m less familiar with minor characters in the Marvel Universe and am more likely to say, “Who’s that?” than “I haven’t seen him since 1994.” The nostalgia factor is gone, so a writer has to lay a firm foundation for me to feel invested in a new or unknown character. Unfortunately, the big reveal didn’t have the emotional impact I expected. Charles Soule has one more issue to convince me I should care about Dr. Kevin Trench and his role in this series. Otherwise, I’ll blame him for falling back on the butler did it trope.

What did resonate with me in this issue? Angie and Hei Hei. They are the quirky, unsung heroes of this book. First of all, how often do readers get to see female characters who don’t fit the idealized body type? Angie Huang doesn’t fit into traditional stereotypes and roles either; typically, characters who are considered “larger” are portrayed either as lazy or as the comic relief. She has intellectual agency as well as physical power. In the span of two panels, Angie takes down Volcana (without the help of her badass winged monkey). I would challenge Marvel to increase the representation of minority females with a range of body types–and not just as supporting characters. I’ll step off my soap box now.

A few issues ago, Angie was attacked in North Dakota and dragged herself through the snow in order to help Jen investigate the blue file. She goes a step further this time and tells Jen about the case despite her wishes. She does this (and is willing to get fired) in order to help her friend. Javier Pulido excels at portraying the gravitas of the moment between Jen and Angie. I’ve criticized Pulido’s flat facial expressions in the past, but I’ll make an exception for Angie’s pained reactions. And what about that winged monkey? We had hints that he was special from She-Hulk 6 when he breathes into Angie’s mouth to revive her. I’m going with either spirit animal or Inhuman. The last issue of this series has high expectations, not the least of which is the consequences of Angie’s news. 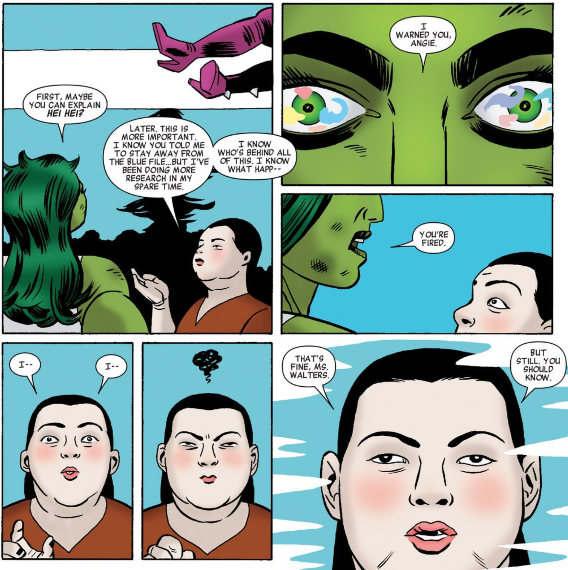