Taylor: If you’ve ridden public transportation with any regularity, you are aware that there are some people who clearly don’t follow the unstated rules of the bus or train. Don’t bring cooked food into the vehicle; don’t have loud conversations; don’t listen to music loudly or without headphones; and always do your best to make room for others. Those who fail to follow the rules must suffer the passive aggressive wrath of those around them, yet remarkably, few seem to care. These individuals are either entirely brazen (a definite possibility) or perhaps they just lack a self-awareness that informs them that their actions are burden on others. In Ant-Man 5, we see if Scott Lang is one of these individuals and the result is an issue with unexpected emotional depth.

Ant-Man is in the battle of his life with the reanimated and purple Augustine Cross. Augustine’s new lease on life is thanks to the stealing of Cassie Lang’s heart. After a quick tussle, Ant-Man prevails and is able to venture into his daughter’s body to save her life by preventing it from rejecting a new heart she has implanted into her chest. After this close call, Scott ponder’s if perhaps his presence in his daughter’s life is putting her in danger.

There are two things that stand out to me about Nick Spencer’s writing. First, he’s a very clever and funny writer and, second, he writes asshole characters really well. These two things are what set his writing apart here (and in The Superior Foes of Spider-Man) and it often makes for an entertaining read. With the case of Superior Foes, I found that after several issues, I began to find Boomerang’s bad behavior aggravating. It seemed like the guy was never getting better or getting worse. He had become somewhat static, something the protagonist of story should never be.

I had begun to worry that perhaps this same shortcoming would plague Ant-Man as well, but issue 5 proved me wrong. In this chapter, we see that Scott isn’t  just a one-dimensional character — he’s a character of depth and complexity.

The catalyst for this change in Scott’s behavior is, of course, his daughter, who essentially acts as Scott’s moral compass. After Augustine retreats with his sun, Darrio, Cassie is left dying on the operating table because she needs a heart. Luckily, Dr. Sondheim was able to supply her with one. Because heart transplants are “complicated,” Cassie’s white blood cells began to reject it. Scott then Shrinks himself down to the size of a cell and begins to take out the white blood cells with his blaster so Cassie can live.

As he’s doing this, Scott as an epiphany of sorts. 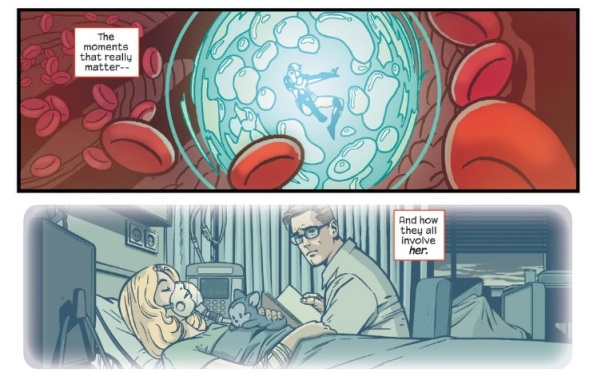 He realizes that all of the most important moments of his life revolve around his daughter. Not around becoming Ant-Man, not defeating Augustine the first time, and not showing up Tony Stark. It’s just the simple moments with his daughter that really mean the most to him. This development in Scott’s character shows us that he’s a flawed man. He has good intentions and his priorities seem to lie in the right places, he just fucks everything up in his own special way. This is typical of Nick Spencer hero, but what stands out to me here is that Scott isn’t motivated by selfish means. He’s motivated by love.

Of course, in Superior Foes, Boomerang has his motivations and even his regrets about being such a jerk all of the time. The thing is, though, he never really does anything about it. Scott, on the other hand, not only identifies his shortcomings, but acts on them. After Cassie is safe and even after his wife finally accepts him being in Miami and close to his daughter, Scott realizes that he’s the one who precipitated all of the danger for his daughter anyway. Given that, he comes to the a conclusion that he’s the problem.

And with this he decides to leave Cassie so she’ll be safe. It’s a heartbreaking realization and given Scott’s track record, we would expect him to rationalize the blame away somehow. But the growth he’s shown in this issue causes him to hold himself accountable. This is perhaps the most admirable thing Scott has done in the series to date, and it might be the only he’s done that isn’t motivated by personal gain. All of this is to say, Scott has learned the art of self-awareness. He now seems to understand how his actions impact others and how he fits into their world.

Patrick, I was really surprised by this issue. I wasn’t expecting this sort of depth but here we are. Sure, all of this could come tumbling down in the next issue and yes, it’s not shocking character turn, but I didn’t think this series had this sort of emotional depth in it. What’s your take on the issue? Do you buy Scott’s new self-awareness as genuine or just a knee-jerk reaction? Also, what’s up with Augustine’s daddy issues?

Patrick: I think there’s a pretty clear line from Augstine’s daddy issues to Scott’s daughter issues. The relationship between father and child is a weird one, fraught with all kinds of cultural baggage and expectations. Augstine helps his father come back from death, and then only asks for a hug (and for his father to say that he’s proud of him). Darren Cross is so far entrenched in supervillainy that he’ll never be able to have a relationship with his son that doesn’t boil him down to an instrument of comic book resurrection. That’s not a real relationship. You could argue that Scott’s relationship to Cassie prior to this series was plagued with a similar symptom: for all intents and purposes, Cassie Lang was fridged. That made Scott Lang, the Ant-Man, the hero-with-a-dead-kid. And that’s plenty sad and effective and blah, blah, blah, but it renders the character of Cassie little more than a motivating force. There’s still an aspect of that here — you have to wonder just how much a daughter stands to gain from losing her father — but at least the character, and her relationship with her father, is still a living thing, “vital” in every sense of the word.

All of which is to say that I was a total sucker for this issue, with its sadder, sweeter beats hitting me square in the heart. I do think it’s remarkable that, even among all that hard-won catharsis, Spencer manages to still play conflict for laughs. Artist Ramon Rosanas helps establish that characteristically goofy tone early on — the first page is a hilariously underwhelming splash page of a foot.

What a patient page! That’s like the least dramatic image you can show while building dramatic tension. It also helps that Spencer’s winding up for a joke. It’s a joke that also happens to reveal that our hero wasn’t unceremoniously murdered in the previous issue, but a joke nonetheless.

There’s a scene later in the issue where Cross bursts through an exterior wall, several stories above the city streets with Ant-Man in-tow. The Pym-powered solution is simple: shrink down and ride Cross’ body to the ground. Rosanas’ execution of this idea, however, is elegant and playful as hell. 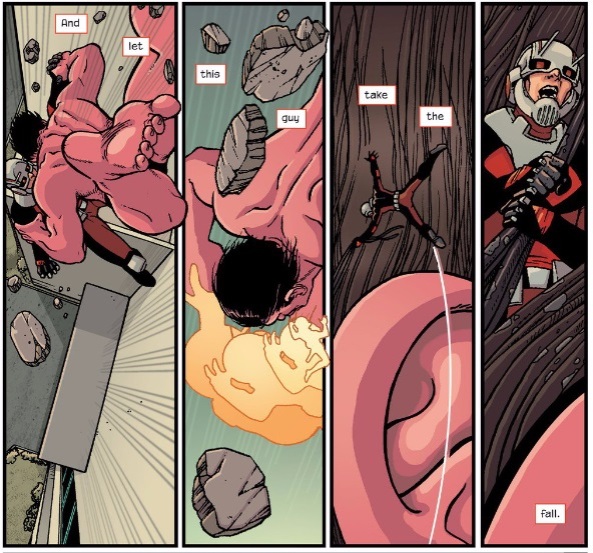 These four panels are so good. Check out how Cross’ relative position in these panels is further down the page in each one. I also love how Cross’ body (that foot again!) transcends the border of that first panel — that’s when he’s still the one in charge of this action. That changes in the second panel: this time, it’s Scott’s shrinking body that violates the sanctity of the panel divider. Scott’s shrinking also force the change in perspective as the camera pulls in tighter, scaling to him. The last, perfect, detail is that each one of these caption boxes hovers around the top of the row, except, of course, the word “fall.”

Spencer is actually particularly playful at this point in the issue. That’s when we get the cut back to Machine Man and Grizzly shirking their duties (complete with superfluous Bradly Cooper joke). Spencer follows it up with one of those delightfully self-aware jokes about how impotent of a power it is to command an army of ants. Cross just shakes ’em off, a little angry, but none the worse for wear. That cynicism is almost refreshing when the trend is toward making all the cheesier superpowers extra effective (consider how even a book as silly as The Unbeatable Squirrel Girl treats Doreen’s ability to speak to squirrels).

It’s important that Spencer and Rosanas not rush to that emotionally resonant conclusion: the hallmark of the series is jokiness tinged with sentiment. Scott makes my favorite joke while traversing his daughter’s cardiovascular system, fighting like hell to make her body safe for her heart transplant. The steaks are as high and as personal as they can get, and Scott can still make a Battletoads joke.

Level three — the infamous speeder bike level — isn’t so tough. I learned to beat it as a child, and again when I was in college. (I played a lot of Battletoads in college: my buddy Al and I had set the goal of beating it co-op. Turns out that feat is literally impossible due to a glitch in level eleven. You wanna talk about challenges? Suction-cup unicycle is a motherfucker.)