Ryan: Though the Avengers have yet to assemble, the five of them that are featured in this issue have a shared problem. They have internal issues with how they are perceived by the outside world. Captain America is not happy to have his behavior scrutinized for racial implications, Iron Man is still seen as a titan of industry even though his wallet is literally empty and Spider-Man, well, to borrow a phrase, he can’t get no respect. In the second story of the issue, Ms. Marvel struggles with her ability to prove herself to a fellow hero and Nova can’t make headway with a pretty girl. These guys will soon have to work together to save the world from war-mongering aliens, but they each have something else to prove to others.

Mark Waid opens the issue with Captain America saving a car full of people from falling to their deaths with his heroics that Adam Kubert shows in a series of vertical panels that emphasize both the danger and the Cap’s swift flight. Soon the attention shifts to a bit of gotcha citizen journalism. Two Girl Scouts vie for Captain America’s single five dollar bill, and the crowd records the moment. The racial element is introduced in stages. First, the girls speak from off-panel, then we see their faces as part of the crowd shot. Then we get the snarky commentary from the crowd. The conflict is heightened by showing each girl holding a box cookies with smiling pride. The panels have the misty background of a school photo. Then a panel of phones, held up, ready to create a viral moment out of nothing. This trio of panels both simplifies and crystallizes the issue. Cap then employs a classic strategy for those in a no-win scenario; he shifts the focus. In another nod to the theme of public perception, he points out Stark’s need to put aside his dislike of children for the photo opp.

Cap knows that this kind of scrutiny is part of his new identity and admits as much to Stark, but it’s clearly weighing heavily on him. He and Stark discuss the lack of an Avengers team, not knowing that the world will need one that very day.

The Chitauri Villian introduced in the issue has a fairly generic warring alien vibe. He is grumpy and sees humans as insignificant. As much as I was ready to write him off as typical, especially given his trite final line, the efficiency of his disposal of three heroes with one blast created an image that is quite striking.

In the second part of the issue, we go back a month and a half before Warbringer stands over the unconscious heroes to see Ms. Marvel and Nova’s first encounter. I was sort of hoping for a meet-cute, but these two are so filled with insecurities and self-consciousness, that it is decidedly not cute. Nova and Ms. Marvel are both so concerned with how they are perceived that they can’t forge an honest connection.

Waid offers us a clearer vision of the subtext by giving us running interior monologue for both Nova and Ms. Marvel. All of  their feelings are made text. It made for an uncomfortable read, given that you can see exactly where the characters are moving at cross purposes, unintentionally offending and hurting each other. It’s like watching a car full of people careen off a bridge without Captain America’s wings. Or, in the real world, it’s like having two friends confide in your their version of an argument. Each side’s anger and frustration is justified, but neither can see the entire picture. We know that Kamala’s reaction to Sam revealing his face is all about her own fears and insecurity, but what he sees is her rejection of his vulnerability.

Mahmud Asrar’s art reinforces this feeling. As Kamala’s mind races, we see her stricken face in the forefront with a swirl of red and black behind her. When she responds verbally, all of that color is gone, replaced with an unfeeling white. Her face is also more shadowed and without affect. She seems indifferent, even though the previous panel shows she is anything but.

I can sometimes be a bit shameless in my desire to want characters to find a connection, especially angsty teenage ones, but I hope that these two can get past their own insecurities and end up friends.
Taylor, I know I focused on the internal conflicts with these characters, but how do you think the more external conflicts are shaping up? What do you think of Warbringer as a villain? Also, am I just wearing my shipper goggles with Nova and Ms. Marvel?

Taylor: From what I’ve read of Warbringer in this issue I’m both excited and bored by him at the same time. On the one hand, he’s a typical evil alien who wants to destroy. You know, your typical Avengers villain. His design doesn’t help out his cause either. Like many would-be destroyers of planet Earth, Warbringer is huge, ugly, and generally purple in color. I’m not sure why that’s become the accepted form for evil aliens but it has, so I’m not super thrilled to see the motif repeated here yet again.

However, where Warbringer fails to impress in originality, he more than makes up for with his general grumpiness and bombastic persona. While this again is an old trope for giant, purple men, the way it plays off of Wade’s tone in the issue is fascinating. Warbringer is self-serious and an old-school villain to a fault. This disposition doesn’t exactly jive with the man he first meets on Earth, Dario Agger.

No man to mince words, Warbringer attempts to leave Dario in the dust and get busy bustin’ Earth. Problem is, Dario has the upper hand and he also loves to talk. Seeing Warbringer, a giant of a man/alien, essentially helpless before a suit is comic gold. His desire to smash is overridden by Dario’s desire to scheme and it’s great to see Dario play Warbringer like a fiddle. The dynamic between these two characters rivals any relationship I witnessed in the issue among the Avengers and I only hope more scenes like this pepper later issues. That being said, Warbrginger in isolation would be a bore, but throw in Agger and things suddenly become much more interesting.

While this first chapter of the issue hold promise, I found the second to be the chapter that I really enjoyed. I’ll come out and say it — I love every story Kamala Khan stars in. That being said, maybe I’m a bit of a homer when it comes to stories for her, but I think that stems from her just being one of the most damn likable people in comics. That means I don’t blame you for wearing shipper goggles when you see her and Nova, Ryan. We want Kamala to be happy and if that means she has a love interest in another super hero her age I’m all for it.

I thoroughly enjoyed seeing Kamala and Nova play off of each other’s insecurities (such an accurate representation of courtship!) but I was equally impressed with the artwork of Adam Kubert. Notably, I appreciate how he understands that most readers of this issue probably have some idea of who Ms. Marvel and what her powers are. When giant monsters from a micro-dimension attack Jersey City, Kamala leaps into action and embiggens herself to take on the creatures. 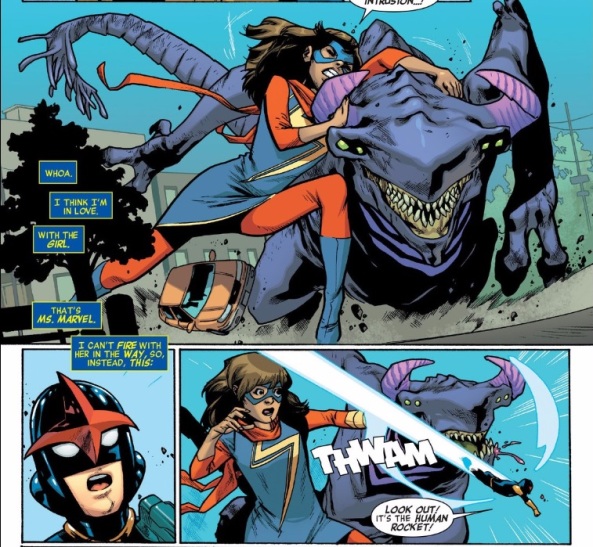 Last I saw Kamala she had just changed into her super suit and was normal size. On first glance it’s easy to think she’s still that size in the panel above where she has the purple monster in a headlock. However, I know she’s huge because Kubert includes some nice reference points here such as the car and the tree which indicate her size. This size change is also reinforced two panels later when Nova smashes into the monsters mouth with his fists. The effect of this is that I get a the impression Kamala emgiggened herself in the alley she changed costumes in and suddenly appeared out of nowhere, to the surprise of all. I love it when an artist implies such a large amount of action off-page but does so in a way that doesn’t interrupt the flow of the story. This is solid visual story telling and added to my enjoyment of this issue.

However these Avengers are perceived by others, I know that I’m at least entertained.