Michael: Superheroes do so love wallowing in self-doubt and self-reflection. Along with trading blows with supervillains and helping the helpless, self-reflection is one of the great pastimes of the American superhero. “Am I strong enough?” “Am I supposed to be this?” “Can I overcome this?” and so on, and so on. In Moon Knight 1 our hero is questioning himself (or selves) on a completely different level. The main question our hero asks is “Have I ever actually been Moon Knight? Or did I make that up?”

While experiencing a profound dream of near self-discovery, Marc Spector is jolted awake. Grogginess subsides and he realizes that he is a patient in a mental institution. With the help of some old friends, shock therapy and getting the crap beaten out of him twice, Marc remembers that he is Moon Knight — “The fist of Khonshu.” His therapist, Doctor Emmet, pleads that Marc give up his delusion — that Moon Knight exists but he has never been Moon Knight. Marc plays the good patient until he and the Khonshu voice in his head plan an escape with a makeshift Moon Knight cape and cowl made from his bed sheets. Marc reaches the rooftop of the institution where he sees things “as they are”: New York city being overtaken by the world of the Egyptian God Seth. Marc is recaptured and unmasked, and the “real world” disappears from his sight.

I have never been all that familiar with Moon Knight — other than that he was a superhero who was a little mental unhinged. I did a little homework on the characters and situations referenced, so I’d say I have a decent handle of Moon Knight 1. I’ve experienced stories likes this before (Buffy the Vampire Slayer and Batman: The Animated Series come to mind); where the hero is being convinced that he/she has never been a hero but is merely delusional. It typically functions with the same rules and dynamics of a “dream story” — there are always hints or sign posts that point to the real world outside of the dream.

To be clear: I don’t think that Marc is dreaming this all up, but it’s a movie based on the manuscript of his mind. And in this movie the cast of characters is the key to realizing that this is not the real world. In the “rec room” Marc reconnects with an old friend in Bertrand Crawley — Moon Knight’s informant — and an old lover: Marlene Alraune. Initially I was wondering if the nurses who enjoy beating the shit out of Marc were involved in concealing the truth from Marc; but their fear of getting caught by Dr. Emmet tells me that they’re not in on it and are just assholes. Dr. Emmet however is public enemy number one. Under the guise of the caring mental health practitioner, Emmet is actively trying to suppress Marc’s Moon Knight identity. Within the “dream story mechanics” vein, its no coincidence that the news broadcast that mentions the exploits of Moon Knight also mentions his enemy Stained Glass Scarlet. Scarlet has an inexplicable psychic link with Moon Knight (thanks Wikipedia!); ipso facto, Dr. Emmet is Stained Glass Scarlet.

With his dissociative identity disorder, Moon Knight has always been a character that I’ve been interested in reading — and this was a good reintroduction for me. Unlike many comic books, Moon Knight 1 delivers on a promise of its cover. The cover has no hard lines or definitions but instead is ruled by the negative white space. That’s a theme that Greg Smallwood and Jordie Belaire continue throughout the entirety of Moon Knight 1. While Marc goes through a handful of fist fights in the issue, the major struggle is between a couple of aspects of his mind: accepting or denying that he is Moon Knight and that he can overcome. For me, the endless white negative space is indicative of Marc’s head space as Moon Knight. I’m not saying that “it’s all in his head” (though it could be) but that it’s all from his perspective. There are several instances in the issue where Marc has a revelation or shock to his memory, resulting in in panels shifting to the side of the page as if they’ve literally been pushed there. 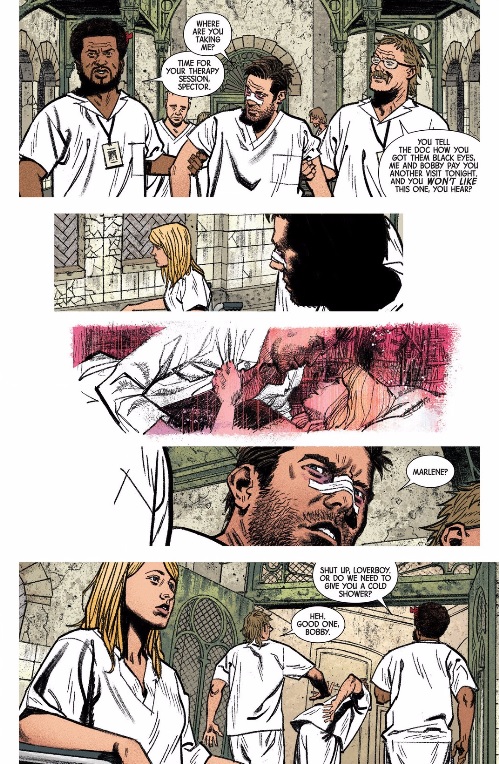 There’s a lot to say about the art of this book, so kudos to Smallwood and Bellaire. However, Moon Knight 1 reminds me how much of a visual director a writer can be as well. Jeff Lemire is a talented writer, especially when paired with artist Andrea Sorrentino on books like Old Man Logan and Green Arrow. There’s a very unique visual style to the action of those two books that I used to attribute to Sorrentino but now believe that might be the design of Lemire. In those aforementioned books as well as Moon Knight 1 the action scenes highlight all of the blows the combatants land in their own individual panels. This wins me over every time, I love it — it’s like the fight transitions into slow motion and you can appreciate all of the fluid moments that help the victor win the battle.

Drew! How fare thee? Where does Moon Knight 1 stand amongst other Moon Knight tales you have read so far? Do you have any Inception-y theories of “what is real” and whatnot? Did you notice any gigantic exclamation points in the book? I didn’t get the chance to cover them/don’t know if I only imagined them and must now be placed in a mental institution. One more last stray thought: the news reporter in the broadcast reminds me of the ’80s future newscaster of The Dark Knight Returns.

Drew: Hey, nice catch! Yeah, her earrings, one rotated 90 degrees compared to the other, definitely evoke The Dark Knight Returns. I’m not sure if the allusion goes much deeper than a shout-out, but it’s certainly something to pay attention to as the series develops.

My only familiarity with Moon Knight comes from the stellar opening run of the previous volume, and while there are obviously important differences in those six issues and this one, there’s one HUGE similarity: the color work of Jordie Bellaire. For instance, I didn’t do quite the research legwork Michael did to learn about Stained Glass Scarlet’s psychic connection to Moon Knight, but I came to the exact same conclusion about Dr. Emmet, all because of Bellaire’s colors.

Bellaire’s use of red throughout the issue is so controlled, its all but impossible not to connect Dr. Emmet with the only other figure we’ve seen in read up to that point: Stained Glass Scarlet. Intriguingly, red comes to permeate key moments of the issue, demonstrating Scarlet’s control over Marc even when she isn’t physically present. The pen that Marc steals (an act cleverly hidden in plain sight in the excerpt above) is red, the shoes and afro pick of Bobby (one of the nurses who abuses Marc) is red, as is the lighting of the sky when Seth’s takeover disappears. Perhaps most importantly, Bellaire uses red to wash specific moments of violence against Marc — moments that Smallwood emphasizes further with those circular panels like those in Michael’s last excerpt.

But I can’t talk about Bellaire’s work on this series without addressing the approach to Marc’s white clothing. I spent a LOT of time talking about how Moon Knight’s pure white clothing allowed us to project whatever we wanted onto him, making him one with the white gutter between each panel. Here, that effect is even more explicit, as Smallwood does away with panel borders entirely. With no physical barrier between him, Marc becomes indistinguishable from the gutters, making it difficult to tell where the facts stop and our imaginations begin — a perfect reflection of the situation Marc finds himself in. Curiously, the white outfits of the nurses is treated in the same way, suggesting that they may be every bit as fictional as the delusion Marc finds himself in.

Which I suppose brings me to my own pet theory about what’s really going on. To me, the guard’s fear of getting caught doesn’t necessarily represent their independence from Scarlet’s fantasy. Instead, it could be an attempt to give that fantasy some verisimilitude, to force Marc to draw the same conclusions that Michael did: that this must not all be a fantasy. To me, the white outfits and red accents on those characters suggest that they have been created not only by Scarlet and Moon Knight, but by our own imaginations, as well.

To me, the symbolism of the colors is a bit more interesting than those two exclamation mark pages, which emphasize one literal and one figurative shock, respectively. Or maybe I’m just put off by that pun, which I suppose I have to admit might be my own construction. At any rate, there’s more than enough richness in the symbolism here to excuse a few duds. Color me intrigued! (Ugh. Now I can’t stop making terrible puns.)