Spencer: Partnerships are successful when two people compliment each other, when both parties have something to offer that the other needs. Jeff Loveness and Ramón Pérez’s run on Nova is absolutely a book about partners, and issue 3 further defines their relationship, showing that they’re good for each other both on and off the battlefield.

Throwing the two Novas into battle together for the first time (against a trio of bounty hunters: a Chitauri, Titus the Tiger, and a [possibly Canadian] cyborg) reveals a different dynamic between Sam and Rich. Despite being younger, Sam had a leg up over Rich in the two preceding issues — Sam’s family gave Rich a connection he desperately needed, and Sam was able to fill him in on everything he’d missed while he was dead. In some ways, Sam still has an advantage even in battle — he’s more familiar with these particular combatants than Rich is, and his Black Nova helmet is explicitly stated to make him faster and stronger than Rich. Yet, Rich fares better in the fight than Sam does, and the primary reason why comes down to the differences in their levels of maturity and experience. Just look how Sam reacts when Titus insults his father. 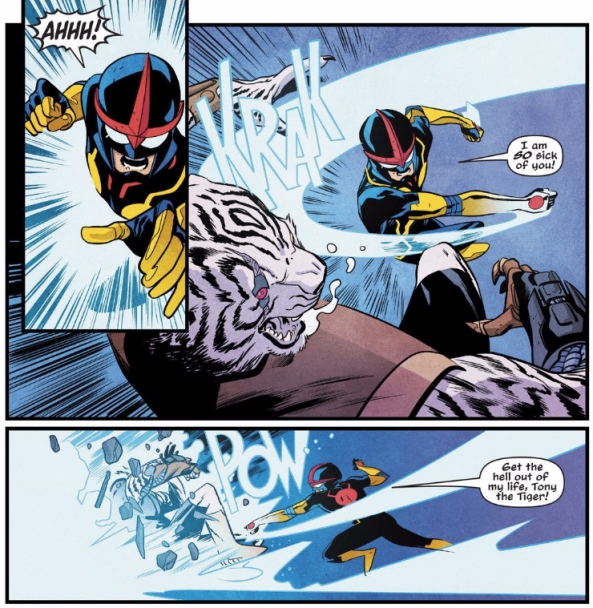 He goes from 0 to 60 in an instant, completely losing it (this attack ends up being ineffectual, probably because Sam isn’t thinking clearly). Sam’s immaturity and inexperience is a liability in this issue, while Rich’s years of experience gives him an advantage; Rich fares far better in battle simply because he’s been a Nova longer (as last month’s issue pointed out multiple times, Rich was an exceptional Nova, and it’s earned him quite a reputation across the galaxy). Not only is he more skilled in hand-to-hand combat, but he has more situational awareness — it’s Rich who comes up with the idea to use Cosmo’s telepathy to communicate behind the bounty hunters’ backs, and it’s Rich who figures out how to find the cyborg’s bomb.

Rich also proves himself a worthy partner outside of battle. Maybe he’s still struggling to put his life back together, and maybe he never had the most balanced life in the first place, but Rich’s experiences give him the perfect perspective to help Sam through his own personal dilemmas.

When we discussed Nova 1 I mentioned that part of why Sam loves being Nova so much is simply because he’s much better at being Nova than he is at being Sam, and I get the feeling that Rich may feel the same way. But Rich has also learned that burying yourself in work instead of taking risks isn’t a satisfying way to live your life, and he’s able to impart that lesson to Sam.

This is a very Rich-centric issue, but Loveness and Pérez give Sam time to shine as well. When Rich nearly loses himself to the Cancerverse while containing the detonation that threatens to annihilate Knowhere, it’s a few words and a pat on the shoulder from Sam that brings him back to his senses; in fact, Rich first taps into the Cancerverse when Sam leaves him alone to chase after the bomb in the first place. Sam seems to be serving as Rich’s tether to his humanity, and that’s just one of many reasons why both of these men need the other. The first two issues did an impressive job of introducing these characters and their relationships, but it’s Nova 3 which truly sells them as partners.

Jeff Loveness, Ramón Pérez, and color artist Ian Herring sold me on their partnership from their very first page, but I continue to be awed by the work they put in. Pérez’s action, especially, is continually stunning. Look back to the first image I posted: I love how Pérez uses the trail of Nova Force to show the arc of Sam’s attack, to suggest force and momentum.

What particularly caught my attention this month, though, was Herring’s colors. As always, they’re vivid, varied, and gorgeous, but I love how they tell a story as well. Most of the major characters shoot some form of uniquely colored energy blast, and the shade of their attack goes on to identify them throughout the issue. Pérez’s choreography is fun (especially as the fight splits into smaller and smaller panels), but you can follow the ebb and flow of the battle simply by seeing which color is currently dominating the scene. It’s such a fun, clever effect.

This, though, is perhaps my favorite instance. The yellow action lines emanating from Cosmo’s head in the first panel represent his telepathy, and thus, that same shade of yellow suddenly dominating the background in the next few panels shows how Cosmo has taken complete control of his opponents’ minds and brought them into his mental thrall. That’s his signature color. 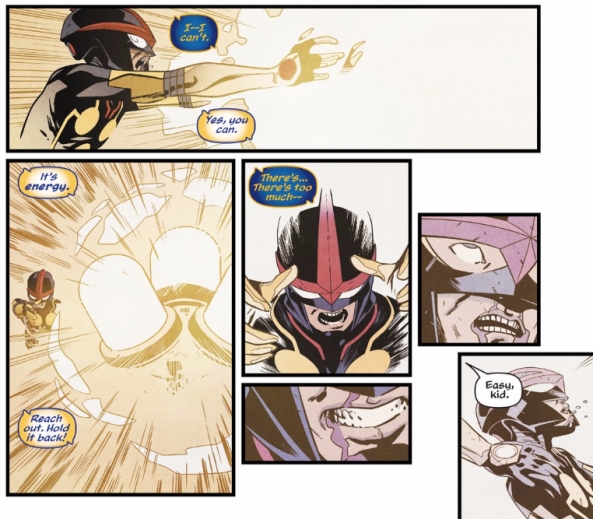 Meanwhile, this scene is defined by the lack of Sam’s signature blue. Instead, Sam’s struggle (and eventual loss) against the energy blast is communicated by the way its hue inundates Sam, wiping out the panels’ backgrounds before turning on Sam himself — by the time Sam loses consciousness (and thus control of the situation, which sends the panels drifting off into the gutter) his colors have faded completely and left him washed out and defeated (Rich, on the other hand, reappears in the next panel in a burst of rich red, taking complete control of the situation).

Taylor, I could probably talk about Nova‘s art alone all night, but that wouldn’t leave you much to discuss, would it? Were there any moments you particularly appreciated? How do you feel about Sam and Rich’s budding partnership? And how did that cyborg pick up a Canadian accent? Do you think he’s been intercepting transmissions of Degrassi beamed across the galaxy?

Taylor: I’m honestly not surprised to find a a Canadian cyborg on Knowhere. Whenever I read a list of famous Canadians I’m always shocked to see the likes of Jim Carrey, Ryan Gosling, William Shatner, Feist, and more. Who knew so many Canadians were amongst us! With that in mind it doesn’t seem like a stretch to find a Canadian in outer space.

Like you, Spencer, I’m once again wowed by Perez’s pencils. One thing I really appreciate about his work is that he animates human emotion and body language so well. Seriously, looking at the way he draws his characters is like taking a master in figure drawing. The best example of this comes after Rich prevents Knowhere from blowing up by tapping inot the Cancerverse.

Rich’s slouched posture and Sam’s best imitation of a rag dole make it clear just how much energy the expended in containing the explosion from the bomb. In particular, it’s amazing how vulnerable and weak Perez makes Rich look given the fact that he’s a burly dude wearing golden armor. It’s not easy to make someone like that look defeated by Perez captures it wonderfully. Rich’s face also shows as his grated teeth and deformed, Cancerverse skin reveal. But for my money what sells this sequence is the fourth panel. In that downward look it’s all too clear what Rich is thinking. Worried about what he just did in order to contain the explosion we the signs reservedness and doubt – a possible harbinger of obstacles to come for Rich.

Perez similarly impresses with his eye for action. Always a fan of full page spreads, I greatly enjoyed the scene when Sam bursts away from the bounty hunters to try and find the bomb, leaving Rich to encounter their enemies alone.

I’m a sucker for a page that looks busy but is actually pretty simple once you start reading it, as is the case here. However, it’s the last six panels that really grab my attention. As Rich fights his attackers the action zooms in and highlights the ferocity of the action. Perez opts in many of these panels to focus less on faces and more on the arm, weapon, or claw that’s doling out the damage. That’s a risky move, as it trusts readers to make sense of who is throwing what punch or spear. Readers could easily mistake certain parts of the action. But Perez’s faith in his readers pays off and the action doesn’t read confused. Rather, it’s kinetic and fast paced and a blast to read.

To focus too much on Perez’s artwork would do a disservice to the similarly good work he and Loveness turn in on the narrative. I think Rich and Sam make a great team and the dynamic of seasoned veteran and young adept between the two is spot on. This is no more apparent than when they, along with Cosmo, form a plan to take out the bounty hunter’s and their bomb all through telepathy.

Rich’s plan here is dangerous but realistically is the only shot they have. Being the old pro that he is, he knows that if they give the Nova helmets to the bounty hunters only more suffering can come of it. Similarly, he knows that if they give them the helmet’s they’ll probably be killed anyway. This knowledge comes from having been in similar situations before and the patience and understanding he shows Sam is great. Instead of berating Sam for wanting to give up the helmets (the inexperience of youth trying to avoid conflict) Rich explains why it’s a bad idea. He also encourages his young partner by reassuring him about his abilities. This is a great dynamic the two have set and it’ll be fun to see how they help each other grow as the series continues.