Look, there are a lot of comics out there. Too many. We can never hope to have in-depth conversations about all of them. But, we sure can round up some of the more noteworthy titles we didn’t get around to from the week. Today, we discuss Star Wars 28, Darth Maul 1, and Faith 8. We discussed The Woods 29 today, and will be discussing Paper Girls 11 on Wednesday, so check those out too!  As always, this article contains SPOILERS.

Patrick: Last week (geez, that was just last week), Mark and I expressed some confusion about the framing device for this “Yoda’s Secret War” story arc in Star Wars. There are so many layers of dramatic irony built in to the structure “Luke reads a story about Yoda written by Obi-Wan,” but I’m starting to suspect that I’m executing on writer Jason Aaron’s expectations every time I wince at a possible continuity wrinkle or yawn at the prequel-ness of this story. It is very easy to say “oh, this is where Yoda gets the idea for the cave on Dagobah” or “shouldn’t Luke reading this story lessen his first impression of Yoda?” or even “isn’t this panel ripped directly from Attack of the Clones?” So easy, in fact, that we posed a lot of those question last time, secure in our knowledge of Star Wars and storytelling in general.

But issue 28 introduces new twists and connections that challenge those earlier preconceptions. While on his spelunking journey, Yoda discovers Garro, a child exiled for not following the violent cues of his peers. Yoda asks Garro to teach him the ways of “stonepower,” even going so far as to address Garro as his “Master.” That’s our first indication that the reader’s expectations are running afoul of the story actually being told. “Master?” Yoda has never previously claimed a master — unless you want to count the force. And it’s not even like this is the Adventures of Baby Yoda or anything; he’s already small and frail. Presumably this story takes place within a decade of Phantom Menace, which still makes Yoda at least 800 years old. Essentially, it takes a Jedi Master admitting that he knows nothing to trigger the same in me, the Star War Master.

Because immediately after that “My master” moment, the story flips to Obi-Wan’s middle-age exile on Tatooine. Obi-Wan uses some force powers to stop a fight in Mos Eisley and inso doing, outs himself to Garro. 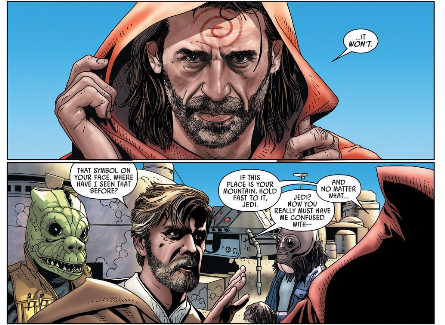 That’s right — the connection between timeliness has nothing to do with movies, despite my references to three different Star Wars films, and everything to do with the comics themselves. If there’s a lesson Yoda gleans from Garro in the past, it’s going to play out with Obi-Wan in this middle time. That, in turn, gives Luke a forehead-spiral shaped map to Vagadarr system, another genuine surprise story connection. But the biggest surprise — fittingly — comes on the final page when Yoda comes to the realization that though they have found the heart, they are not really in a mountain, but a living creature. I love having these kinds of surprised built into Star Wars as it plays so neatly off my irrepressible assumptions about the franchise. It’s cool to see this arc go from “fun, if disposable” to “vital and daring” in just one issue.

Drew: It’s a testament to just how bad The Phantom Menace is that Darth Maul holds up as one of its better parts. As a completely undeveloped character (George Lucas famously told voice actor Peter Serafinowicz to make all three lines of dialogue “sound real evil“), he’s more memorable for his striking design and his double-bladed lightsaber, which math tells me must be twice as cool as a single-bladed lightsaber. Point is, as someone who hasn’t seen Maul’s subsequent appearances on Star Wars: The Clone Wars or Star Wars Rebels, he’s not so much a character as he is a vague force of evil; a convenient way to kill off Qui-Gon Jinn, a character who arguably didn’t need to exist in the first place. So: writer Cullen Bunn could reasonably take the character in any number of directions, fleshing out his motives or relationship with Darth Sidious in hopes of finding some real characterization. Unfortunately, with all of the lightsaber battles (though I would be remiss in not pointing out that they are double-bladed lightsaber battles) and overbearing voiceover narration, Bunn seemed to settle to once again make Darth Maul sound real evil.

To be fair, Bunn doesn’t have a whole lot to work with here. Maul was necessarily unknown to the Jedi before the events of The Phantom Menace, which means he can’t really do anything of substance before then. Bunn makes that intertia part of the text, having Darth Sidious insist on waiting while his long-gestating machinations click into place, forcing Maul to seek quiet outlets for his violent outbursts. It certainly fits with what we know of the character — literally all he is is violent outbursts — but seems to lack any real imagination. Dude just wants to kill some Jedi.

Some of this may be intentionally vague — I suspect we will eventually learn what offense Maul means to avenge by killing Jedi indiscriminately — but others seem like missed opportunity. As a seething balls of hate and rage incarnate, it’s unclear why Maul would defer to Sidious’ authority (especially when you consider the history of Sith proteges killing their mentors). He seems to resent having his Id checked in this way, but he submits anyway — surely there’s some interesting backstory that would explain this anomaly. Unfortunately, this issue doesn’t seem interested in exploring why Maul behaves the way he does, and settles for simply reminding us that he was never a particularly well-developed character in the first place.

Spencer: I think many of us are our own worst critics, but that clearly doesn’t hold true for everyone. In fact, that key difference is essentially what makes Faith Herbert and Sidney Pierce arch enemies. Throughout Faith 7 and 8 Sidney’s gotten to Faith by projecting holograms of Faith’s dead friends and families (as vicious ghosts) blaming her for their deaths, a plan which succeeded in crippling Faith with depression. It takes a major pep-talk to snap Faith out of her existential crisis, but the only reason she was hit so hard in the first place is because she cares so much about people that she can’t help but bear the weight of their loss. Faith’s worried that she’s dangerous or a bad person, but if she was, she certainly wouldn’t feel this guilty.

Case in point: Sidney feels no guilt for any of her actions or compassion for others, passing all the blame onto those she perceives to be “below” her (which is pretty much everybody). 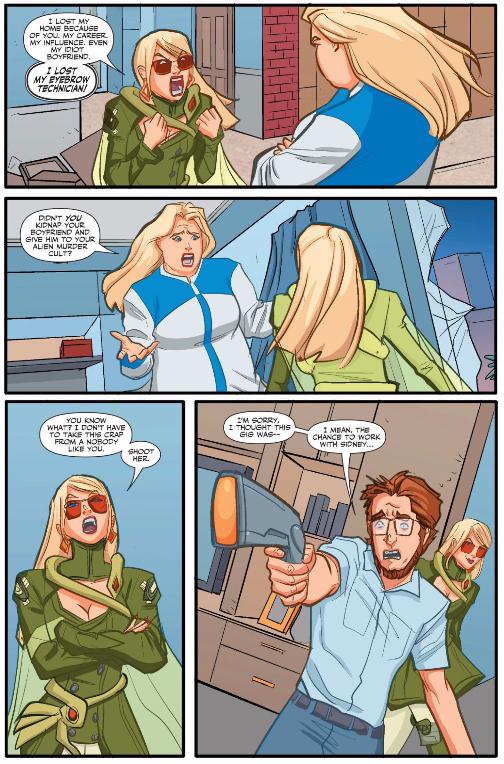 Sidney isn’t capable of introspection or feeling guilt because she’s so vain and self-centered. The lesson Jody Hauser, Joe Eisma, Andrew Dalhouse, and Marguerite Sauvage seem to be promoting here is that the kind of guilt many of us lay on ourselves is underserved; while it’s good to question our motives and give ourselves a good self-assessment every now and then, just the fact that we’re feeling that way at all is usually a sign that we’re on the right track. Self-criticism is a sign of a healthy conscience; we just have to be careful not to let it derail our lives, as it nearly did Faith’s.