Ryan D: Confession time: I’ve never cared for the Inhumans. As a child of the 90’s, the X-Men held the allure and accessibility which I impelled me to pull issues off the stand at my local grocery store. Add in how genuinely good the X-Men animated series was (for at least three seasons), and the ready-made allegories to McCarthyism and racial intolerance to keep me intrigued as an adult, and it’s easy to see why my frame of reference for X-Men has always eclipsed that of the Inhumans. However, Karnak’s solo title by Warren Ellis drew me in with its philosophical hook, and now I’m wondering, after a very sound issue number one, can Black Bolt pull me — and many other comic readers who might not be pre-established fans — into this character as Marvel doubles down on the Inhumans franchise?

Blackagar Boltagon is a (former) king, but the curtains rise on the titular character as he wallows in a state unfit for a sovereign. The plot strikes me as effectively simple: Black Bolt’s mutinous brother Maximus pulled a proper Loki, switching appearances with Black Bolt so that the Midnight King now languishes within the bonds and confines of some mystic-seeming super prison. All the ingredients for a solid prison story are on display: threatening fellow inmates, a towering warden-figure, and the whisperings of a mutiny; this series holds the potential to be the Inhumans equivalent of Devil in Cell Block D.

The hook here might seem to be the obvious: Black Bolt’s quasi-sonic scream — a power vaunted to destroy a city with a single syllable — has been nullified. Sure, this is “SuperHero 101”. Step 1) Take away the lead’s main talent/power, or their sidekick, or modify their defining trait. 2) Profit. The real thing driving this title, though, seems to be the creative team behind the work. Writer Saladin Ahmed might be new to comics, but his fiction, poetry, and articles carry a bit of weight behind them. I thought his words read as very clean, and he comfortably finds the beats necessary to tell a solid science fiction story. I found it a strong and smart choice of him playing the repetition game in the first moments of the book, with the narrator in the caption box almost acting as a Greek Chorus as it chanted: 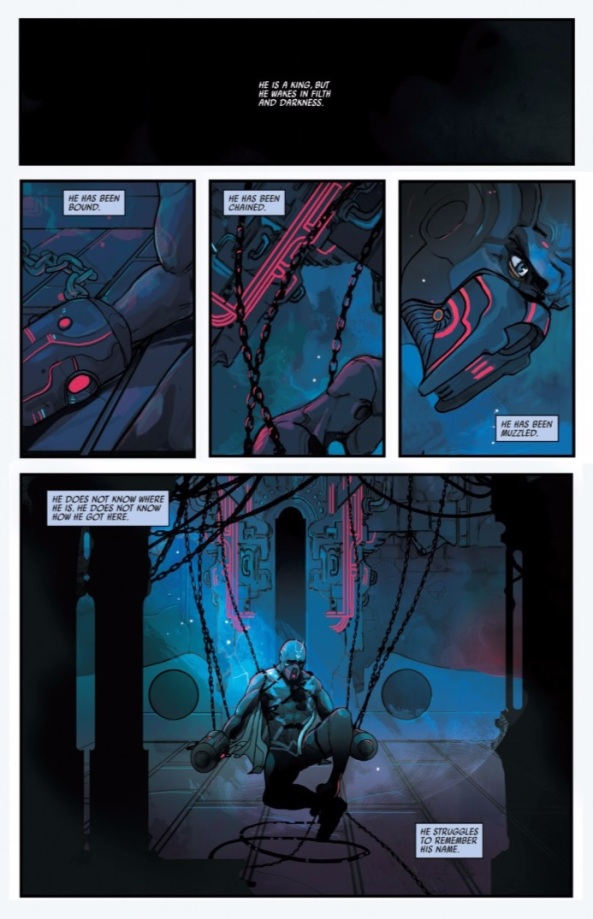 Hearing these ideas over cemented for me the gravity of Black Bolt’s incarceration, and exactly how unnatural of a state this is for the character — even without me knowing his full lore as monarch — though, to help readers, artist Christian Ward does paint a mural of the Inhuman on his throne to sell the idea visually. This repetition traps the reader in with Boltagon, as we scan from panel to panel looking for more clues about the prison. After seeing the Black Bolt relegated to one room for five pages, resisting then being shocked back into submission, we already know the thesis of the comic and need to know more. Very effective.

While he may be a neophyte to writing for a visual medium, I thought Ahmed pairs extremely well with Ward. Not being too familiar with Ward’s back catalogue, I didn’t know what to expect when the promotional material heralded his style as “trippy” and “mind-bending”, and I had my reservations seeing as the last series I saw with that style left me a bit confused in Bucky Barnes: The Winter Soldier. But I really need to hand it to Ward. In the same way that Gary Oldman is “an actor’s actor”, I think Ward must be “an artist’s artist”. The level of craftsmanship here is undeniable.

Take, for example, the early action scene when Black Bolt runs to save another denizen of the prison from torture inside of a shock pod of some nature (you know, a shock pod?): 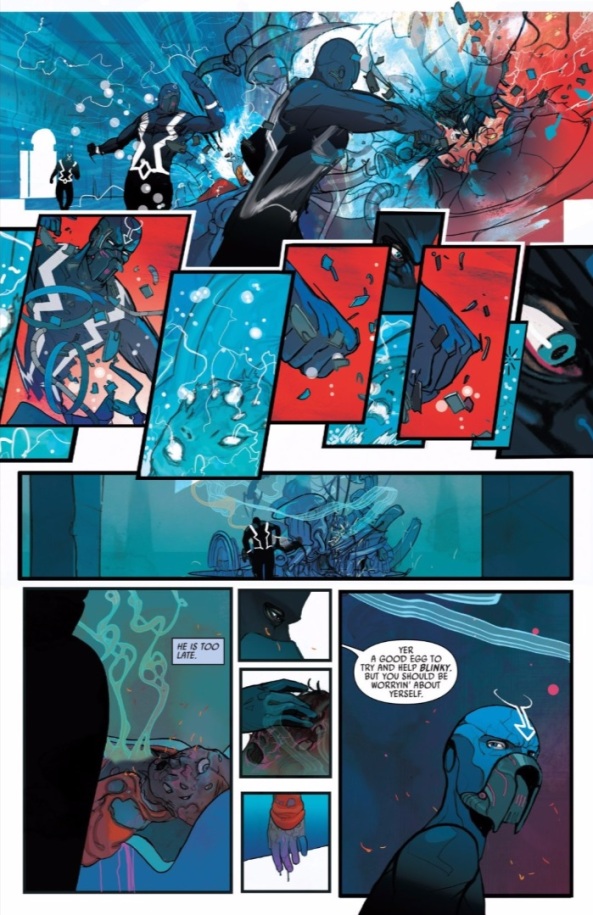 The word “kinetic” is often thrown around when describing successful fight scenes in comics, and while this one maintains that sense of energy in motion, it’s also very deliberate in its execution. Famous Hong Kong fight scene directors/editors (like Jackie Chan) employ a technique in which a hit is shown twice — once in the wide shot just about to make contact, then again in a close up with the strike actually a few frames behind so that, in essence, the blow is shown “twice” but registers as one, stronger hit. I was reminded of this technique when reading the first half of the page. Grant shows Black Bolt’s entire approach by including three separate Bolt’s in one panel, with the second featuring the long, full-bodied wind-up, and lastly the full transfer of momentum. There’s no need of any “CRACK!!!” onomatopoeia or any of the like, because our brains already did the work and we know how much went into that haymaker.

The following sequence of panels alternate between Black Bolt hammering at the pod further and the face of the torture victim, each panel varying, non-uniform in width or height of placement, so that even though we don’t see Bolt rear his fist back again, we understand that each fist is another strike. To further the aggression and frenzy of the Black Bolt, the background fades to a furious red, empowering him, while the alien in need is washed in a passive blue. By the end of the page, Boltagon’s fist panel is almost completely covering the panel of the face of the creature in need, with an extreme close-up of his eye acting as the punctuation on this visual sentence. Craftsmanship, mate.

Drew, maybe you’re more of an Inhumans guy than I am. If so, how does this depiction of the King of Silence working for you? Were you as happy as I was to see “Crusher” Creel make an appearance? And lastly, in the letters page, Ahmed promises the exploration of some larger themes in this title. What would you be curious to see?

Drew: Honestly, I’d love to just see more of this. It’s clear that Ahmed intends to build the cast out a bit, introducing several other inmates at this cosmic prison, but I absolutely loved the tight focus on Black Bolt here. Ryan, thank you for identifying the narration as echoing that of a Greek Chorus — I knew it felt epic, almost mythological, but I think your assessment nails it. The narration holds at this intriguing omniscient viewpoint, giving this issue a distinctive voice, totally unlike the typical first person voiceovers we’re so familiar with. It’s the kind of technique that would feel natural to a prose writer, but is a little odd in a comic, lending this issue an idiosyncratic literary quality.

That’s not to minimize the importance of the art. Indeed, the omniscience of the Greek Chorus only works because we can see the rest of the story for ourselves — the bold declarations of the narration would lose their power if that was all the story was. And Ward is more than up to the task, switching effortlessly from illustrating points made in the narration to implying Bolt’s subjectivity in a way the chorus can’t. Look at the way Ward handles Black Bolt’s memories of how he ended up in the prison: 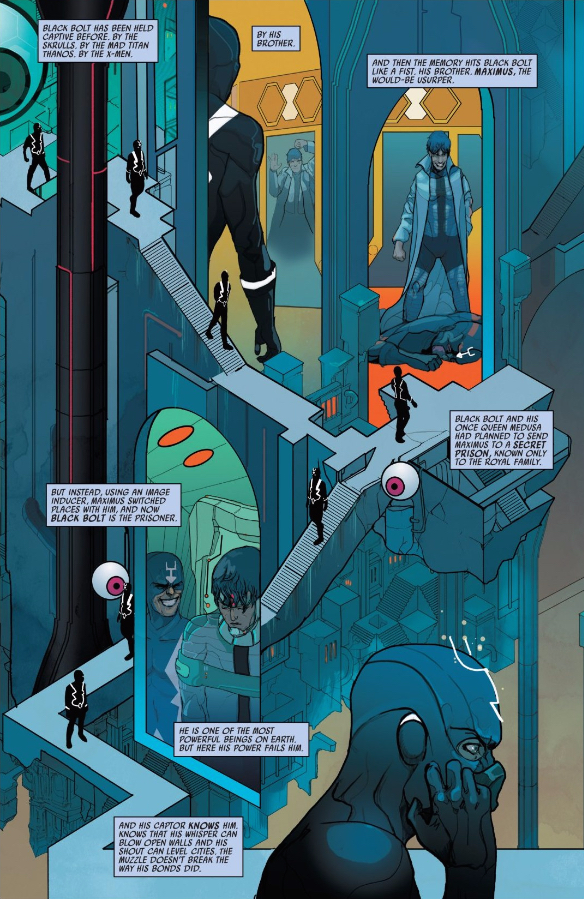 At first blush, we might understand this sequence as showing Black Bolt as he continues to wander the labyrinthine corridors of the prison. By this point, Ward has already established the technique of projecting Bolt’s memories on the walls of the prison, so we might understand those images as imaginary — a projection of Bolt’s subjectivity onto an objectively real space. But unlike elsewhere in the issue, Bolt seems to be actually looking at the memories — something that wouldn’t be necessary if he was real and his memories were only manifested on the page for our benefit.

Instead, I might suggest that this whole sequence is taking place in Bolt’s mind. Or, to put a finer point on it, the whole page is a projection of the inner workings of Black Bolt’s memory, blown back and up from his head in the lower right corner of the page. In this way, while the Escher-esque stairs and paths he finds himself on may reflect the physical prison he’s in, they also reflect the twists and turns of his memory. The miniature Black Bolt we see is his psyche as it searches not for an escape from the prison, but for the explanation that eludes him. He’s lost in more ways than one.

Of course, the notion that things aren’t quite what they seem comes back in a big way at the end of the issue, when the formerly-dead Blinky casually congratulates Black Bolt from also making it back from the dead. Here again, we may feel some Greek influence, defining Black Bolt’s escape as some kind of sisyphusean nightmare (or Blinky’s state of perpetually being tortured to death as cruelly promethean). Indeed, that ending recontextualizes the repetitions at the beginning of the issue, suggesting that Bolt may have been literally dying between those repetitions, returning to his last save point until he learns to dodge the obstacles.

All of which is to say, this was a taught little first issue, one that beautifully introduces the protagonist and his world while setting the stage for more characters and conflicts to come. Moreover, this issue establishes the clear narrative and and visual style of this creative team, something that would be more than enough to bring me back, even without the inarguably hooky premise. It’s about as good as first issues get.