Today, Spencer and Patrick are discussing The Flash 22, originally released May 17, 2017. As always, this article contains SPOILERS.

Spencer: So now that the story’s over, I’ve got to ask: what was “The Button” actually about? While the crossover’s first three installments each served up satisfying stand-alone stories, they never came together with any kind of purpose. There’s a touching Batman story buried in “The Button,” but if it was meant to move forward the overarching “Rebirth” storyline, it essentially ended up standing still.

As you might imagine from that spiel, the moments in The Flash 22 that work best are the ones unrelated to the “Rebirth” or Watchmen teases. Joshua Williamson’s take on Reverse Flash continues to be delightfully unhinged; the fact that Eobard seems to now be a living time paradox has only made him more crazed, confident, and ambitious than ever. He believes that he can no longer be hurt or manipulated, but Dr. Manhattan proves him wrong; as his closing monologue reminds readers, Manhattan believes that we’re all puppets, and that no one is beyond manipulation, not even a living time paradox. 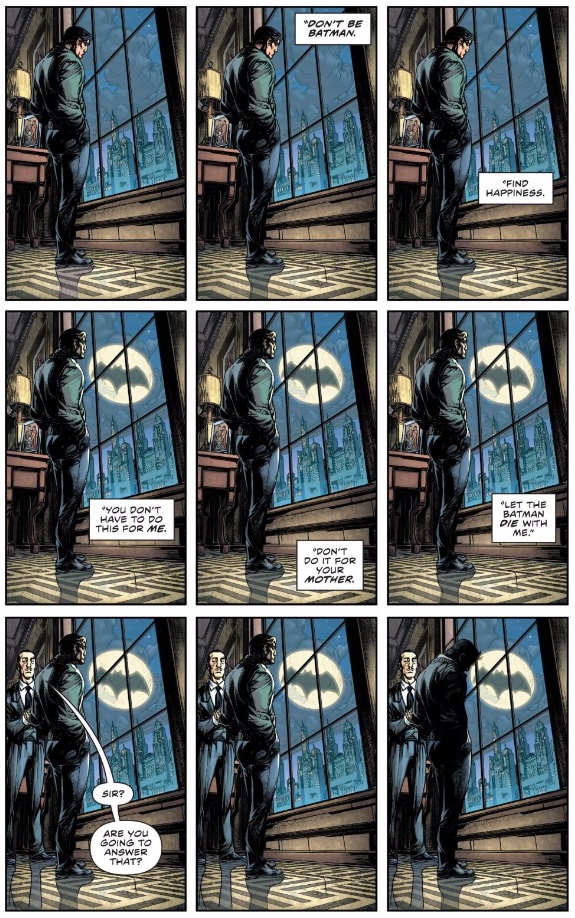 Bruce meeting his father (or, at least, his Flashpoint doppelgänger) is easily the most powerful thread of “The Button,” so it only makes sense that it’s the only one that seems to have any lasting repercussions on the characters (even if it ultimately won’t amount to anything more than some extra pain for Bruce; we know he’s not retiring). Williamson and Howard Porter are smart to return to the nine-panel grid (star of both Batman 21 and Watchmen itself) here, giving the crossover’s closing chapter some thematic coherency the plot itself never quite achieves.

As a chapter of the “Rebirth” mythology, Flash 22 just ends up feeling like a rehash of DC Universe Rebirth 1. Jay Garrick takes up Wally West’s role in that story, but while Geoff Johns centered Rebirth on Wally’s emotions, personality, and past, the most we get from Jay is a reminder that he’s a Flash and a friend. Williamson is counting on Jay’s appearance alone to make an impact — counting on nostalgia and familiarity many of his readers may not have — instead of giving us a reason to get invested in Jay as a character.

Flash 22 also essentially closes at the same exact place Rebirth did. Sure, this issue does give an official confirmation that Dr. Manhattan is the force behind this all, but all we see is his hand — it’s a teaser that, at most, takes maybe a quarter of a step forward from the one that closed out Rebirth. Readers are given no new information, and Batman and Flash learn even less. I couldn’t help but notice that Flash 22 was released almost exactly a year after DC Universe Rebirth — I’m guessing that DC wanted to remind readers of the Watchmen thread running throughout “Rebirth,” but couldn’t give anything else away without stepping on the toes of the upcoming “Doomsday Clock” event, so they came up with crossover that’s the equivalent of a “Save the Date” notice, of someone telling us “Hey, remember how the Watchmen are supposed to show up soon? Won’t that be cool?!”

Despite a few intriguing theories to the contrary circling the net, it was always a given that the Watchmen would be showing up, making this issue an excruciating lead-up to an underwhelming, obvious reveal. Take the scene where Eobard meets his doom.

The majority of the readers know Manhattan’s behind this, making the attempt to play coy here particularly frustrating. Honestly, I don’t know if any threat could live up to this kind of hype. That said, I don’t really understand why Eobard’s so scared here either. Yeah, Manhattan’s basically a god, but that’s not something you can tell about him from just a glance. Is Eobard just that horrified by nudity?

This all just smacks of a harmful amount of reverence for Watchmen (and the film adaptation showed us how dangerous that can be). I completely get why the series is so important, but if it’s going to be treated like such a sacred cow that creators just copy its techniques wholesale, why even revisit Watchmen at all? I don’t want to see Geoff Johns or Joshua Williamson try to be Alan Moore or Dave Gibbons — they can’t be — I want to see their takes on the property. Say what you will about the effect Watchmen has had on all comics since, but Moore and Gibbons had a very specific story they wanted to tell, very specific points they wanted to make, and a new, unique way to tell it. More than dysfunctional heroes or nine-panels grids, that should be Watchmen‘s legacy, so it’s a bit of a bummer to see an “epilogue” that mostly floats by on the recognition of Watchmen‘s signature style.

Patrick, I’m guessing you might have more thoughts on the structure of these pages, but I audibly groaned when I first saw them — it’s just another empty “Oh, look, Watchmen! How exciting!” moment in a crossover that seems to have no other reason to exist. DC: anybody who is going to be excited for this story already is. Don’t overload us with hype — just give us a good story, please.

I dunno, Patrick; I was frustrated and disappointed in this issue from beginning to end, despite my efforts to keep an open mind about the entire “Rebirth” and Watchmen business from the start. Did you have a better time with this one? Is there anything DC can do to live up to the hype at this point, or are all their efforts to revisit Watchmen doomed to forever live in that story’s shadow?

Patrick: I think there’s a little more we can glean from those last two pages than just “WATCHMEN!” I’m struck by the empty panels in that spread you posted above. That’s not a Moore / Gibbons technique, but it is making reference it, right? Normally, we’re cutting back and forth between two different sets of action — or sometimes between action and the panels of a pirate comic book. But that’s not what the creators are doing here. (I’m unclear as to who to credit here — that could be Porter’s work, but it could also be Gary Frank for all I know.) There’s one clear story in these panels — the yellow and red button is replaced by Superman’s yellow and red insignia. Make of that whatever you want. The other panels are solid black — whatever goes there, we don’t get to see it yet. That leaves me hopeful that there is a part of this story that we have yet to understand.

It is sorta hard to talk about anything other than how this issue serves as a reminder that we have special guests coming up in November. I don’t think that’s all because Doctor Manhattan sucks the air out of the room, but also because like half the issue takes place in… I don’t even know how to refer to the setting of the first half of this thing. The speed force? The bleed? The space between time-travel? Ultimately, it doesn’t take place anywhere. It seems like Williamson’s Flash is totally aware of how frivolous this makes anything that happens in this space. Bruce hears voices, sees echoes of things that could have been, and Barry tells him to keep his fucking head in the game. He says “Don’t listen to them, Bruce. You’ll stray. Get pulled into an era. Lost.” It’s some strange syntax, but Barry’s point is obvious — let’s not waste our time with the kind of nonsense we can’t unpack.

That same attitude returns at the Wayne graves.

Maybe it’s because Barry’s dealt with one too many stories-out-of-time, but it sounds like he can’t accept / has no patience for this kind of meta-mystery — check out the sarcastic quotes around “God” and how he insists on doing an autopsy anyway. We know that this story is going to strain even the more generous goodwill of the comic reading community, it’s nice to know that Barry Allen has already folded his arms in defiant protest.

If there’s one part of this creative team that actually seems totally game for the challenge of embracing a story this fucking nutso, it’s colorist Hi-Fi. For the first half of this issue, the contrast is off the charts, with electric blues, neon yellows and dark, flaming reds all vying for space on the same page. Spencer mentioned that Thawne seems particularly unhinged, which is perfectly echoed by the visual cues of his environment. Look at what happens when Reverse Flash meets Doctor Manhattan.

It’s a visually stunning piece of color work, and the only thing not swallowed by all this chaos is that smiley face, which is beating a hasty retreat back to it’s home reality.

There’s one last thing I wanted to touch on, and it’s the nature of impermanence of these other realities. We might get glimpses of Reverse Flash, Jay Garrick, Thomas Wayne and Doctor Manhattan in this story, but three of those four characters are seemingly destroyed by the time the Epilogue rolls. I had always assumed that Johns’ Rebirth 1 was critical of the time that had been stolen from our heroes and the relationships that were erased, but not so sure Williamson shares that critique. Old continuity is old. Sure, sometimes you have to deal with the baggage they leave behind, but ultimately, it’s already dead.