I’ve never been a huge fan of dramatic irony — I can appreciate how giving us more information than the characters have can produce tension (or humor), but that information kind of gets in the way of relating to the characters. Still, I have a heck of a lot more patience for dramatic irony than I do its exact opposite, where characters are privy to information that is deliberately withheld from the audience. Not only does the tension it create feel cheaper (amounting to little more than a narrative chant of “I know something you don’t know”), it makes the characters even harder to relate to, as we’re necessarily left in the dark about what they might be thinking or feeling. All of which kept me from truly enjoying Batgirl 14.

The issue is built around and driven by a series of flashbacks to Barbara’s earliest days as Batgirl. It’s a structure that I should love — I’m a diehard LOST apologist — but I found myself frustrated by it here. I think part of the problem is that this story is thus far a mystery, and the clues are largely coming from a flashback story we don’t yet know. It’s not the way detective stories are meant to work. It could well be that this arc isn’t meant to be read as a detective story, but after two installments of straight-ahead one-off procedurals, it’s fair to say that writer Hope Larson has planted some expectations in our heads.

The other big point of frustration is that Nightwing, who features prominently in this issue, is also privy to that flashback, so we regularly have two characters talking about some shared memory, leaving us to feel like a third wheel. 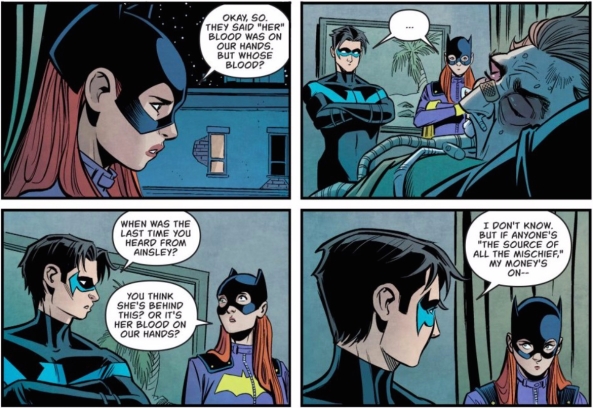 Dick’s familiarity with whatever ultimately happened with Ainsley allows him to draw some kind of conclusion, but it’s impossible to play along since we only have part of that story here. I mean, it seems likely that the Red Queen is either Ainsley or her as-yet-unseen “troubled” sister, but Babs and Dick clearly have more information about both of those people than we do at this point. I’m sure this is all in service of some kind of dramatic reveal, but in the meantime, I can’t help but be distracted by Larson’s moves to keep us in the dark.