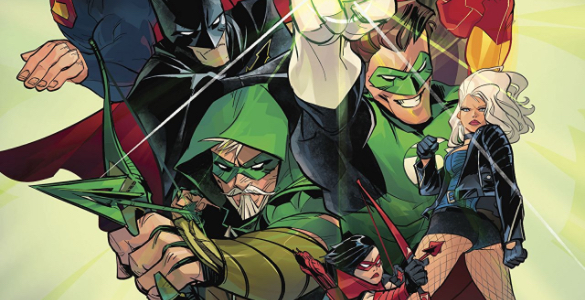 Green Arrow 31 brings Oliver’s “hard-traveling hero” journey to an end in a satisfying, uplifting manner, helping Oliver earn a new reputation amongst the superhero community while also reminding him of the unique role he plays within it. Likewise, Ollie and Black Canary fulfill their missions, destroying the Ninth Circle’s satellite and rescuing Wendy/proving Ollie’s innocence, respectively. This issue does what it needs to to be a successful finale, yet there’s a few nagging details that keep it from being quite as strong as the installments that proceeded it.

For starters, Green Arrow‘s political bent is nowhere to be found. With so much to do in this issue, and with the Ninth Circle remaining an active threat beyond the conclusion of this arc, it’s understandable that Benjamin Percy didn’t put out a political treatise, but the politics and social justice issues have been a huge part of what’s made this arc so successful, and without them, Oliver’s final opponent ends up feeling a bit toothless — his rants about pain are nowhere near as interesting and complex as the Ninth Circle’s usual machinations, and a weird attempt to mirror Oliver and his burnt opponent never feels fully-formed. The bad guy’s name is never even mentioned within the issue!

There are also some actual procedural, storytelling details that don’t fully add up.

What happened to Wendy? Somewhere between panels 1 and 3 she completely vanishes, not seen again until Dinah and Emiko defeat the auctioneer and comfort her. It looks like the auctioneer is attempting to use her as a human shield in panel 1, but I suppose she’s simply supposed to be a prop for him instead — but it still makes it shocking when Wendy just vanishes, and Dinah looses a sonic scream just a page later that would probably liquify Wendy’s brain if she was anywhere near that throne (and remember, she’s chained to it).

(Also, what exactly is Dinah’s New 52/Rebirth backstory? Percy’s take on it here feels foreign to me, but I’ve missed enough of Dinah’s appearances since the reboot that I’m not fully sure of what her past is actually supposed to be right now.)

Even the ending is a bit off, segueing right into a Dark Knights: Metal crossover instead of giving Oliver a chance to deal with some of the significant changes this finale has brought to his life (at least we can’t blame that one on the creative team). Overall this is still a rather enjoyable issue with a lot going for it, but after the stellar year Green Arrow has had, it can’t help but pale a bit in comparison.