Rocket is an amazing series. Adam Gorham’s artwork is evocative, gritty and ambitious in a way that is simultaneously grounded and totally off the wall. There’s also the novelty of the persistent gutter narration, lending the whole thing a literary noire vibe that seldom makes its way into such a strongly visual medium. One aspect of this series I’ve seldom found an opportunity to praise is the rhetorical strength of Al Ewing’s writing. The story itself is compelling, but I’m referring to the moment-to-moment use of language and how Ewing uses tonal shifts, word play, and rhetorical flourishes to illustrate Rocket’s emotional journey. And this issue takes us on one hell of a journey.

Oh, I’m engaging in my own world play, I guess! The issue opens with Rocket’s dying brain feverishly cycling through his own happy memories. The gutter narration sets the stage: “When Rocket was somebody else… somebody happy…” but it need not have done so. Rocket and Blackjack O’Hare’s dialogue is crackling with campy excess of some pure, boundless happiness. I defy any icy heart not to melt at Blackjack reassuring Rocket of his loyalty with this acrobatic punnery. 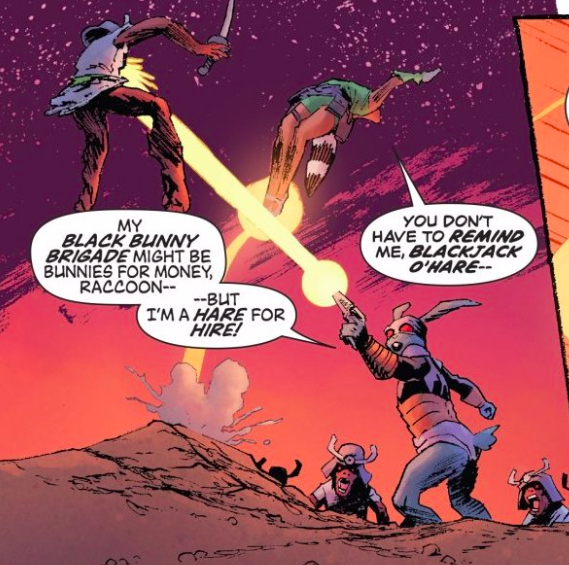 Both “bunnies for money” and “hare for hire” are instant classics. They’re not so much jokes as they are turns of phrase that are effervescent in their levity. These are the cotton candy, soda pop adventures of fuzzy space animals! It’s this version of Rocket’s life that he’s fighting and scheming for, even as Otta betrays him and even if it means giving up his share of the loot.

Rocket’s subconscious/unconscious brain won’t let him off the hook, linguistically speaking. He’s haunted by the people he’s killed… err… strike that: the people he’s murdered. It’s an important rhetorical distinction, one that Rocket himself insists on with his flippantly violent catchphrase “BLAM! Murdered you!” This is where the language starts to pivot from playful to destructive, and it’s telling that Ewing bases this turn on a phrase from Rocket’s repertoire. Ewing is not inventing something compelling about Rocket, merely revealing it.

By the end, Rocket has saved the riverlands and escaped with his life, but the tone of Ewing’s language has returned to utter despair. This chunk from Ewing’s last bit of narration (which jumps out of the gutter to join Rocket in the middle of a dark, empty bar) struck me as particularly sad and insightful:

“…he’d always be more Otta’s type. They were both lowlife thieves, after all. Lowlifes who hurt people. And that other thing — the thing Rocket and Otta would always and forever have in common. Neither liked him much. So Rocket sat in a bar that was as empty as he was, and he looked at the gun that had killed him, and a holosnap he carried around of somebody else… and he waited.”

Ewing’s using the same voltage of colorful language here, but for decidedly different purposes. This is unambiguous — Rocket feels bad about himself and about the life he leads now. The comparison to his older life in re-emphasized with a sampling from the language at the start of the issue: the picture of is “somebody else,” implying the end of the sentence for the first page, “someone happy.”

Perhaps even more upsetting, Rocket has accepted this negativity and even insists on the language Ewing uses in this narration. When Peter Quill eventually shows up to pull Rocket out of this funk, Peter off-handedly refers to “that photo of you.” Rocket corrects him: “it’s a holosnap, Quill. You’re in space. Learn the language.” We last saw that word on the previous page, in the narration I quoted above. Learn the language, indeed.

3 comments on “Rhetoric Paints the Picture in Rocket 6”