One of the many miscalculations of 2016’s Batman v Superman: Dawn of Justice was predicating the success of the entire film on the idea that it’s cool to see Batman and Superman fight. To climax an entire movie with the Dark Knight and the Kryptonian beating the crap out of each other shows a fundamental misunderstanding of why people enjoy these characters. What we like is Batman and Superman being best friends. Together, they’re the Sour Patch Kids of DC’s trinity; a little sour, but also sweet.

In the comics, taking that dynamic, with its years of history and built-up trust, and translating it into text on the page in a believable way is a difficult task, but in Action Comics 992, writer Rob Williams (working from a story by Dan Jurgens) pretty well nails it. 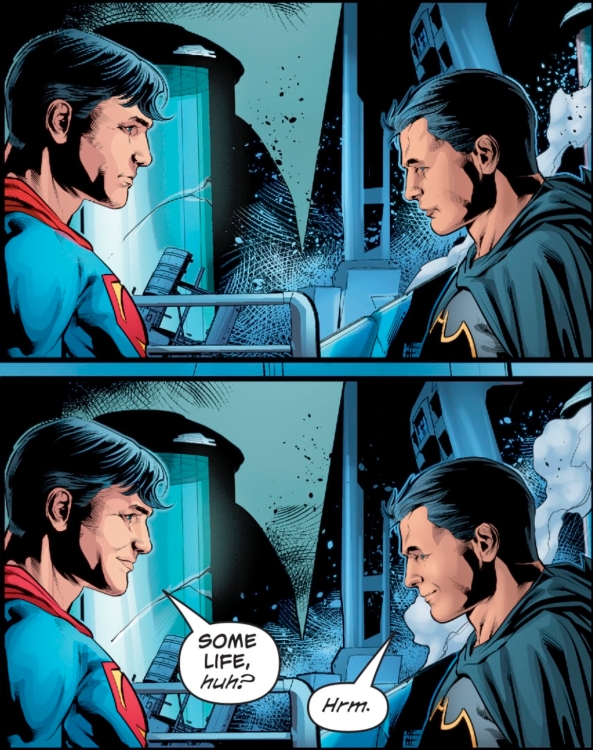 Superman is still reeling from the revelation that his father, Jor-El, is Mr. Oz. (Or, at least, is Mr. Oz right now — there’s wonky time manifesting itself in the DC universe right now, which certainly gives future storytellers an out when it’s no longer prudent for Jor-El to be a villain.) Batman shows up at the Fortress of Solitude to check in on his friend, and even though his visit only comprises a few short pages in the issue, it’s the strongest bit by far. There’s a genuine sincerity to Batman’s concern for his friend, and a grounded reality in the way they communicate with each other; even though they’re discussing villainous fathers and time-meddling the conversation feels true-to-life — relatable, even, and relatability is an underrated value in DC works.

It’s also remarkable how truncated and rote Superman’s conversation with Lois a little later in the issue feels by comparison. Lois more often than not merely checks the box of faithful, wise, and long-suffering wife, and she’s not given anything more meaty here. So look, I’m not saying that Batman and Superman should be together — Superman knows he can’t “fix” Batman, and he doesn’t need that kind of dour toxicity in his life 24/7 — but I’m also not saying that it’s an Elseworlds story I’m uninterested in reading.