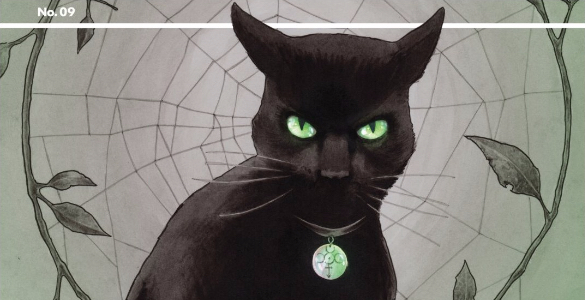 Whether it’s Harry Potter or Luke Skywalker, I tend to think of the prototypical fantasy protagonist as being relatively unfamiliar with the strange world they live in. It allows their confusion or surprise at the unexpected to mirror our own, and their ignorance offers a reasonable justification for someone to explain that wizards are real or that the Jedi channel a power called the force. A more knowledgable fantasy protagonist, then, might be hard for an audience to keep up with. I suspect this is how I’d feel about Rowan Black — who is undoubtedly knowledgable about the fantastical elements of her world — if she weren’t on her heels from issue one. She may have knowledge and motives that we don’t fully understand, but she’s just as clueless about what the heck is going on as we are. Indeed, issue 9 might even leave us with more knowledge than she has.

Granted, some of that knowledge is of the more banal “she doesn’t know her partner’s wife just went into labor” variety, but we get plenty of juicy details that sets the stage for some big conflicts down the road. The most obvious is the Aira goon that’s already inside her house, though her familiar might have that taken care of before she arrives.

This is the kind of detail that a jaded protagonist could spoil, but Greg Rucka and Nicola Scott cleverly keep Rowan miles away from this reveal, giving us that Aira goon to share our surprise with. Actually, the surprise is quite a bit more remarkable than that — there are few details as expected in a witch-y tale than a talking black cat, but the discipline this creative team demonstrated in holding it back to this exact moment pays off beautifully, managing to shock me with an element straight out of Hocus Pocus.

But the bit of dramatic irony I’m most excited by is Morgan’s growing suspicion of Rowan. Back in issue 7, I didn’t know what to make of the fact that Rowan was talking to all of those witnesses without Morgan, but I see now the awkward position it puts him in — he may not have heard what Rowan said to those people, but he definitely heard what Brandt was screaming before Rowan shot him. He already seemed suspicious of something, but now he has some strong circumstantial evidence to think that Rowan may have put a hit out on Dunridge. Rowan and Morgan don’t say as much as a word to each other in this issue, but with Morgan’s baby on the way (and Rowan’s phone off to miss the call), I suspect that tensions will be quite high when they reunite. I can’t wait.