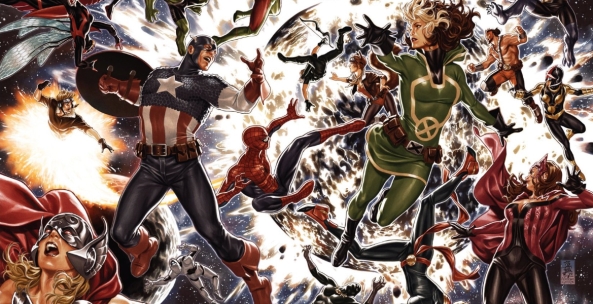 Drew: The Marvel Universe is big. That much is clear from the very beginning of Avengers 675, which skips across the globe to catch up with Marvel’s countless superhero teams and fictional countries as they deal with the Earth suddenly being transported…somewhere. Characters helpfully repeat each other’s names (and the names of their respective teams) to orient us, but being overwhelmed is kind of the point — these characters are facing down utter chaos, and that chaos is everywhere. Crossover events will often feature these kinds of “cash in all the chips” moments, straining our familiarity with Marvel’s lesser-known characters to really sell the massive scope of the story. But that’s where this issue differs from the standard crossover; where other stories simply revel in the bombast of throwing all of these characters together, Avengers 675 uses it as a cover to inject a new character into the narrative. [Phew, are there SPOILERS to follow.]

First, let’s back up a bit. This issue delights in skipping us around the globe, flitting from the Avengers to the Champions to the Unity Squad and everywhere in between. Any one reader will recognize some of these characters, but at least a few will be obscure to all but the most die-hard Marvel readers. The point is, there’s this feeling of recognition mixed with the confusion of not recognizing other characters that’s going to be familiar to anyone whose ever picked up this kind of crossover. So by the end of the issue, we’re used to just rolling with the unfamiliar faces — they’re a member of some team book I’m not reading or something, fine.

But then the issue hits us with it’s big final page reveal of…Voyager? 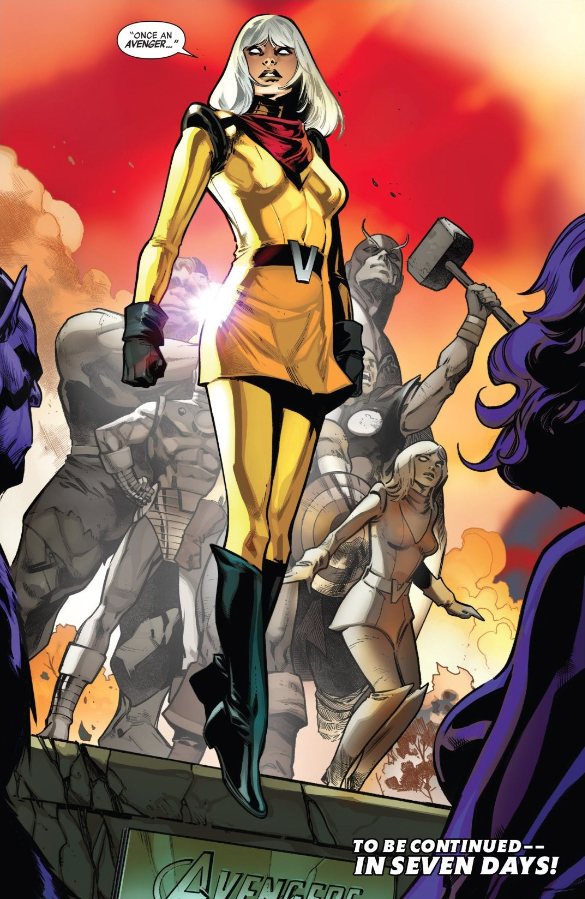 As a relative neophyte to Marvel’s storied history — and primed for this sort of introduction from the rest of the issue — I just kind of assumed this really was a long-forgotten-but-beloved character from the annals of comics history. Indeed, it wasn’t until I tried tracking this mystery woman down that I realized nobody knows who she is.

But writers Mark Waid, Al Ewing, and Jim Zub play the reveal so straight, I ended up just nodding along like I had just remade her acquaintance at a party, and had to fake my way through remembering her name. But while we have no idea who this character is, everyone within the Marvel Universe seems to. Hercules, Quicksilver, and Scarlet Witch all have reactions that suggest that they know this woman, and artist Pepe Larraz cleverly inserts her into that statue of the founding Avengers behind her, suggesting that she’s always been part of the Marvel Universe (perhaps taking Janet Van Dyne’s place in the original Avengers lineup).

So…what the heck is going on here? Are Waid, Ewing and Zub retconning this character into Marvel history (perhaps via the changes Kobik made at the end of Secret Empire)? Or is Voyager more like one of those memory-implanting parasites from that episode of Rick and Morty? Either would be unusual, but not unheard of, making all explanations (including more standard dream/alternate reality/etc ones) equally unlikely. We don’t know what’s going on, which is a rarity in the oft-formulaic world of massive crossover events.

Though maybe “crossover event” is the wrong word for this weekly series experiment. DC has tried its hand at this kind of series in the past — most notably 52, which also featured Waid on its writing team — but we’ve never seen anything quite like this from Marvel. I don’t love weekly series as a concept, but I have to admit that this issue went a long way towards hooking me — there are some intriguing mysteries here, and since it features pretty much every hero in the Marvel roster, I expect to see some of my favorites get their due. Michael, I’m curious if this had the same effect on you. Do you like having all of those heroes blow past you whether you recognize them or not, or does this kind of bigness only work when you’re invested in some kind of critical mass of the characters?

Michael: Avengers 675 is a fairly simple plot, but the tidal wave of Marvel characters that comes at you makes it a little more dense. The purpose of this issue is to introduce us to this cast of characters — with a helpful “who’s who” page at the end — and set the stage for whatever “No Surrender” becomes. The bulk of my all-encompassing Marvel knowledge comes from the era that began with Brian Michael Bendis’ New Avengers, so I’m not as familiar with some of these new characters like the U.S. Avengers. Once this story gets rolling however, that shouldn’t really matter.

The whole schtick of 52 was that it was bringing C and D-level characters to the forefront in compelling storytelling — which I think it successfully did. If “No Surrender” is following that mold — which it seems to be, at least somewhat — then readers should have no problem latching onto less familiar characters like Red Wolf, Synapse or Enigma. If the creators behind the story give us a reason to feel for these characters,  then perhaps we’ll be as attached to them as some of their frozen compatriots. Maybe this will include characters like Voyager?

Like Drew, I was completely fooled by Voyager. There is so much history in Marvel lore that I figured she could very well be a former Avengers member that I just never heard of. Of the Kobik/Rick and Morty theories that Drew put forth, I’m inclined to go with the latter. I’m assuming that Voyager is part of this stolen Earth plot and has inserted herself into Avengers history to cover her trail. Then again, I’m always trying to guess who the bad guy is. This isn’t the first time that a character has altered history and positioned themselves as a veteran Avenger, however. That New Avengers era I mentioned earlier saw the creation of The Sentry: a Fabio Superman analogue who had a dark force inside of him called The Void.

While we still don’t really have a clear idea of what “No Surrender” is about, the theme of Avengers 675 seems to be “what it means to be an Avenger.” The book opens with (Living Lightning) busting up a couple of small-time criminals, wondering what happened to him. 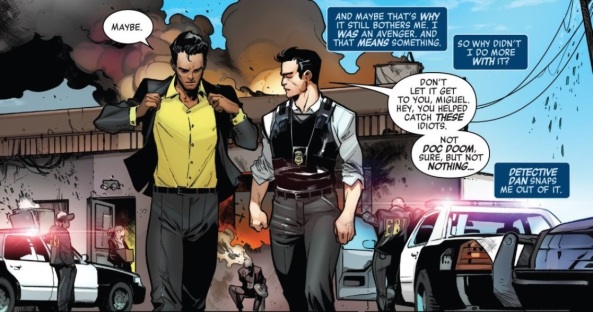 He feels like he’s wasting his talents — something I’m sure we can all relate to at some point in our lives. Like a once bright-eyed writer who’s been reduced to writing copy for a paper towel company, Lightning believed he was meant for something greater. Lucky for him, a planet-wide catastrophe might help him sort that all out.

The only internal conflict we among the heroes thus far is between Wasp and Rogue. Nadia Van Dyne is shocked that no one seems to care about the well-being and survival of Avengers butler Jarvis, while Rogue wants to focus on the bigger picture. 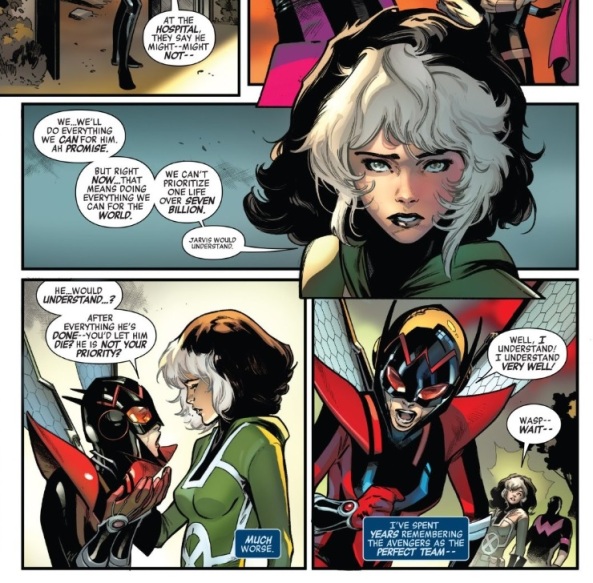 These characters need to be set on extreme opposites to create some conflict, but it stands to reason that both of them could be a little bit more reasonable in their causes. Nadia should realize that the whole damn Avengers can’t solely focus on Jarvis and Rogue can likewise work on her bedside manner/leadership skills.

It’s hard for me to judge “No Surrender” on Avengers 675 alone. And I’m intrigued with this whole Voyager reveal, so at the very least I will check back in next week to see what she’s all about. And I know that this is an Avengers title, but how come the X-Men always get sidelined right away in these things? Where’s the mutant love? One other thing to be noted: this is the second Marvel event in a row where Captain Marvel is trapped in space, shut out from Earth.