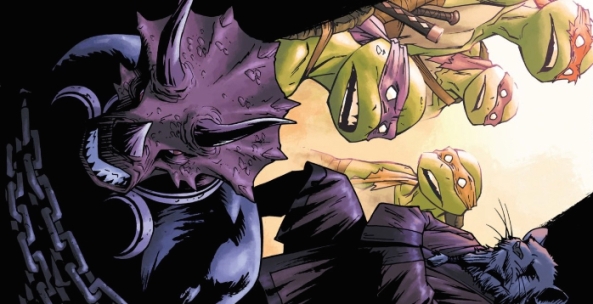 There are obvious advantages to teamwork. You could argue that that’s one of the defining qualities of the Teenage Mutant Ninja Turtles — they support each other, cover for each other’s weaknesses, and the quartet is stronger for it. But Mike, Leo, Don and Raph are brothers, and have earned the right to trust their eternal alliance through multiple lifetimes of shared experiences. Teenage Mutant Ninja Turtles 78 goes outside our main heroes to explore the possible dangers of teamwork.

That may be kind of a strange message, but the issue starts in Washington D.C., away from the actual action on the ground. Agent John Bishop (did we have a first name before this moment?) lobbies Senator Robert Lawson of Michigan for access to military gear and personnel to fight the Triceratons in Manhattan. Lawson is entering into this arrangement with Bishop knowingly without all the facts. Writer Tom Waltz makes a point of showing both these men and the reader a whole bogus news report. We know “Burne Thompson, Channel 6” is full of shit because we’ve seen the Triceratons, but it comes as a surprise when the report ends that Lawson also understands the report to be fabricated. This is where the dramatic irony takes over, however, as the readers know that the alien invaders originally came in peace, and Lawson only knows what Bishop tells him. Bishop is exploiting Lawson’s fear to force him into allying with him.

We’ll see that same kind of disastrous allying again at the end of the issue, when Splinter reveals that the Foot Clan has teamed up with the beefed-up EPF. That alliance follows along a similar track — Splinter fears for the lives of his sons, and teams up with a man whose motives he doesn’t fully understand — but it’s obviously so much worse because we have a personal connection to Splinter.

The creative teams preps the reader for this uneasy alliance between characters we care about in that mid-issue brawl between the Triceratons and the Purple Dragons. Artist Damian Couceiro draws one hell of an entrance for Casey and the Purple Dragons, but things gets supercharged when Hun shows up to fight along side his son.

I love how terse the writing his here, and it’s amazing to see Hun defer to his son’s leadership once the fight is over. Their alliance, possibly ill-conceived though it may be, is based on the actual conditions on the ground. Courceiro is able to demonstrate the reality of what they’re going through in a seven page punch-em-up in the middle of the issue, which literally takes place on a neighborhood basketball court. That’s the lived experience. Casey and Hun intrinsically understand each other’s goals, so their team-up gets an enthusiastic fist bump from me.

I’m much more trepidatious about all the other team-ups we get here. Neither Lawson nor Splinter really understand the man they’re supporting in Agent Bishop, nor do they understand what the actual threat against them is.