After a particularly difficult class period the other day, I found myself in the teacher’s lounge staring at a clock for several minutes. Another teacher came in at some point and commented on what I was doing. When I explained I was just enjoying the silence of the moment after my class, they completely understood. Teaching — or any stressful job — is like that. After moments of stress, it’s nice to just rest a moment and let everything sink in. The same goes for when your reading an exciting comic. After a momentous event, it’s nice when the creators give you a moment to breathe and process what just happened. Not sure what I’m talking about? Luckily, the excellent Infinity Countdown: Adam Warlock 1 provides a great example of what I mean.

Adam Warlock finds himself in the hands of Kang the Conqueror. Kang has resurrected Adam from his cocoon of life because he needs him to help defeat Thanos, who is trying to collect the Infinity Stones. After showing Adam around the future, Kang sends him back in time so he can capture the Soul Stone before Thanos gets his hands on it. It’s just after he does this that Kang meets his end, presumably at the hands of Thanos, an act that can be classified as nothing but heroic. It’s after this moment that creators Gerry Duggan and Michael Allred give us a moment to pause and reflect on Kang’s sacrifice. 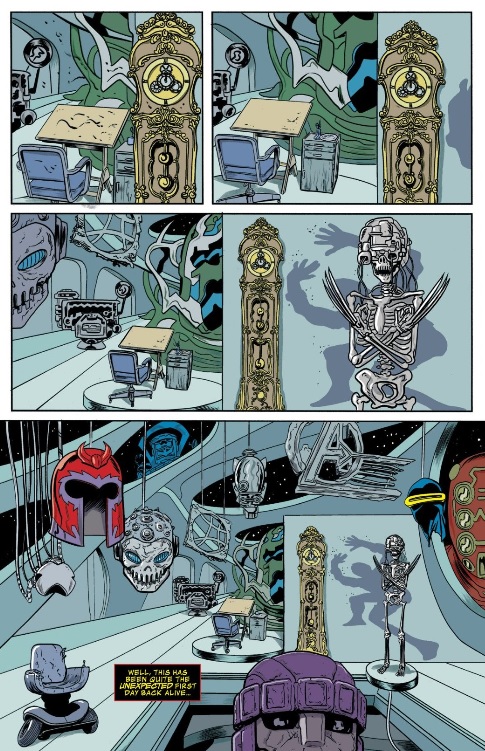 Duggan and Allred spend an entire page reflecting on Kang’s death. It would be so easy to overlook Kang’s death as just another casualty of trying to stop Thanos, but that’s not the case here. By letting this moment linger, Duggan and Allred ask us to pause and consider the cost of defeating Thanos and the heroic acts needed to stop him. This is a wonderful change of pace from many comics that treat the death of ancillary characters as nothing more than grist for the larger story being told. Here though, in this quiet moment after all the action, we’re asked to stop and reflect, and frankly, it’s beautiful.

Of course, this moment is made all the better by the way Allred suffuses it with deeper meaning in his artwork. As the camera pulls away from Kang’s desk with each panel, the silhouette capturing the moment of Kang’s death is revealed. The third panel, in which we first see Kang’s silhouette, also reveals a skeleton of some version of Wolverine (help me out here nerds!). The symbolism of this skeleton superimposed on Kang’s image is no mistake, as it shows that he is truly gone and now one of the dead. In this way, Kang has ironically become just another trophy in his own collection of vanquished heroes.