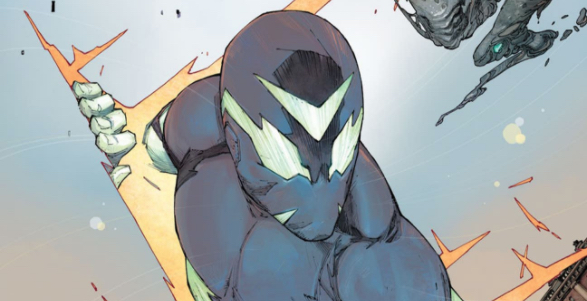 Kenneth Rocafort’s art is so packed with detail that shapes, lines and colors often find themselves marooned in the gutter and in the space between his panels. His visually noisy style gives the impression that Rocafort has so much creative energy that it simply cannot be contained by the incidents of the story he’s tasked with telling. As the rift-opening hero Sideways, Derek literally exists between spaces, and Rocafort is long practiced in filling those voids with exciting, vital details. Sideways 1 is marvelous introduction to a character I can’t wait to see more of.

And part of that is because the scripting team of Dan DiDio and Justin Jordan have done such a great job of anchoring this kid in the reality of a teenager in 2018. Or, at least, this is where I have to project my mid-thirties perspective onto the mind of a modern teenager, but everything feels pretty close to correct. If nothing else, Derek and Ernie live lives that are immediately recognizable as 2018 lives, without any of the yearing-for-a-time-before-cellphones shit that seems like comfortable ground for most creators. There’s a moment when Derek drops in on Ernie unannounced — y’know, like Batman or any other hero would — and she tells him if he ever stops by without a text first, she’ll kill him. You ever try to surprise-facetime someone? You’ll get the same response.

And while the writing sharply identifies these characters and the time they live in, it’s Rocafort detail that really sells it. Get a load of Ernie’s room.

It’s a modern geek shrine, with evidence of her crafting and cosplaying hobbies littering the panel. She’s also got one of those gaming chairs, and a heavy-duty headset in front of a gaming PC that’s almost certainly used for streaming. I love the detail of the desk lamp rigged up on the monitor acting as some “yeah, that’s good enough” lighting. It’s not super present in this panel, but she’s also got an out of control collection of Funko-esque toys, action figures, books, posters and other such memorabilia. Here’s the stunning part about all of this junk in Ernie’s room: I think it’s all original. Rocafort is obviously taking inspiration from well-known video games, anime series and comic books, but every overstuffed detail in Ernie’s shrine to her own nerdery is invented.

Of course, that’s just how Rocafort draws, as demonstrated later in the issue with a jaw dropping two page splash of Gotham City rendered in excruciating detail. 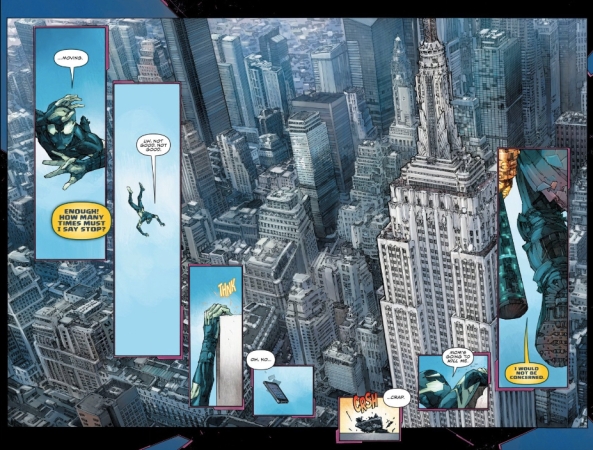 This feeds the emotional storytelling of the moment, inflicting a stomach-wrenching sense of vertigo on the reader. But it also sorta retroactively legitimizes Ernie’s room. The details of who these characters are and what they’re into are just as compelling as the queasy feeling you get in your gut when dangling 80 stories above city streets. Weirdly, that collapses all of the anti-social, social-media-obsessed behavior into a biological truth on par with a fear of heights. Derek wants his superhero live stream to be an honest, warts-and-all kind of affair, expressing an innate need to be seen and understood in a way he’s not IRL.