by Drew Baumgartner and Mark Mitchell 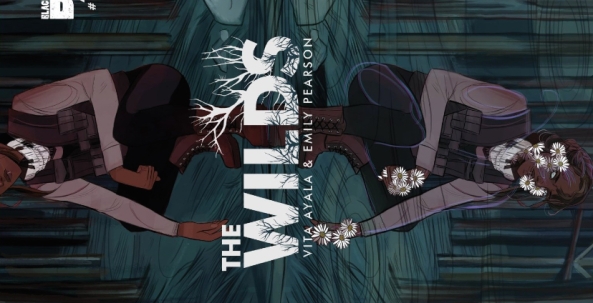 They might not have done so with elaborate ritual, since there has never been solid evidence that they included symbolic objects in graves, but it is clear that they did not just dump their dead with the rest of the trash to be picked over by hyenas and other scavengers.

Drew: What makes us human? As with any attempt to draw hard lines around a vague concept, there seem to be exceptions to every feature we might describe as human, forcing us to consider that other species might just qualify for whatever working definition we land on. Such is the case with Neanderthals — the “they” in the quote at the top of this piece — which display enough of what we understand as culture and morality for me to be satisfied with their humanity. But were their contemporary Homo sapiens? The trouble with that nebulous definition of humanity is that our gut tends to default to speciesism, especially in the moment. It’s easy for me to rule Neanderthals in now, but what about chimpanzees or dolphins? They have irrefutably human-like use of tools and language, but they just don’t feel human — they inspire a kind of visceral “this is an animal” feeling that requires a great deal of rational thought to overcome. That confusing, blurry line between human and non-human has long been a point of fascination for sci-fi writers, whether the non-human is a robot, alien, or some kind of mutated human, literalizing the struggle Homo sapiens seem to have in even recognizing the humanity of one another. This is far from the only intriguing theme in Vita Ayala and Emily Pearson’s The Wilds 1, but it might be the most unexpected.

The premise of the series is largely familiar — in the wake of some kind of global pandemic, humanity is scraping by, scavenging from the remains of society while dodging the free-roaming and dangerous infected. It’s The Walking Dead, but with a mysterious mutagenic disease in place of zombieism. And actually, the fact that these zombies might actually have a culture (hinted in that same reverence for the dead that leads me to call Neanderthals human) is also somewhat familiar; it’s the twist from I Am Legend, albeit delivered a bit more elegantly. But the clever part is that Ayala and Pearson reveal that information right off the bat. This isn’t a series about us discovering the humanity of the infected, but a series where we understand their humanity, even as we see our heroes murder them with a clean conscience.

Lest I lean on that theme too hard, I should acknowledge that the actual interactions with the infected are kept to a minimum in this issue. We see one character run from an infected, and later see our hero, Daisy, kill two to save a stranger, but that’s about it.

Instead, this issue seems most interested in Daisy’s sense of duty — a sense of duty everyone around her seems to think is totally overgrown. The first to suggest as much is Daisy’s longtime friend, Hank, who she still trades with in her role as “runner” — a kind of courier that ventures between settlements to keep them all supplied. 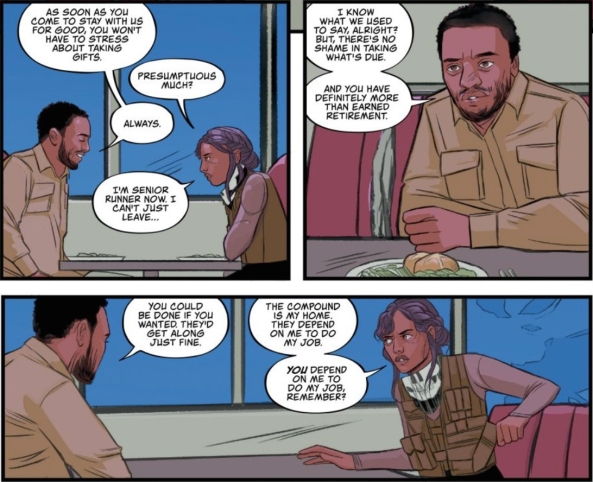 Daisy cuts the conversation short, but has to explain her position a bit more thoroughly when her girlfriend, Heather, brings it up later: 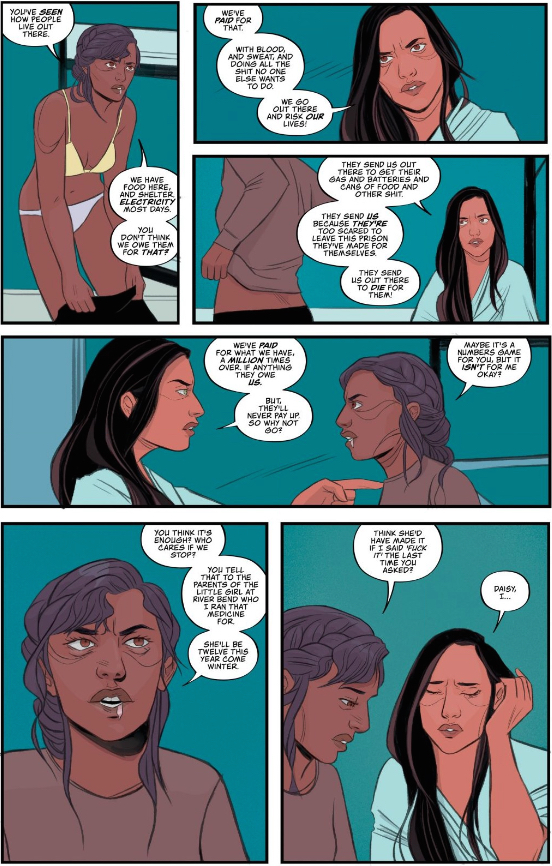 I mean: Daisy’s 100% in the right here, right? This isn’t some job that’s failing to pay her for overtime — it’s the survival of the human race. If she can save people’s lives, doesn’t she have a moral obligation to do so?

Both Hank and Heather criticize the working conditions of the compound, so it’s likely that there’s more to this equation than meets the eye, but it’s hard for me to justify the “let’s bug out because we can” attitude in light of the dire need of the few remaining people left on Earth. Again, I suspect it may make more sense as we learn about the nature of the compound, but all I’m seeing now is a straightforward parallel to charity or ally-ship — Hank and Heather don’t feel like they owe it to the citizens of the compound to help them, so would rather not. Daisy, on the other hand, recognizes that her ability to help bears a duty to help — classic Spider-Man power/responsibility stuff, but with two devils on Daisy’s shoulder framing it as an issue of inadequate compensation.

But as I said, I’m sure future issues will complicate that a bit. For now, the dramatic irony of our awareness of the “abominations'” humanity is enough to hook me in for another issue. Actually, the oblivious to the infecteds’ humanity creates a different (though not entirely unrelated) set of parallels to bigotry — whether we want to see them as a stand in for illegal immigrants, muslims, trans people, whatever. Which might just put Daisy in an interesting position; as I said, I’m reading her as an ally, but while she’s eager to help, she may still be sleeping on who actually needs her help. Her duty to humanity simply needs to adjust its definition of “humanity.”

Mark, I guess my takeaway is that there’s some rich thematic soil here, though Ayala and Pearson only just manage to sow the seeds in this issue. Are you as excited for the possibilities as I am, or would you have preferred to see some of these ideas developed a bit further by issue end?

Mark: Drew, where do you find all of these fabulous quotes?

But, yes, I do wish that the more intriguing elements of The Wilds had been pushed further in this debut issue. As is, The Wilds 1 is a bit too rote for me to enthusiastically recommend.

What we see in The Wilds 1 checks all of the boxes of apocalyptic zombie fiction, but in a post-The Walking Dead world there needs to be some sort of subversion of the genre to stand out. It’s true that the moral choice here is probably for Daisy to stay and help the Compound as a Runner for as long as possible, but I don’t require characters to make the right choices, just interesting ones. Daisy actually deciding to leave with Heather to live a quiet life in the Dry Lands, and following the ramifications of that choice, would at least be more unique. Then, if she later decided to return to the Compound, wouldn’t that choice be more meaningful after we have an understanding of the life she’d be sacrificing in doing so? As is, Daisy is defined by her unwavering heroism, which renders her as mostly flat.

And that flat characterization is kind of a problem across the board in the The Wilds 1. Go back and watch the pilot for 30 Rock and you’ll see how effectively that show set up our understanding of the dynamics between characters. Each time a character is introduced they’re given the opportunity to play their “game” — Jenna is a delusional starlet, Tracy is like a kid with money, Kenneth is the eternal optimist, etc. You can identify who these characters are in their first few minutes on screen. Contrast that with the various characters we meet in The Wilds 1, where the only thing I can say with complete confidence is that Mac likes cars. 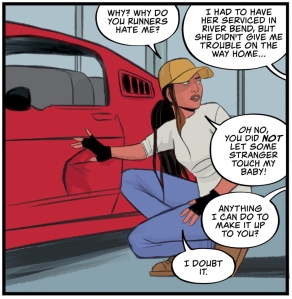 Still, there is real possibility in the idea that the infected are more feeling and more conscious than we’re used to in zombie fiction. The cover of the issue is certainly playing with the idea of there being some sort of symmetry between the infected and the survivors (and we all know how accurately comic book covers represent an issue’s contents, right???), but if that’s Ayala and Pearson’s intention moving forward, I wish it would have been lampshaded a bit more in this first issue.

In the end, I guess the distinction I’m making is that I feel like a story with all of these elements could eventually lead to somewhere exciting, but I’m less confident that this specific execution of these elements will.

2 comments on “The Wilds 1: Discussion”