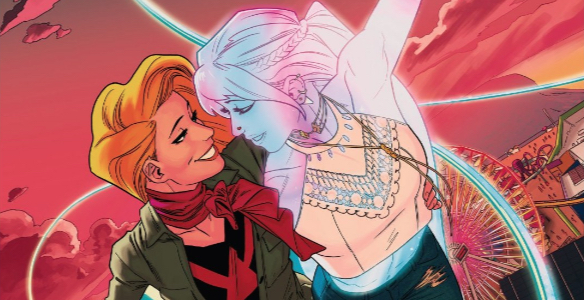 “My advice is: stand firm for what you believe in, until and unless logic and experience prove you wrong.”

Daria, Is It College Yet?

One major advantage of growing up and getting older is experience. Being young means screwing up (a lot), but every screw up teaches you something new, hopefully helping you avoid similar mistakes in the future. That’s only if you take those screw-ups to heart, though. That seems to be a problem for the Runaways (and even for the visiting Julie Powers) in Rainbow Rowell and Kris Anka’s Runaways 8 — they’re so busy holding on to what they once were that they can’t see how badly they need to grow. They can’t learn from their own mistakes.

It’s easy to see why they might hold on to their little family so firmly — not only have they just reunited, but Gert was dead for so long that having her back probably seems like the perfect opportunity to return to a life they thought they’d never get back. Gert’s death, though, demonstrates exactly why they need to change, as Julie so tragically points out.

As a part of the Power Pack — a group of superpowered siblings who are equally a family and a superhero team — Julie is uniquely qualified to advise the Runaways in this area. The Runaways have never considered themselves superheroes or a team, of course, but that hasn’t stopped them from getting caught up in life-or-death situations dozens of times. Gert died, and even if she was brought back, that doesn’t mean they can keep hiding their heads in the sand and pretending they don’t need to take precautions. Experience has already proven them wrong, they just don’t want to admit that they need to change because it would upend their whole dynamic, and that kind of change can be scary.

Even Julie herself isn’t immune to that kind of fear. The return of the Runaways means that Julie isn’t the most important person in Karolina’s life anymore, and that change has her nervous, and nostalgic for the life she once lead. 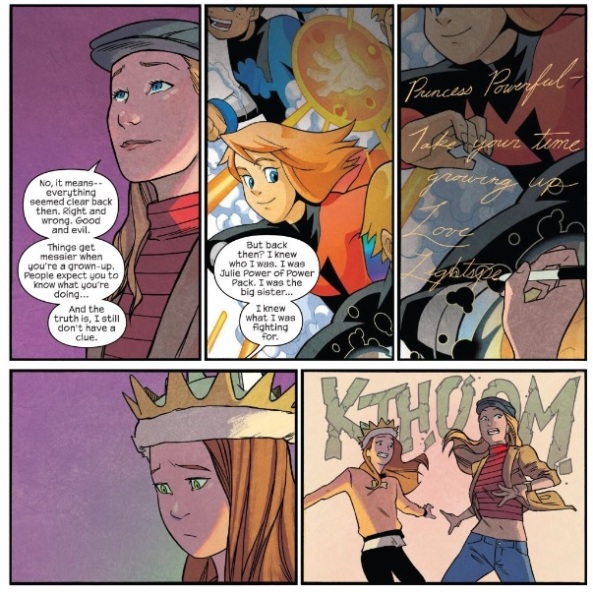 I think we’ve probably all given kids advice like this before. I think we get nostalgic for simpler times, and we don’t want to see kids grow up too fast and not take advantage of their freedom, but I also think when we tell them things like this we make growing up seem scarier than we should. Julie obviously doesn’t know that Molly is quite literally grappling with deciding whether or not to grow up (her eternally-thirteen friend Abigail has offered Molly eternal youth), but she does know that great things can happen when you get older too. Change can be scary, but it also means great things like independence, like falling in love, like learning and growing and finding out just what kind of person, exactly, you want to be. That kind of experience should be something we all pass along, be it to kids Molly’s age, or even young adults like Julie, Karolina, Chase, and Nico. Every member of this team is grappling with a fear of change, when really they only option they have is to embrace it.

One comment on “(Not) Learning from Experience in Runaways 8”