A lot of Mister Miracle stands on the foundation of process and repetition. The nine-panel grid is established early and repeated on every page. All nine panels will be committed to a single action. Then the next nine panels are committed to a different action. This repetition leads to the feeling of being trapped, both for Scott Free and for the reader. But issue 8 finds writer Tom King introducing a sort of rosetta stone for how to find joy and contentment in the inescapable repetition. “Hush, Little Baby.”

I’m sure you’re familiar with the lullaby itself. I don’t know why this is one of those songs that everyone knows, but it is. When King and artist Mitch Gerads introduce the song to the issue, they do everything they can to stay out of the way of the lyrics. Except for the distortion on the seventh panel, every single one of these images is exactly the same.

Even the way King splits up Scott’s speech balloons favors readability over anything else: each panel gets its own phrase of song. For as much as the rest of the issue cuts back and forth between the “work” and “home” life of Mister Miracle, with little regard for the reader’s ability to follow, these recurrent lyrics are as clear as crystal.

And seriously, some of the other stuff is hard to get a handle on. This is especially true on the battlefield, which is usually a wash of swords, lasers and demon corpses. There’s one scene on Apokolips where Scott tries to assert his authority over his second in command, only to have that authority challenged. Then… well, I’m not totally sure what happens. 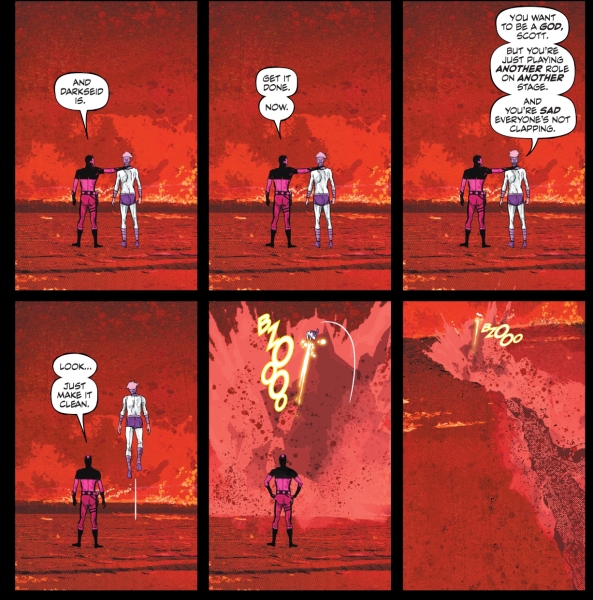 That should be, like, an obvious interaction, right? But Scott’s role here isn’t totally understood — not by him, not by Barda, not by his own troops and not by his enemies. His role at home on the other hand is understandable. He’s a provider. He tries to provide one thing — a crib with no toys in it — and if it doesn’t work, he tries something else — a carseat in his bedroom. That’s the recurring beat in the book: provide, fail, provide again. We’ve used previous discussions of Mister Miracle to debate whether Scott’s marriage and family are the one trap Mister Miracle can never escape, but I’m starting to suspect King is illustrating that not all traps should be escaped.

The most effective rhetorical turn in the issue is Scott punch-drunkenly singing “Hush Little Baby” to himself as he staggers off the battlefield. On the other end of the phone is his son saying “Dah! Dah!” for the first time. Of course, that dovetails perfectly with the part of the song that starts a new verse: “Daddy’s gonna buy you a…” whatever. The trap isn’t one that defeats him, but one that renews him.