Remove everything that has no relevance to the story. If you say in the first chapter that there is a rifle hanging on the wall, in the second or third chapter it absolutely must go off. If it’s not going to be fired, it shouldn’t be hanging there.

Drew: Chekhov’s gun has parallels in virtually every artform (at least in aesthetics that value clarity); whether it’s a brushstroke in illustration, a word in prose, or a note in music, if it doesn’t have an explicit purpose, it shouldn’t be there. But, of course, our knowledge of this principle lends a sense of foreshadowing to every object, character, or concept that is introduced in a narrative (again, if we can assume the narrative is playing by Chekhov’s rules). But because narratives are driven by drama (that is, difficulties for the protagonist), Chekhov’s gun mostly applies to things that can somehow harm or disrupt the characters’ lives — there’s a reason it’s not called “Chekhov’s birthday present.” Which creates very different expectations for things going right and wrong — things going wrong are far more likely to be introduced ahead of time (per Chekhov’s rules), while the drama of things going right is left best to the last possible moment. In that way, narratives reflect our own experience of reality, where we’ve given the name “Murphy’s law” to the notion that things will go wrong if they can, but no similar expectation for things going right. That is, we expect things to go wrong, so things going right is always a pleasant surprise. Or, as Lou Pirlo puts it in Moonshine 10, “God works in mysterious ways,” but “Old Lucifer…he was direct.”

That’s about as Brian Azzarello-y as a character’s worldview can get, but as I’ve already suggested, it’s maybe the neutral position for both the real world and narratives alike. Things working out has to be a surprise, but things going wrong has a clawing sense of inevitability. Heaven knows that’s the way Moonshine has operated from the start, with its first arc building to a frenzied, balletic melee, and this second arc building towards a potentially even more violent confrontation.

In the meantime, everyone is still recovering from the last fight. For the Holt clan, that means mourning the loss of Enos. 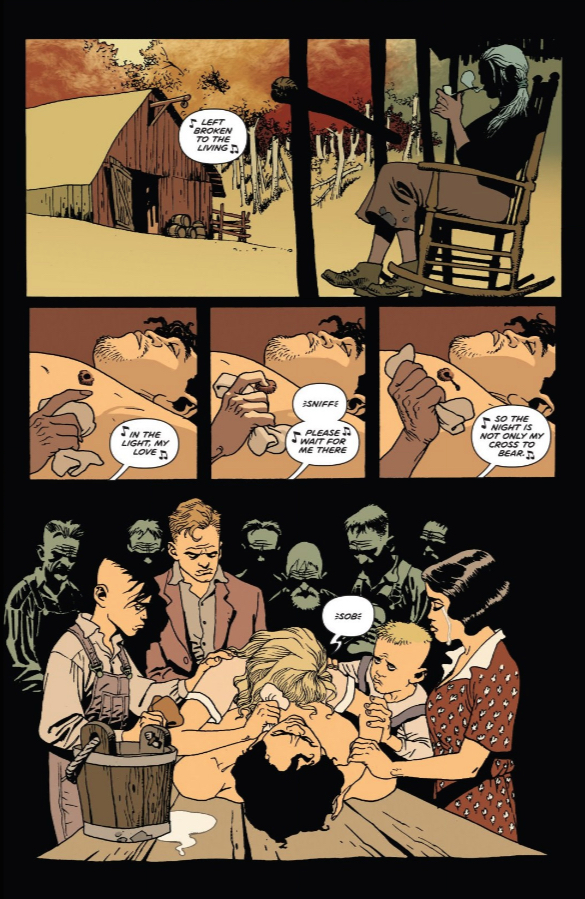 It’s a moving, somber moment, but the most striking image from this sequence isn’t Tempest breaking down or her family standing by — it’s Mama Holt silently plotting her revenge. Or, at least, that’s what I’m projecting on to her separating herself from this scene. The rest of her family is licking their wounds, but she doesn’t seem as preoccupied with what she’s lost. She’s obviously going to try to rescue Hiram at some point, and I have to imagine she’s already figuring out how she’s going to do that.

Speaking of Hiram, we finally get to check in with him as L’Ago’s prisoner, and it’s clear things aren’t going great for him. And it’s also clear that L’Ago is still fixated on eternal youth. As Lou says at the start of the issue: the devil is direct. So Eduardo Risso draws that scene with similar directness. Risso’s use of shadow later in the scene is brilliant, but in terms of directness, I would be remiss in failing to highlight how he introduces the scene:

We open with matching closeups of L’Ago and Hiram before pulling out to a full shot that establishes their relation in space — we now understand the scene perfectly. Then, Risso switches us back to matching closeups, this time of the characters’ feet. Hiram’s are bare, demonstrating both his poverty and powerless in comparison to L’Ago’s two-tone wingtips. But, of course, Hiram’s position of powerless also puts him in the perfect spot for spitting on those wingtips. Maybe the devil’s directness is the same thing as God’s mysterious ways.

Which is maybe the takeaway of this issue? That setbacks are also opportunities? Even when Lou is describing God’s “mysterious ways,” he’s admitting that it looks pretty indistinguishable from misery. That is, people only mention those mysterious ways when it looks most like God is absent. For Lou, that was his mother and sister’s deaths and his father’s abuse — the kinds of things its hard to defend as anything other than some mysterious master plan. You know, unless it’s the devil’s plan, in which case it’s much more direct.

Patrick, I’d say it’s fair to think Azzarello and Risso are acting more like the devil here, at least for now, but I’m curious to hear your take. I’m also excited to hear how you think Lou’s story fits in with all of this, whether his flashback, is delusions, or his misadventures on the chain gang. Are these unequivocal, direct bad things, or secret, mysterious good ones?

Patrick: But Drew! There’s a third option illuminated by the ghost of Fat Tony. 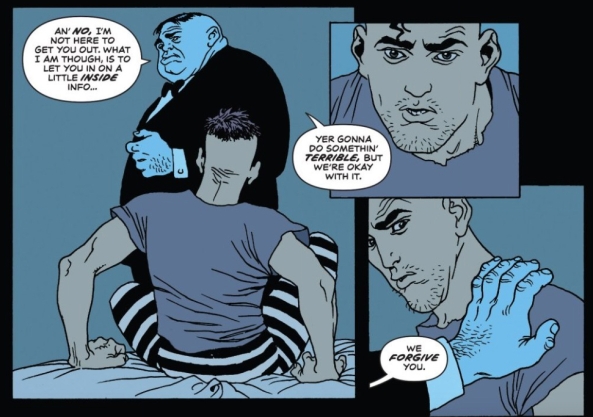 I think you’re totally right to lean into the narration on the first couple pages as a kind of key for the rest of the issue, but you’re missing out on the Pirlo part of the equation. Lou is given permission by Ghost Fat Tony to “do somethin’ terrible” and still be absolved. That’s a power that’s granted to neither God nor Devil, and is ultimately at the heart of the morality of this series. Lou Pirlo has a choice in how to handle himself, and this issue shows him actively making that choice.

The other actors aren’t afforded the same ambiguity. L’Ago, as he lords over the beaten body of his foe, is all devil, while the Holts’ mourning their fallen brother are all God. I trust Drew steered away from discussing Lou’s behavior in this issue because it’s fucking weird, and hard to pin down. Azzarello and Risso do not give us any clues into Lou’s thought process either — all that “mysterious ways” quietly bounces around the readers head without actually being reinforced in the the text. After spending so much time plugged into Lou’s perspective, it’s sorta disarming to not have any idea what — if anything — he’s planning here. The moment he screams out for Belle, I’m left making the same face as other inmates.

What is Lou experiencing here? Does he actually see his sister or is it an act he’s putting on to bewilder his captors and help his fellow prisoners? And, practically, what’s the difference? The lie ends up being more compelling than their reality, and Lou is given two full ladles of water, one that he drinks and one that he shares. Later at the dining hall, Lou pulls a Hook and imagines a fantastic feast in place of the…whatever it is they’re feeding these poor guys. Somehow, the strength of Lou’s fiction beats out the reality of the situation. The guys are all pretending to pass the butter to melt on their steaks, instead of choking down the same putrid slop for the hundredth time.

And that’s actually a different Chekovian gun: Azzarello plants the seeds of this food’s nastiness early in Lou’s story. Drew mentioned that modern readers tend to look at everything as potential foreshadowing, but there are a lot of ways storytellers attempt to hide that fact. It sure looks like what’s important in this scene is the casual cruelty of Boss Dirt, but the real takeaway is that the food is gross. We’re basically being prepped for Lou’s miracle of turning water into wine.

That’s my takeaway. While the other big wheels in this story are locked in a battle between heaven and hell, Lou represents the multitudes who suffer in their wake. I mean, hell, we’ve already seen him die for their sins, right? The issue ends with Lou baring his fangs, presumably right on the edge of transformation and what’s exciting about that is that I have no idea how he’s going to use this power? Does he free his friends? Or just murder everyone and run away? Does he join the fight between the Holts and L’Ago? And on which side? He’s got a choice, and that makes him the most interesting character in this series.