by Mark Mitchell and Ryan Mogge

Mark: It’s pretty insane that we choose which college we’re going to attend based on almost zero context. Sure, you can take a campus tour, read about the experiences of alumni, and maybe even shadow a current student for a day or two, but in the end choosing a college — any college — is an immense leap of faith. This seems to be doubly true of attending Blackwood College, the eponymous school of the occult in Evan Dorkin and Veronica Fish’s Blackwood 1, as none of the students we meet in this premiere issue seem to have much understanding of what they’ve signed up for.

Here’s what we know: a dark, mysterious force has been accidentally summoned by Blackwood’s dean, Howard Ogden, and its sinister effects are beginning to permeate the school. It’s unfortunate timing for the forces of evil to encroach on the college, since a busload of freshman just arrived and are trying to adjust to college life. 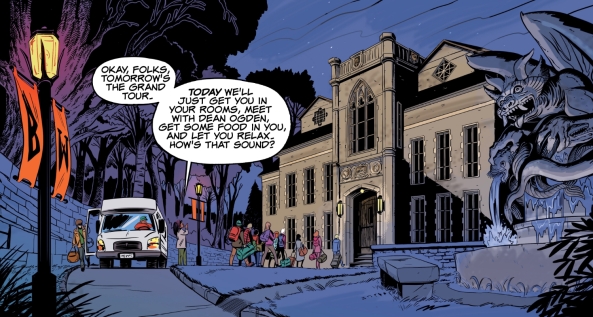 The students are a regular band of thinly sketched misfits: Stephen has an eyepatch, Dennis rocks a red vest, and Reiko is…well, we know for sure she’s Asian. Maybe her other characteristics are being saved for a dramatic reveal in a future issue. Wren, looking very Mary Stuart Masterson in Some Kind of Wonderful, is the most well-shaded character in the issue (we learn that she witnessed the horrific deaths of her friends and then fell into a coma), but, confusingly, she acts like she’s attending Blackwood against her will. Of the students we meet, only Leslie, the Hermoine-esque character, seems the least bit enthused about attending Blackwood. Everyone else is indifferent, angry, or baffled that they’re even there. Stephen was a terrible student that Blackwood recruited and gave a scholarship — why?

It makes me nervous that Blackwood is only planned as a four-part miniseries. Based on Blackwood 1, I’m worried that the amibition of the story is too much for such a limited run. In a post-Harry Potter world, there’s some amount of built-in goodwill towards the idea of a magic school existing in the real world, but Blackwood College is too unlike Hogwarts to offer almost no explanation as to its existence or operation.

These questions are not in and of themselves problematic; if Blackwood was solicited as an ongoing monthly series Dorkin would have plenty of time to answer these questions. In pre-release interviews Dorkin describes Blackwood as inspired by horror comedies of the 1970’s/80’s, and the issue would have benefited from leaning more into the archetypes B-movies generally employ with abandon. But as 1/4th of the entire story, Blackwood 1 doesn’t give readers the necessary context to properly invest in its world, and as the story barrels forward, it’s unlikely there will be time in the future for that work to be done. Blackwood is fun, but I’m skeptical its story can ever be satisfying.

That said, Fish’s art (with layouts and lettering by Andy Fish) does a lot of heavy lifting this issue by evoking the atmosphere of a crisp, slightly sinister autumn afternoon. Reiko’s first appearance is particularly striking — standing behind Wren on the Blackwood train station platform, her coat billowing in the wind, an ominous missing person poster tacked to one of the station’s support beams and the dark woods and mountains rising behind her. It’s too bad the character never lives up to the power of our initial impression.

Ryan M: I think that the intro to Blackwood was a little more effective for me. While I agree that there is a lot for Dorkin and Fish to do in the next three issues to ensure a satisfying arc, they built goodwill with me from panel one.

I love the details here, from the pills spilling from their bottles to the crusty coffee on the lip of a Blackwood mug, to my favorite bit: a desktop calendar with “DOOM” written on every day of the month. The story starts off both ominous and a little goofy, establishing the vibe of Blackwood in advance of any of our protagonists getting to campus. The hoary use of a tape-recorder monologue only adds to the fun. By the time, the Dean falls over his desk in his death throes, the tone of a college with terrible secrets is established. It’s enough to chew on, especially paired with the first of Wren’s nightmares.

It’s in the nightmare that Dorkin and Fish tell us exactly who to care about, and thank God it isn’t Leslie. Our crew of weirdos are all a little damaged, and where better to start when pulling together your team to fight big evil? Though it looks like this four is a second draft of the lineup. What happened to the other Oyuki?

As we start to focus on our four, Fish portrays both their youthful angst and small attempts to connect. Those moments are interrupted by genuinely horrific moments. There is a visceral intensity of both the nightmares and the Lovecraftian monster protruding from the Dean’s back. It’s another element that evokes the gorey practical effects of an 80’s horror flick.

Mark, you are right that Wren is the most fleshed out of our protagonists. It’s interesting that she also is the only one to make a real attack move against the Dean-Monster. Her tree limb staking only frees one of the boys, but she was the member of the crew to land a hit at all. There is a lot to know about the rest of the characters and the world, but Dorkin and Fish have been very efficient with story in this issue.