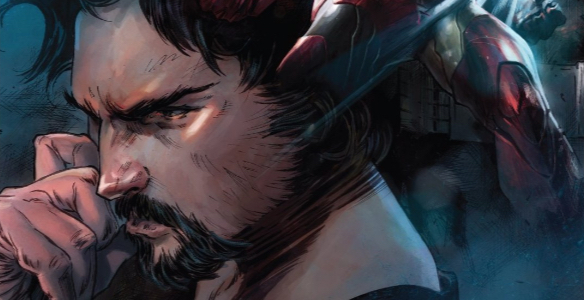 Tony Stark is a selfish jerk. It’s one of the things we like best about him! But there’s no denying that his success as Iron Man is contingent on the hard, capable work of thousands of employees, and countless robots and A.I. systems. As writer Dan Slott and artist Valerio Schiti take the Iron reins, they pitch Iron Man as a team venture, while casually undermining the autonomy of every individual on the team. Aside, of course, from Tony Stark. Tony remains a singular genius, more of a puppeteer than a team leader.

The climax of the issue involves new Stark Unlimited acquisition Andy Bhang synchronizing Tony’s sentient micro bots with an idea Tony had in a flashback 25 years ago. Is Andy really contributing that idea or does it just belong to teenage Tony Stark? Or consider that the only reason anyone knows that they should be looking around inside Fin Fang Foom’s body is because Tony identified him as behaving differently. Rhodey even kinda gives him shit for pointing out that ol’ Foomy ain’t himself. And the resolution of FFF acting strangely is that he is being remote controlled by some mysterious technology.

And once that brain-controlling disc is destroyed, FFF stomps off in a huff, saying “Fin Fang Foom is no one’s puppet, pawn or plaything.”

Which is what all of this is about: how does one control others? By buying out their company? By insisting that they’re free to make their own decisions? By playing an undeniable beat? Y’can’t fool me, fellahs, the name of this series is Tony Stark: Iron Man, emphasizing the man before the idea. Tony may stand on stage with his whole team at the end of the issue, but Schiti gives us a quick flash into Tony’s imagination, and possibly his true feelings on all of this.

Is that a team of people behind him? Or just the (mostly-)flesh cogs in the Iron Man machine? There might not be an “i” in team, but there’s a big one in “Iron Man.” And it comes first.