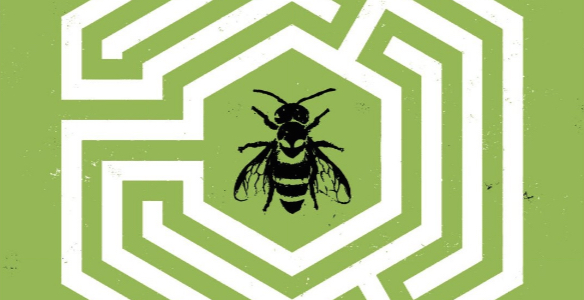 Drew: Like a lot of people, I was deeply resistant to the concept of symbolism in my high school English classes. I don’t know if I resented this new (to me) world of symbols that I was so bad at identifying, or if I just lacked the imagination to conceive of writers having more literary tastes and aspirations than 15-year-old me, but I was incredulous that symbolism even existed in the works I was reading. My teacher was reading way too much into things (because, I reasoned, making things overcomplicated and boring was her job), and that no writer actually intended for these images to have any non-literal meaning. But my fixation on intent blinded me to the much more complex world of who was observing the symbolism. Is it just me, the reader, or are the characters themselves ascribing deeper meanings to the objects and actions around them? Or what if it’s the narrator, conjuring some kind of coherent aesthetic for the narrative as a whole? Perhaps it’s not the “writer,” but some diegetic force crafting these symbols, perhaps as clues to their motives or intentions? These are all questions wish I could go back to my teen self and ask, but honestly, I might be better off handing him a copy of Ann Nocenti and David Aja’s The Seeds 1, which interweaves all of these modes of symbolism with breathtaking ease.

Some of those symbols are more obvious than others, but the most striking are the visual motifs that crop up again and again. The earliest example are the hexagons which Nocenti and Aja use to give their first page a telescoping sense of scale: 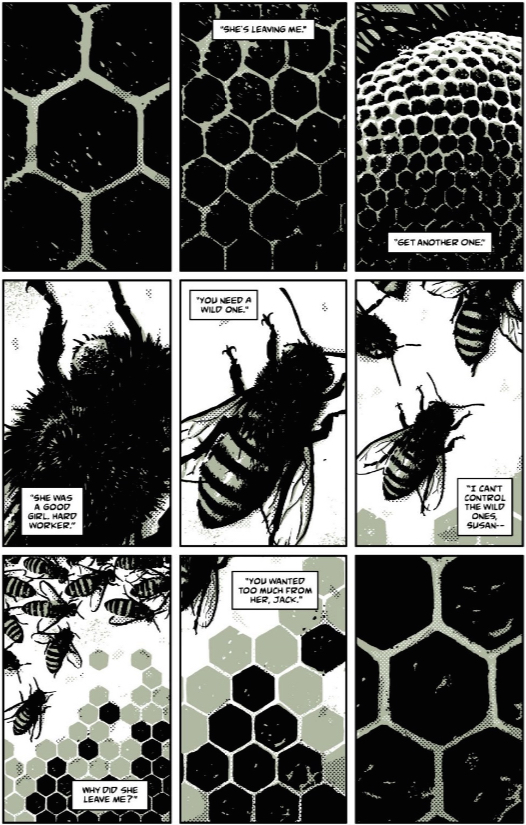 That final hexagon is echoed on the next page in a Watchmen-ian match-cut. And loath as I am to hold up any new work against Watchmen, the comparison seems particularly apt here. Nine-panel grids and match-cuts are ubiquitous enough that the parallels might seem a bit shallow, but I’m almost certain Aja is making a direct allusion when he renders a pair of lovers as a almost symmetrical pair of silhouettes: 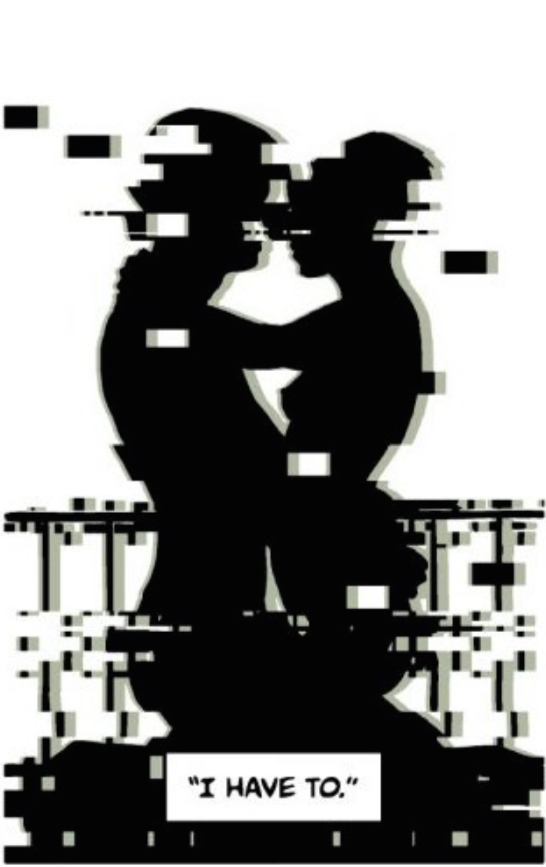 Off the top of my head, I remember very similar images depicting both Walter Kovacs’ mother with a random john AND Dan and Laurie, and both times it was used in a match cut. Aja does eventually use this image for a match cut, but not before zooming in and allowing it to progress a bit, making for a much more surprising and striking cut when the colors invert. Here are both panels, side by side:

That might be a symbol meant just for folks who recognized the Watchmen allusion, but it seems to be assuring us this isn’t merely derivative imitation — Nocenti and Aja may be using some of the same tools as Watchmen, but they’re taking them in different directions.

My favorite example of the unique visual vocabulary of this series is when Aja buries what might otherwise work as match cuts in the middle of a scene. Check out the first panels of these non-adjacent pages:

To me, those moments start to hint at some kind of unified world here. I don’t yet know if that unification is a simple aesthetic choice, or indicative of some force within the world of this series, but it’s certainly intriguing, and carried off with enough craft and subtlety to keep it from going stale.

A similar choice on the writing side is the use of “b” words as chapter titles: “Barrier,” “Bodies,” “Bullpen,” “Break,” “Bees, Bugs, & Brushes,” and “Bar.” “B”s are obviously important diegetically, as well, recalling both the technology-free “B Zone,” and the bees we see throughout the issue. We don’t yet have a broader meaning or purpose we can ascribe to all of those “B”s, but I suspect that has a lot to do with how little we know about what exactly is going on here. Nocenti and Aja craft a richly textured world in this first issue, but it’s one that is very much defined by its mystery. I was already intrigued by the themes of technology, truth, and fear, even before they introduced what might be literal aliens. This seems like a series very much designed for our time.

Patrick, I’m obviously excited about this issue, and can’t wait to hear what you thought about it. There’s so much going on here, I barely mentioned the narrative itself. Are you intrigued by this world? Did you connect with any of these characters? Or, heck, feel free to just comment on whatever other symbols I didn’t cover — there’s so much to talk about!

Patrick: Drew, I love your obsession with the symbolism in this issue. I think that’s nicely echoed by the quote aliens un-quote within the narrative itself. As Race returns to his side of the wall, we start to get hints of that obsession, at first without context, and then with the confirmation that there are real flesh and blood people/aliens/collections-of-bees-in-a-man-suits that are voraciously lapping up an abstract representation of alien life. Here are the panels I’m referring to.

There’s some kind of TV show these guys are watching with a cartoon alien running around and zapping dudes with his laser and making 80s-sitcom caliber jokes. Seemingly, this one dude just fucking loves it, repeating his favorite lines back to the TV. These four panels aren’t all on the same page (the second and third are on the same page, but otherwise, they’re all on adjacent pages). But they do all share a common location on the page. They’re all in the middle column on the page, and in the case of the first three panels, they’re littered among the story of Race returning home.

It’s a stark juxtaposition — a fun cartoony alien friend against a backdrop of urban ruin.

Aja and Nocenti are building the case for why anyone would choose the symbolic over the literal. Even if the abstraction is trite to the point of using a “stick a fork in it (it’s done)” joke, it still beats the broken down reality you’ve got to trudge through every day. At this moment–right before the page turn–it almost seems like an argument for escapism. Hey, if the sidewalks are crumbling beneath you and cows have wandered onto the streets, at least you can still get a chuckle out of a cartoon, right?

Upon turning the page, Aja and Nocenti make their stance pretty transparent: subjecting oneself to endless symbolism, distraction, and abstraction is toxic. Cue Aja with a crash course in toxicity:

Oh, good: a braindead drone wielding a gun and flashing his dick in front of an American flag. That’s our introduction to the alien lair, where we finally start to get some actual details about what’s going on in this world. Surprise, the details are ugly. Humans are doomed, and these guys are collecting samples. Oh and if you piss off the boss, he’ll blast the TV.

That’s all scary stuff, and Nocenti and Aja are playing with just enough casual nudity and violence to make me squirm. But it’s not exactly like our human characters have a healthy relationship with symbols either. There’s this scene between Astra and her editor where Aja insists on showing us panels zoomed in on the posters and clippings on the wall. We’re getting some insight into the world, but we’re also seeing this repeated image of the circle with the line through it.

Gabriel’s secretary also sets up this scene by saying “can’t smoke in here.” That, coupled with these signs are are clearly evocative of ‘no smoking’ signs, stands in contrast to these two puffing their lungs out.

So it’s a fascinating set of priorities. One side can’t abide the symbols, even when they’re protecting them, and the other is distracted and warped by them. I think Drew’s right to say that for as dense as this symbolism is to the reader, it might actually be more meaningful to the characters.

2 comments on “The Seeds 1: Discussion”