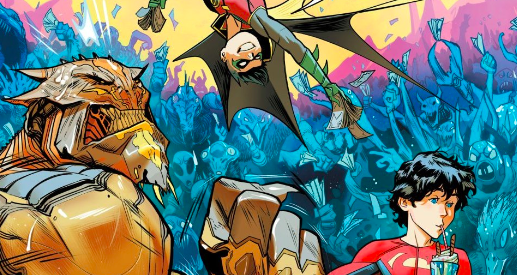 When Pete Tomasi began pairing Jon Kent with Damian Wayne back in the pages of Superman, their dynamic was immediately successful. The pair emulated their fathers in a way that previous Superboy/Robin duos never could, with Damian having Batman’s brooding and Jon having Superman’s pluck. But what happens with you throw another Jon Kent into the mix?

The Super Sons are in the midst of fighting “The Gang” – a Legion of Doom-inspired set of alien kid cosplayers – when Jon is exposed to red kryptonite, splitting him into two separate Superboys. You might think that this split would divide Jon’s traits and powers between the two, but mostly it brings the boy’s inner turmoil to the surface.

From the minute he is split in two Jon is literally at odds with himself. You could argue that Superboys Blue and Red are the physical manifestation of Jon’s self-confidence and self-doubt. When the two are arguing and heat-visioning each other’s butts it’s Jon being overly critical of himself. When they decide to stop fighting each other and work as a team it’s Jon putting his doubts aside and embracing his inner hero.

Carlo Barberi gives the two Superboys even space within the pages of Adventures of the Super Sons 3. If there is a solo panel dedicated to Superboy Red, Barberi will respond in kind by giving the next panel to Superboy Blue.

That notion of balance is at the heart of Adventures of the Super Sons 3. As The Gang’s ship is crashing towards the planet’s surface, the two Superboys rush in to save the day. They achieve this by using their yin and yang to their advantage: a little push and pull to keep Jon (and the ship) centered.

Though they spend the majority of the issue opposing each other in some way, the two Superboys ultimately agree on their feelings towards Robin. While Tomasi is throwing some high-concept split metaphors at us, he doesn’t forget what makes this series work: the love/hate relationship between The Boy Wonder and The Boy of Steel.