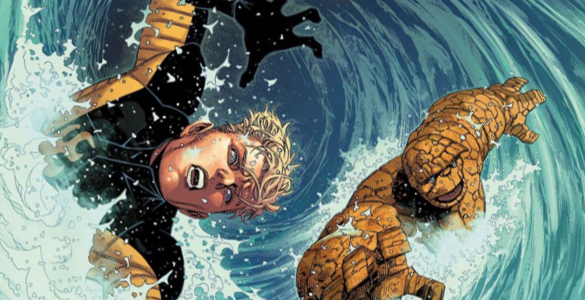 Marvel Two-in-One 3 is all about characters either rediscovering or redefining their relationship to their super powers. Our titular pair of marvels even goes to doctor Rachina Koul in the middle of nowhere Wyoming to jump-start Johnny’s powers. Ben describes Johnny as “broken” and whether that’s just referring to his ability to flame on, or more holistically applies to the man is left up to the reader’s discretion. But the implication is clear: without their defined roles as superheroes and supervillains, these guys just don’t know how to function. The damn Mad Thinker is going so crazy he’s styled his facial hair to look like Reed Richards and claiming to launch a “New Fantastic Four.” Basically: everyone goes nuts without boundaries. Today, I want to explore how lettering emphasizes the connection between a character, their powers, and how they view themselves in this universe. END_OF_DOCUMENT_TOKEN_TO_BE_REPLACED

Shelby: The Hulk is not a complex character. He exists as rage incarnate, smashing his way through everything in his path, and basically unstoppable once he gets started. There’s no ulterior motive, no hidden agenda, no personality, just smashsmashsmash. He makes for some sweet action sequences, but that’s about it. The Hulk gets interesting when you consider his relationship with Bruce Banner. Because Banner can basically turn into a nuclear bomb at any moment, he doesn’t exactly get invited to a lot of backyard barbecues; his life has been spent in isolation, desperately seeking a cure for his chronic Hulk-itis. Mark Waid has decided enough is enough for sad science Banner, and is pointing both Banner and the Hulk in a whole new direction.
END_OF_DOCUMENT_TOKEN_TO_BE_REPLACED