Peter: Okay, I like a good team book as much as the next person. It allows for interesting character interaction on a regular basis. It also gives me the feeling that there are clearly some things that no one superhero can take down on their own. That’s how this Justice League came together; no individual could defeat Darkseid. They were brought together by fate — and Fatherboxes — to defeat evil. Now, we’ve jumped ahead to present day, the origins are long gone, and now we get a taste of the current Justice League. But why does it taste funny?

This issue starts with Spore monsters attacking people in Baltimore. The Advanced Research Group Uniting Super Humans, henceforth referred to as ARGUS, is responding, and getting bugged by civilians as to why the Justice League isn’t there helping. On cue, BOOOOM, the Justice League appears, and those whiny civilians are elated with their presence. The JL fights the monsters, then has a quick intel meeting, complete with Green Lantern umbrellas. Batman starts to lay out a plan but GL and Flash head off on their own, ignoring anything Batman has said. They then encounter Papa Spore (and more Spore Monsters) in the act of attacking Papa Spore’s ex-wife. The rest of the League shows up, and they beat him up.

Flash forward 1 hour, and Colonel Steve Trevor, the man with two first names, and the head(?) of ARGUS is giving a press conference about the events, and he gets riled up by the press doing what it does. We then see Steve in a meeting with several US Congressmen and women, and they express their doubt in Trevor’s ability due to his potential ‘involvement’ with Wonder Woman, and their overall lack of trust in the Justice League and ARGUS. But Steve takes them all to school. Colonel Trevor hops on his computer and starts up a video conference with the Watchtower, and begins to talk to Wonder Women, but they are interrupted but mindless bickering between Batman and Green Lantern which then into a complaint-fest for the Justice League to unload a bunch of stuff onto Colonel Trevor. We learn why Steve Trevor does what he does, and after he signs off his video com, we learn that he clearly had his heart broken by Diana. We then cut to the narrator continuing his story, as we discover that it is none other than David Graves, who literally wrote the book on the Justice League. He clearly has had a change of heart about them, as it is revealed that he has stolen the Orb of Ra and now knows exactly how to beat the League…Steve Trevor.

This is our first issue of a present day Justice League, and in the grand scheme of things, it doesn’t feel connected to the rest of the new DC Universe at all. This issues raises several questions, like how does Hal have a ring and use it, if Sinestro controls Hal’s ring? Or — and I’m sure this is Patrick’s big question — where are the owls??? But really I don’t have a problem with most of these things, and have decided to read Justice League as if it were a completely different setting away from the rest of the Universe.

The best part of this book is Steve Trevor. Colonel Trevor is clearly the hero of this issue, and is in more panels than the entire Justice League. We get to witness gods among men through the eyes of Trevor in Justice League #7. What’s interesting about this approach is that Geoff Johns doesn’t really pull any punches in making the members of the League come off as cocky jerks. As the book’s titular characters, you would think this series would paint them in the best possible light. But that isn’t the case. Instead, we follow along with Trevor as he acts as the liaison between the League and Congress, a job that looks like it’s an absolute nightmare made worse by the fact that Trevor is essentially an errand boy for “gods.”

Oh man, does Johns make the members of the Justice League cocky jerks. Hal Jordan especially, and to some lesser extent, Barry Allen.

I mean, just look at Hal’s cockeyed smile. I feel like he could instantly start to sell me insurance at any point in time. Also, the team dynamic is drastically different from an previous incarnation of the Justice League. This issue doesn’t really expand the characters at all, which is a little disappointing. Batman is still trying to enact order and tactics and gets frustrated easily, Wonder Woman is still Wonder Woman-ly, Aquaman still hits things with a trident, and Superman might as well not exist in this book at all. This feels soooo weird.

The art in this book is different, with Gene Ha standing in for Jim Lee. Ha does a great job of drawing out the emotions and facial expressions of Steve Trevor. They are perfect for understanding what is going on Trevor’s head. Ha’s strengths come in at the close up shots of people, but they get a little lost in the two pages spread in the middle, but that is still amazingly fun to look at.

We see each member of the JL doing what they do best, in their own unique style of superheroing. This, I like. 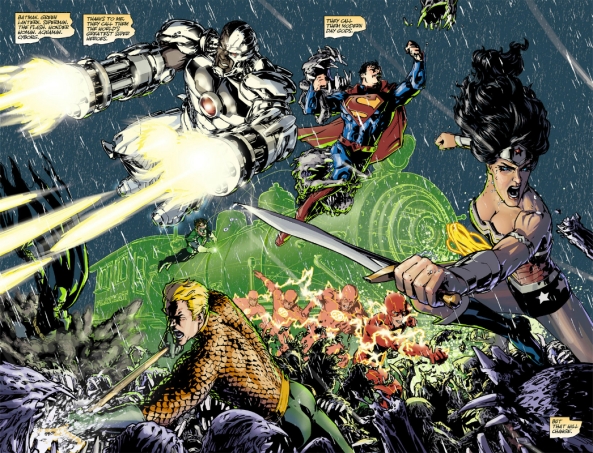 Even after five years, this team still doesn’t seem to work well together. Why oh why? This is the JUSTICE LEAGUE, they are supposed to set the bar for all other superhero teams. I am seriously hoping that with the introduction of another ‘big’ villain in David Graves, they will be shocked into a better team dynamic. He has stolen the Orb of Ra, and wherever that Orb is, means that Metamorpho cannot be too far behind. That should be interesting.

This issue really brings to light the Gods vs people idea of the Justice League. The ‘gods among men’ so to speak. It is not an uncommon trend for superhero comics, especially Justice League, but it needs to be fleshed out more. I love Colonel Trevor as the bridge between the two ideas, and I hope to see more. But this felt like a Steve Trevor, Agent of ARGUS book, and not a Justice League book — that’s okay, as long as we going up from here.

I want to take a minute and get excited about the SHAZAM back story. I have always loved SHAZAM/Captain Marvel, and I am looking forward to this story. I really liked how this didn’t overreach, and did a good job of setting up characters and the universe. Through the magic of retcons, Billy Batson is a little asshole.

Let me say that again. Billy Batson is an asshole.

This is weird, because Billy Batson/Captain Marvel was always the one person you could count on to do the right thing. Of course Johns is setting him up to learn a big life lesson, but this still scares me a little. Oh, and I’m not thrilled that Dr. Sivana is Lex Luthor with glasses. I miss the sniveling old bald man. But I LOVE that this story is bringing up the science v. magic in society, and that should make for a very interesting plot line. Up until this, magic has kind of fallen by the wayside in the New 52, save for Justice League Dark, and to a lesser extent, Swamp Thing. But colored me impressed. I think I may be more excited for the SHAZAM storyline than the Justice League story.

Shelby: I don’t want to see the members of the Justice League behaving like dicks. There, I said it. They all kind of struck me as just…childish. Cyborg was the only one really accomplishing anything, and isn’t he a child? I agree with you completely; retconned or not, this is the Justice League, the team of teams! Come on, people, pull it together! I don’t know, I can’t even really muster up a proper criticism, I just feel underwhelmed.

There were some things I liked. This issue was full of small moments, both in the writing and the art, that I really appreciate. I was immediately taken with Ha and Lyon’s artwork; some of the high action scenes get a little muddy, but they imbue a ton of personality into the characters. All the characters, background extras included. My favorite moment is at the press conference, there’s some old man throwing up some JL gang signs.

Haha, what? That’s a little dumb, and I totally love it. This book is full of little stuff like that. Johns gets in on the action too, with Aquaman telling Hal he doesn’t need an umbrella in the rain (get it?!?), or Hal hitting on the woman they rescue from the monster. There are a ton of small moments in this book that are damned charming, and bring a smile to my face. Are these small moments enough, however, to make up for the fact that the characters are acting like cliched mismatched college roommates for a mediocre coming-of-age comedy? Well, they keep me from completely hating it, at least.