Drew: Back when we started reading this title, Patrick and I couldn’t believe how much we liked it. We were wary of this title, famous for it’s leering depiction of Starfire, but Scott Lobdell’s charming characters and Kenneth Rocafort’s distinctive art won us over. The title was a blast, and we couldn’t understand all the ire that was directed at Lobdell — he seemed like a great writer to us. Our love affair started to wane a bit as Rocafort left, and branching out into Lobdell’s other titles left us unimpressed, leading us to question Lobdell’s prowess as a writer (perhaps unfairly). Is Lobdell the clever writer we thought, or the hack so many were making him out to be? In Red Hood and the Outlaws 0, Lobdell seems to address that question head-on, counting on our writing him off as pedestrian in order to better shock us with a earth-shifting twist in the epilogue.

To Lobdell’s credit, his retelling of Jason’s origin isn’t that pedestrian in the first place, but the very notion of a retold origin story can sap a lot of enthusaism from a familiar audience. Jason had a rough childhood (one that Lobdell interestingly traces back two generations, shifting the blame for his upbringing on how his parents were raised), was orphaned, brought into Bruce’s fold, and eventually became the second Robin. Things seem hunky dory until Jason is lured to a warehouse to reunite with his heretofore-presumed-dead mother. Surprise! The Joker is there, and beats him within an inch of his life before blowing up the warehouse with him inside. Jason is unable to fill us in on the sequence of events between his death and his resurrection — potentially valuable information for those trying to piece together the DCnU continuity — but that’s where the story ends.

…Or does it? In a surprise epilogue, the Joker reveals that the whole thing was his plan. As in THE WHOLE THING. The Joker had Jason’s dad arrested. The Joker was responsible for Jason’s mother’s apparent OD. The Joker made sure Leslie Thompkins found him. The rest, as they say, is history.

There’s much to like in this issue, but pretty much everything gets overshadowed by Joker’s reveal. Much like Snyder’s Anton Arcane reveal in Swamp Thing 0, this doesn’t actually change anything we know, but places events in a starkly different context, emphasizing the “Joker is awful to Jason” theme of this story. It also recasts the Joker as a master planner, capable of manipulating even Batman without anyone ever suspecting. That kind of hyper-competence isn’t always a feature of his characterization, but it’s always a frightening one when it appears.

The question is: do we buy it? The joker is a notoriously unreliable narrator, so the fact that this story is told from his perspective should raise our suspicions a bit. That could make for a clever, noncommittal out for this story, but Lobdell frustrates that reading at every turn, showing us several events from Jason’s story exactly as they happened, but from the Joker’s perspective. 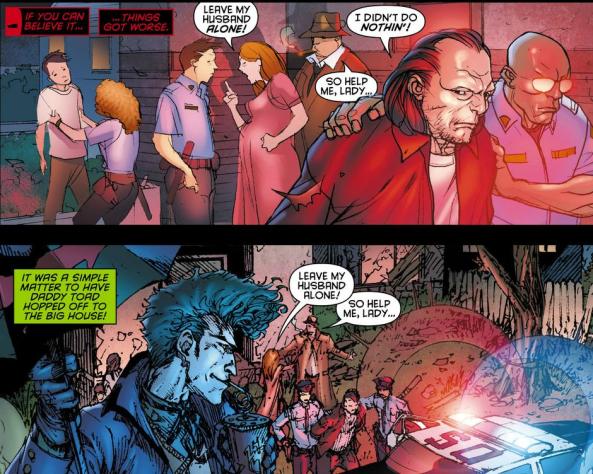 The fidelity between these versions suggests some kind of objective reality, making it unlikely that the Joker made this up whole-cloth. It could be possible that this Joker is in Jason’s head, indicating a more complex victim complex than has ever been indicated, but I doubt it. The Joker seems to be addressing the same audience that Jason was during his story. Who that audience is isn’t exactly clear, but that strikes me more as a standard post-modern Lobdellism than an indication of anyone’s subjectivity.

Instead, this issue seems to openly assert that — even across the admittedly different subjectivities at play here — the actions happened largely as they were presented here. This is emphasized by the change in artist between Jason and Joker’s stories, which present the world differently, but the facts remain the same. It isn’t clear who was on what sequences — Pasqual Ferry, Ig Guara, and Brett Booth are all credited — but everyone seems to match Lobdell’s cheeky tone perfectly. My favorite moment by far is when Jason gives us a quick glimpse into his father’s upbringing.

It’s certainly cute, but cuteness is strangely an important part of this title. Taking itself too seriously has been the biggest fault of recent issues.

While the details of Jason’s origins could have bearing on the series proper, this issue seems perfectly designed as an introduction to the character. It’s placement in the middle of an ongoing arc is a bit graceless, but this is one of the more effective zero issues. What did you think, Patrick, was this an unnecessary interruption, or a bizarre return to form for the series?

Patrick: I’ll herald this as a return to form. Lobdell’s particular brand of writing is most effective when applied to world-weary cynics that secretly care. It’s such a narrow character description, but holy hell does the man write tortured-cute well. This tone felt misplaced on Superman and even with Starfire’s dark past, the voice just dun’ fit that character. I suspect when Lobdell really digs into Arsenal’s past, that we’ll find the tone appropriate for that character as well. But in the meantime, I’m happy to focus on Jason. I’m also happy to see the art in this issue doing its damnedest to fill that Rocafort-shaped whole in my heart. Whichever of the three credited artists is responsible for so thoroughly capturing the spirit of Lobdell’s Jason Todd deserves a medal.

Drew rightfully points out that is origin story is strangely placed — what with the fate of our boys in space still unresolved. And while the fairly routine exercise of telling the hero’s origin story was thematically rich in is own right, it’s that bottom-drops-out moment that excites the everloving shit out of me. Joker hijacks the last four pages of the issue and he changes EVERYTHING in those four pages. Art style, narrator, YOUR PERCEPTION OF REALITY. It’s perfectly unnerving, and totally in keeping with the Joker’s character. We’ve been told for the last couple months that this big bad wolf is coming back to Gotham and signs of his coming grow every week. In Batman 0, we saw the unhinged beginnings of the Joker — complete with unnecessary murder and groan-inducing jokes. But Red Hood suggests a Machiavellian social architect that only wants to play the best possible trick on Batman. We can argue until we’re blue in the face about timelines (if Joker wasn’t Joker during the events of Batman 0 then how could blah blah blah?), but I’m struck by how psychologically true it is that Joker would want to give Batman the gift of another Robin — if only because he knows he has the power to take it away.

And maybe Joker doesn’t need that fanfare — maybe teasing him in Batman was more than enough to herald his return. But let’s be real here. Joker has been an elemental force of chaos in the lives of most of the DC heroes, but there are three members of the Bat-family for whom that chaos is deeply personal: Batman, Batgirl and Red Hood. And now that I think about it, Batman and Joker’s beef is so personal because Joker makes a habit of targeting those close to the Bat. And while Babs was able to get over her partial paralysis, Jason was never able to get over the wounds dealt to him by Joker. Sure, he lives again, but it’s telling that the origin story of Jason Todd (as presented here) glosses over his entire tenure as Robin. That’s all part of his origin. Even if the whole thing hadn’t be orchestrated by Joker, Jason Todd is Red Hood because of the Joker — plain and simple.

I’m in defense-mode here, because (while I haven’t checked), I have to imagine this has the continuityphiles squirming in their chairs. “It was _____ all along!” is a tough sell, especially when you know full well that wasn’t the plan from the beginning. It’s what makes us yell “RETCON!” and throw a flag on the play. But Jason’s resurrection (as shrugged off here) was partly triggered by Superboy Prime’s retcon punch — a move infamous among fans and detractors alike. To buy into Red Hood at all is to accept that sometimes things change, and you’re not always going to be satisfied with the explanation. I find this particular change wildly compelling (just look how much of this write-up we’ve spent discussing the last 4-pages.)

Is there a more effective image than Joker wielding a crowbar? It’s so raw – so savage – and so inextricably linked to the worst in a list of obscene disappointments in Jason Todd’s life. (Or his death… or, whatever.)

I love it when this book crosses through Snyder-lead events (as established by a pattern of one), and this issue has me champing at the bit for a reprise of that dynamic.