Today, Drew and Shelby are discussing Red Hood and the Outlaws 15 originally released December 19th, 2012. This issue is part of the Death of the Family crossover event. Click here for complete DotF coverage.

Drew: Back when I first read Red Hood and the Outlaws 0, I was in awe of the backup revealing the Joker’s role in Jason’s life. I wasn’t sure at the time whether or not I truly believed Joker’s story (he’s not the most reliable narrator), but the thought that it could be true was a fascinating idea. One of the things that struck me about that story is that it more or less confirms that Joker knows who Batman (and by extension, the rest of the bat-family) is, a notion that has been at the forefront of the Death of the Family event. I’ve staunchly defended the possibility that the Joker is bluffing, but this issue’s focus on his relationship with Jason makes that outcome seem as remote as ever.

The issue begins with the police closing in on Jason as he cradles Isabel in his arms (keep in mind: Isabel knows that Jason is the Red Hood). Jason insists that they help her, and then tells them he’s leaving whether they try to stop him or not. Of course, they try to stop him, to no effect, and he makes off with Bullock’s car. Turns out, Joker was waiting for him in the car, and quickly gasses him. When Jason comes to, the Joker is threatening him once again with a crowbar, but Jason turns the tables before being subdued yet again. When Jason comes to this time, the Joker has laid out a little series of vignettes that suggests that he does in fact know Jason’s identity. Joker then drops Jason through a trap door, where he lands next to an unconscious Tim Drake. 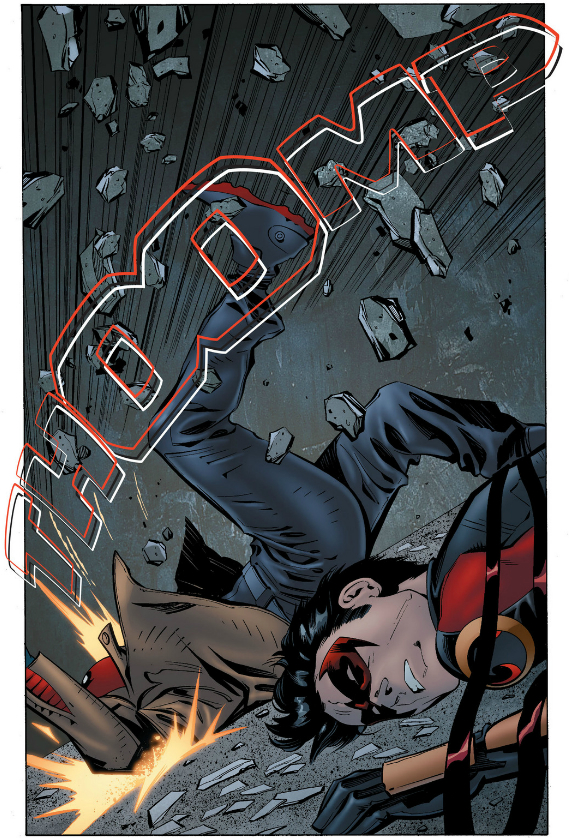 Meanwhile, Roy and Kori intercept a call Bullock made hoping to reach the mystery man from Isabel’s apartment. That sets them on the chase to help Jason, but they’re sidetracked when they receive another distress call from the Teen Titans. Sure enough, when Roy and Kori arrive, it looks like the Titans are in the grips of some of Joker’s goons.

That last little bit actually has me more excited for the Titans’ role in this event than I anticipated — I may not care at all about them, but I do care about Roy and Kori. Death of the Family is so intensely about the bat-clan, it didn’t seem like there was a natural place for Jason and Tim’s teammates to go, but putting them together means they get to coast on each other’s goodwill. Moreover, knowing that Tim ends up unconscious in a pit while his teammates are battling henchmen makes me actually excited to read Teen Titans 15, which is a pretty herculean feat.

As excited as I am to see where this goes, this issue itself didn’t really do much for me. I think my problem stems from the ambiguity of Joker’s story. A lot of what the Joker says makes it seem impossible that he doesn’t know, yet he still refuses to say Jason’s name.

I get that Joker is trying to seed doubt between Batman and his disciples, but then why not just come out and say the name? It makes me think that the Joker really is bluffing, but then how did he know about all of these moments from Jason’s life. It doesn’t make any sense to me, and unfortunately, I can’t really tell if it makes any sense to Jason. I never thought the mask-with-the-mouth design made all that much sense, but at least it had more expressive qualities than this one. All I could really tell here was that Jason’s eyes were open.

This really feels like a missed opportunity, since — as Shelby has pointed out before — Jason has one of the biggest bones to pick with Joker. This should be one of the most emotionally wrenching corners of the crossover, but I found it to be incredibly dry. Maybe it’s because we don’t know what to believe, maybe it’s because we keep cutting away from Jason, or maybe it’s because Jason gets knocked out in every other scene — the point is, I’m just not emotionally invested in anything that’s going on here. What do you think, Shelby, am I missing something, or is this issue?

Shelby: Drew, I completely agree with you. I think the big problem with the Jason/Joker confrontation is how impersonal it is. Despite the fact that the Joker has set up these very personal re-enactments of Jason’s life, the Joker isn’t physically present at all. His physicality is a huge component of what makes him so scary and dangerous, especially in this event. Having him distantly pulling levers eliminates a lot of the tension that should be in this scene. Really, between the Joker’s absence and Jason’s featureless mask, we’re basically watching no one in this scene.

I also find I’m way less invested in the elaborate “comic book” scenarios. I mean, where is Jason right now? Abandoned warehouse/labyrinth? What exactly does it take to install working trap doors in concrete? If I’m going to feel the danger of the situation, I want to believe the situation the characters are in. I had a similar concern with Batman 5, with the Court of Owls underground torture labyrinth, but because there was so much suspense and emotion in the character I was able to get over it. Maybe if I was more invested in what Jason is going through here, I could ignore the implausibility of the setting. I can’t help but compare Jason’s encounter with Barbara’s in Batgirl 15. In Batgirl, the Joker is there, his threat is physical and immediate as well as mental and emotional. It’s set at a roller rink that he just took over; no elaborate traps or gizmos, just a regular business that happens to be full of families of civilians. That issue is horrifying. This issue feels like a means to an end, a way to just get Jason in place for next month. I do think Kori and Roy are cute, though.