Taylor: Go big or go home. I don’t really know where this phrase came from or even what it really means. I suppose it probably means a person should come prepared to give everything they have to whatever situation they are about to encounter. I guess that’s “going big.” There is perhaps some virtue in that; I can admire anyone who can totally devote themselves to a cause or an idea. But with the election finally (finally) winding down, I also have to question if perhaps there is more merit in playing your cards close to the chest. I question how anyone can fully support one candidate or the other when eventually they will do something to piss you off, or almost certainly break a promise they blatantly made on the campaign trail. The ability to hold back, reserve judgment and always keep a little something extra for yourself, whether in politics or comic books, is a trait that should be applauded. John Constantine has this virtue (if he really can be said to have any such thing) and normally Justice League Dark does as well. But in the first annual edition of this title the creators do just the opposite, they go big and it pays off.

A lot happens in this issue, since it’s about twice the size of your average edition, so let’s dive right in. We left our heroes crash-landed in the Sahara Desert after being knocked out of Limbo. Frankenstein shows up in a helicopter to help our heroes out, and agrees to help them in their chase of Nick Necro. Lucky for them all, the House of Mystery has rebuilt itself, so they get on their way. Meanwhile, in The House of Secrets, Nick — in typically evil mastermind fashion — tells Zatanna his plan for capturing the Books of Magic, which involves killing Tim Hunter. He also tells her how Felix Faust rescued him from Hell by giving his soul to the devil in exchange for resurrecting Nick. Together, they plan on getting the Books of Magic along with Dr. Mist, who helped them set up such an elaborate plan. Back in the House of Mystery, Madame Xanadu and Tim arrive, having escaped Faust and our heroes set out after Nick. Along the way, Constantine summons Amaya (of Sword of Sorcery fame), who has the ability to restore the power of magic to Tim somehow. Constantine also summons Andrew Bennett to the fight. With The League fully assembled, they arrive at Nanda Parbat and beat up all of Nick and Faust’s army. Nick then tries to grab the four Books of Magic, but is thwarted by the cunning of Constantine and a protective field around the books. Tim, being the only one who can control them, picks up a book, which is actually some sort of machine and teleports away, with Zatanna in tow.

Writer Jeff Lemire really threw all of his cards on the table for this issue, and it pays off if for no other reason than all his cards are aces. We see almost every single character we have met in this series in this one issue, and while it is kind of a clusterfuck to have them all running around at once, I was enjoying every second of it. The usual cast of the Justice League Dark is pretty entertaining on its own, given the presence of Constantine and Deadman (both great characters), but when you throw in Frankenstein and Amaya the entertainment value skyrockets. Add to this the presence of everyone’s favorite cannibal Black Boris and the ent-like Blackbriar Thorn on the opposing side, and it becomes virtually impossible for this issue to fail. I’ve always been a fan of big shot where an assembled team of heroes leaps into action and in the same vein of going all in, artist Mikel Janin delivers by giving us a nice scene of the Justice League Dark doing just that.

Naturally, the battle is pretty entertaining, what with Frankenstein blowing off a guy’s face then decapitating him, and the usual witticisms from Deadman. One would expect a similar whiz-bang fight to explode between Constantine and Nick Necro, however, this isn’t exactly the case. While this issue does “go big” in every sense of the phrase Lemire is cognizant enough to realize that he can’t give everything he has all at once into one issue. There is no endgame battle between Constantine and Nick because much like his author, Constantine has a trick up his sleeve and instead of relying on brute force or magic to defeat Nick, he uses trickery. This trickery is what sets Constantine apart from the rest of the characters in this title and it is also why we find him so interesting. Just when we think he has given it his all we are surprised to learn that he is a step ahead of everyone else with an ace up his sleeve. Lemire, similarly pulls the rug out from under the readers feet by revealing that the Books of Magic are actually mechanical in nature.

At this point in the title, all we’ve really encountered in terms of weird, out of this world shit, are things that are somehow derived from magic and the like. The reveal that there are machines involved in this world, perhaps capable of controlling magic, is both amazing and surprising and something I never saw coming. That the creators had the wherewithal to create an issue this grandiose that somehow manages to both deepen and raise questions about the universe they created is really quite remarkable and I look forward to seeing where it goes from here.

What say you, Drew? Are you a fan of the all-in approach to storytelling or do you like a more reserved approach? Did you find the crossover characters to be too much or just right?

Drew: Oh, I absolutely love the “bigger is better” approach Lemire took for this issue. I can think of no better example of this than the cliffhanger ending. Taylor’s right to emphasize how expertly Lemire answers our questions with just a much bigger, weirder question, but the thing I really appreciate about this ending is just how effective it is as a cliffhanger. Even great writers occasionally rely on stopping the action mid-sentence and calling it a cliffhanger (Geoff Johns, I’m looking at you), but Lemire manages to actually tease a much bigger arc while satisfactorily concluding the present one. It’s a neat trick, one that emphasizes just how capable Lemire is as a writer.

Sure, there are maybe too many characters in that final battle for us to really pay attention to, but it’s not really about them — it’s about us. It reminds me a lot of the final battle in a Tolkein book (I suppose the presence of magic and trolls and swords helps make the comparison), which I always saw more as a closing credits reel than something that might actually be meaningful to the characters. I mean, this is just another battle for Frankenstein, so the fact that he’s here cracking one-liners is really for our benefit. The cumulative effect is a battle that feels huge, even though we’re rooting for an army of eight.

The more emotive moments take place off of the battle field, and seemingly all include Zatanna, who has become the real emotional center for this title. Caught between Constantine, who maybe doesn’t care about anyone, and Nick Necro, who definitely doesn’t, Zee is the only one whose conscience we can trust. More than our moral compass, she’s also our emotional one — Constantine is too cool to tell us when something is scary, so we need someone like Zatanna around to show us the stakes. Fortunately, Janin is particularly adept at drawing a terrified Zatanna.

It makes for a harrowing final scene, where we fully believe Constantine has just killed a child with his bare hands. Of course, you couldn’t expect to go big in a Constantine story without some kind of con, and that’s just what we get.

Daringly, Lemire showed us this particular con at the start of his run on this title. It’s a ballsy move — one I’ve actually been looking forward to since we saw it the first time (yet somehow totally didn’t see coming when it happened here) — that plays perfectly to the questions we all have about Constantine’s morality. Or is it his affection for Zatanna? Point is, we buy that he would do it — at least enough for this moment to really hit us: 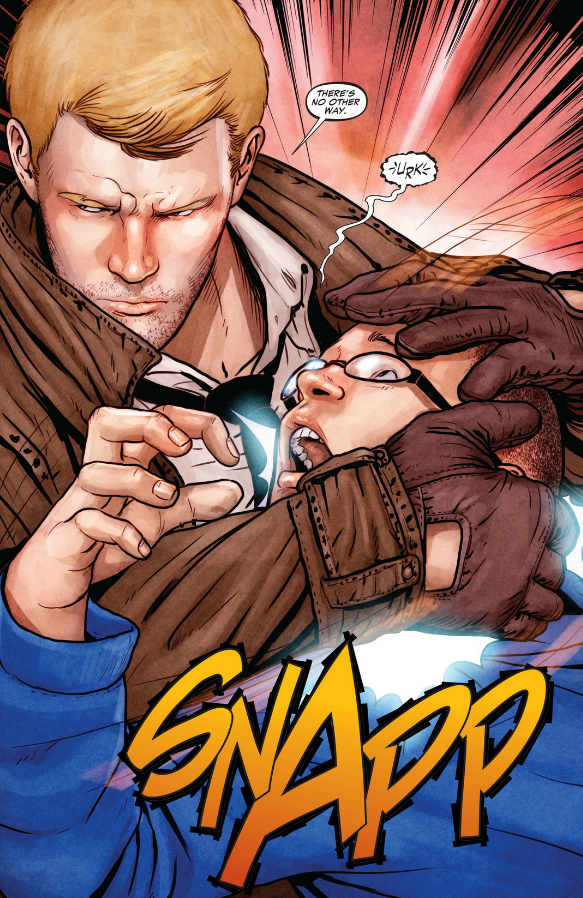 It’s a visceral moment that only works because of Constantine’s moral ambiguity. We’re relieved when we learn it was a trick, precisely because we thought it might not be.

That weird mix of emotions is still overhanging the proceedings when Timothy up and vanishes with Zatanna in tow. Obviously, Constantine (and the rest of the team) is going to look for them, but is it for Tim, or is it for Zee? As long as Constantine doesn’t have to answer these questions, we’ll never know, but I’m looking forward to that reunion either way.