Patrick: The End of the World. Pretty bleak subject matter, right? But we can go bleaker. Let’s kill as many superheroes as possible, and then use their grotesquely reanimated corpses to attack our protagonists. Also, no one’s safe, so those protagonists themselves can get picked off at a moment’s notice. Still not grim enough? Then let’s keep flashing back to the putrid death of our hero’s family. These are the principal building blocks of Rotworld. So if I’m using the adjectives “grim,” “grotesque” and “bleak” so much, why is this issue so much fun?

This issue essential shores up the final numbers for the battle against Anton Arcane and his Rot Army. On the good-guy side, we’ve got the newly rescued, recruited and recharged Green Lantern Medphyll joining the ranks of Animal Man’s strike-team. The army of the Red is actually looking pretty impressive, with a fair amount of the extended Justice League Dark (Frankenstein counts as extended JLD) and this new plant-based Green Lantern (plus Beast Boy!), but the tables quickly turn with the introduction of Rotified versions of the Justice League (hereinafter referred to as Justice League Rot). Rot Flash’s first order of business is to wipe out most (if not all) of Frankenstein’s army and swiftly disembowel John Constantine. As though there’s any other way Flash would do disembowel anyone… 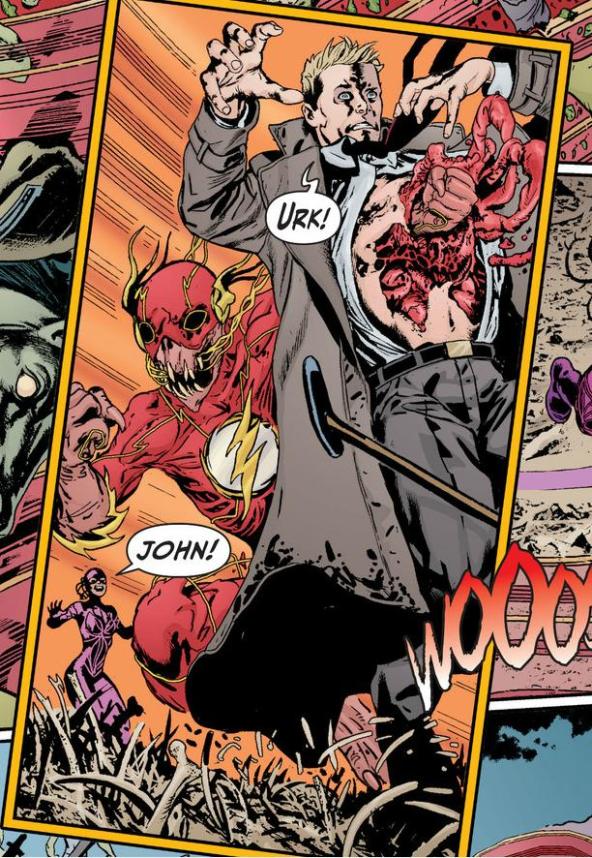 As has become common practice with this series in Rotworld, a large portion in the middle of issue is devoted to the Baker family’s fall to the Hunters… Two. The Hunters are at a bit of an impasse, being that they’re short one member and fear taking on a full-strength-Maxine. So they cut a deal with the five-year old: surrender yourself, and become the Third Hunter or we murder your family. The final straw comes when one of the Hunters starts to attack Socks with his Rot Magic (at which point, I nearly screamed, by the way), and Maxine acquiesces.

Which raises the question Buddy has not yet bothered to ask. Maxine may be alive, but in what capacity? While I’ve always found Buddy’s motivation in this environment more sincere and immediate than Alec Holland’s, the thought of ending this event with a Buddy v. Arcane brawl doesn’t really carry that much emotional heft. Anton Arcane is a Swamp Thing villain — not an Animal Man villain. But I’m hard pressed to come up with a more personal confrontation than that between Buddy and the Rot Daughter he failed to protect. We knew all along this was chugging toward a FINAL SHOW DOWN, and the stakes of that are just coming into focus now.

We’re four issues into this event and only now do we start to get a hint of what the final boss-fight might look like. Why hasn’t that been a problem? Part of the reason I have been less focused on Buddy’s goals is that I’ve been so engaged with his world. Jeff Lemire’s starting to establish a wonderful track record of pulling characters and concepts from the obscurest corners of the DC Universe and mashing them together. The last couple issues have had all the flavor of the Justice League Dark Annual (also written by Lemire) — partially because it features a number of the same characters, but also because there’s that same giddy thrill of collecting all the best toys and making them duke it out for the fate of the world!

Which brings me to the subject of cameos. A few issues back, we saw every single character that Rob Liefeld had written in the New 52 depicted as rotten husks of themselves, and there’s an interesting twist on that here. Before the Justice League Rot shows up, Frankenstein is grappling with Rot versions of Amaya (from Sword of Sorcery) and Cavlin Rose (the titular Talon).

Both of these characters were introduced into the New 52 during DC’s Third Wave in September. Lemire’s used Amaya in a few issues of Justice League Dark, so it’s not a surprise to see her here, but this has got to be the first time Calvin has appeared outside his own title ever. It’s cute — both of these characters are — in some capacity — partially presided over by the authors of Rotworld (Scott Snyder continues to get a writer credit on Talon simply for mentoring James Tynion through it), so it stands to reason Lemire would want to give a little shout-out to them here.

But there’s also a cameo appearance earlier in the issue by Green Arrow (whose series Lemire begins writing in February). It’s like as Lemire’s sphere of influence at DC grows, so too does the cast of Animal Man. Beautifully, I have this realization about the growing cast in the same issue I realize how deeply personal the final confrontation is going to be. No matter how big this title gets, it never fails to be small. How’s that for a magic trick?

Speaking of magic tricks, Steve Pugh’s handle on the various characters in play at a given moment is damn-near supernatural. His action sequences are super clear and manage to be funny and engaging and just plain exciting. I laughed out loud when I saw that Beast Boy had turned into a fucking beaver to gnaw at Blackbriar Thorn’s fingers. But, for me, the most impressive panels look like this: 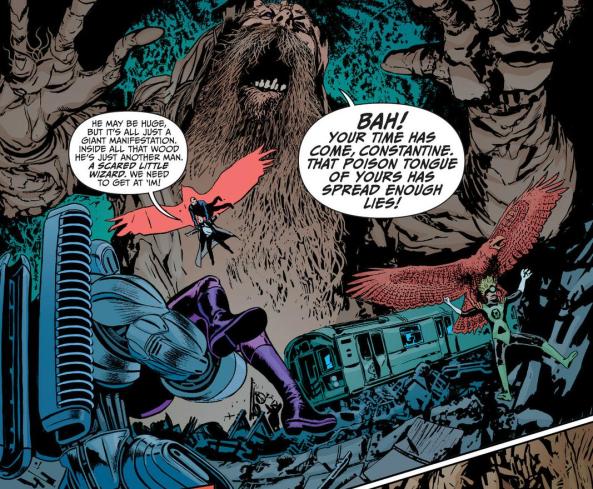 It’s just rewarding to see all the characters teaming up and using their powers in ways that clearly make sense to achieve a common goal. No one talks about it (“Okay, now you turn into an eagle and pick up the Green Lantern”), it just happens.

Shelby, how do you feel about the ballooning cast? Even if we’re expecting takesies-backsies, it was still pretty shocking to see Constantine gutted, no? Oh and how about Blackbriar? That dude’s getting a ton of play these days (again, seemingly because Lemire likes him).

Shelby: Constantine, nooooooooooooooooo! It’s true, I fully expect everything to return to normal by the time this is over, but I did not expect to see Constantine’s insides. At least he died in the most awesome way possible. Lemire is very adept at not only pulling in characters from every corner of the DCU, he is adept at using them well. Having the Justice League Rot guarding Arcane’s stronghold makes perfect sense; between Superman in the sky and Flash a.k.a. Rotling Amputation Tornado on the ground, everything but the most impressive ground force will be stopped long before they reach the castle. If they do make it, though, you’ve got Wonder Woman and Cyborg actually guarding the gates, and looking nice and gross while doing it.

There’s just something about the skin hanging off the face of Diana’s reindeer mount that is extra gross and awesome.

So the players are in place for the big boss fight. Interestingly, both of our heroes are facing an unforeseen challenge. I’m going to speculate some on Swamp Thing 16 as well, so if you haven’t read our review yet, you might want to do so before continuing here. Both Alec and Buddy are on a “one thing left to fight for” mission. But, Alec may have run into a little hitch with Abby’s current state of wholeness, and Buddy is going to most likely be actually fighting Maxine. The battle they’re fighting has already been lost, the only thing they have is this one personal connection to the world they used to know. So what does that do to these men, when the one person they’ve got left to fight for has been compromised? More importantly, what does that mean for the rest of the survivors who are counting on them? On a lighter note, I love seeing Blackbriar Thorn, but not as much as Bleeding Cool, who tweeted on Wednesday that he has never looked as much like Alan Moore as he does here. I’m going to have to agree with them on that one.