Patrick: Parents! Amirite? You spend your whole life trying to strike out a path for yourself, establishing your own values and building your own relationships, but parents can always re-enter your world totally ruin everything. They mean well, and they’re not even bad people, but the disconnect between the present and the past is never so pronounced as when someone’s parents are in town. Saga 7 spends a little time getting to know Marko’s parents, both as they were in Marko’s childhood on Wreath and now, when confronted with his half-bred daughter. As the holidays approach, this is an anxiety with which we can all readily identify. Lucky for most of us, that parental baggage doesn’t come with centuries worth of pointless warfare as a side dish.

When he was young, Marko’s parents instilled in him a great sense of pride for his people, but more pointedly, they also instilled a deep-seeded hatred of their enemies. In the present, we know Marko’s been able to overcome this prejudice to father a child with one of those enemies. But there’s no time to talk this out like adults: Marco’s mother has just teleported Izabela to the nearest planetoid. Marko grabs the magical equipment his parents just used to appear in his spaceship and chases after his incorporeal babysitter (with his mother following close behind). On the ground of the aforementioned “nearest planetoid,” Marko and his mother argue as only mothers and grown sons can argue, until they encounter a gigantic naked triclops.

Back on the ship, Alana doesn’t need a reason to become EXTREMELY DEFENSIVE, so she strings her father-in-law up in the vines of their plant-ship. He’s able to free himself (with magic), then puts Alana to sleep (also with magic) and admires his granddaughter (presumably, without magic). The cost of all this magic was the secret he uttered to Alana: “I have less than a month to live.”

And isn’t that the essence of having  your folks over to visit? They judge your lifestyle, they eradicate the things you value and yet you still  have to shelter them from the image of a giant’s monstrously swollen testicles.

The writing here is just so smart – Brian K. Vaughan has clever made observations about the way parental visit  interrupt your normal life and applied a fresh coat on science fiction. But all that space and magic mumbo-jumbo is precisely that: a coat of paint — color. In the hands of a less-skilled writer, I would be worried that the world would overshadow the characters. That never seems to be the case in Saga. BKV does occasionally have a tendency to drift away from the characters at the heart of his stories, and I was a little worried when issues focused increasingly on The Will or Prince Robot. Don’t get me wrong, I like those characters – but I love Marko and Alana. So much so, that it’s a relief to see both so prominently featured in this issue.

Fiona Staples art is — as it always is — incredible. She hits all the amazingly expressive beats she’s shown herself capable of hitting time and time again. Blah, blah, blah, she’s brilliant. One thing I noticed in this issue is that she’s very good at depicting the serenity of a place. Twice in this book, she lulls the audience into a dopey, dreamy sense of security before popping horribly violent imagery into that same space. The effect is jarring as hell: eliciting the exact emotional response the team is going for. Seriously though — look how peaceful Marko’s childhood looks:

She does the same with that planetoid. The place may be in ruins, but it seems like they’ve settled into this state of ruin. Also, this has so little to do with anything, but I absolutely love the drawing of Marko appearing on the surface of that world. He’s so determined and the landscape is so peacefully desolate and the magic of crash helmet is so vibrant. It’s about as close to perfect as an individual panel in a comic can be. 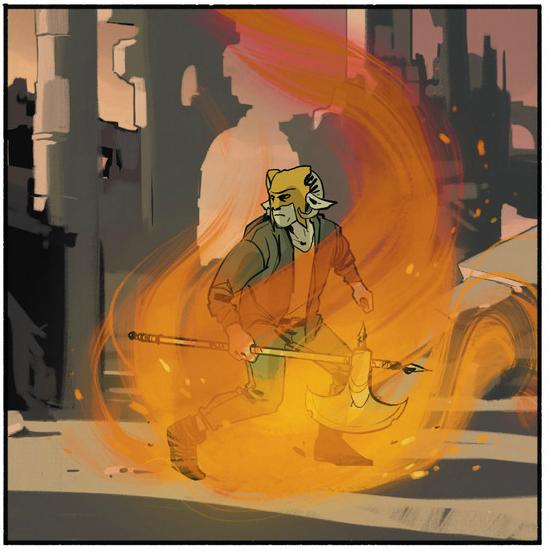 I feel like I’ve neglected the Alana portions of this issue… well, Shelby, for the sake of enforced gender norms, I’ll leave that responsibility to you!

Shelby: ISN’T THAT SO LIKE A MAN! Just kidding, of course: I relish the opportunity to talk about Alana because she’s such a phenomenal character. One of the things I like the most about her is her believability. I’m not going to speak to the different ways men and women think, simply because I haven’t experienced thinking like a man. I can understand those differences from an intellectual standpoint, but that’s about it. There are a lot of writers out there who write female characters in the same way; they understand the way women think the way someone looking at situation from the outside understands it. Like Gail Simone with Batgirl, Vaughn has figured out how to write women in a way that’s realistic. Alana has that decidedly female voice that is somehow both strong and weirdly self-conscious. She’s a perfect foil for Marko; she’s strong when he needs her to be, and vice versa.

What I like most about this issue (besides all of it, of course) is the dichotomy of these two couples. Both involve a spirited, independent woman and a laid-back, mellow man. I love seeing Marko’s dad take charge of the situation, in a very calm, no-nonsense sort of way. I can see immediately that Marko’s mom is going to be that mother-in-law you hate, and that Alana will especially hate because they are so very similar. There’s also an interesting intimacy between Marko’s father and Alana from his big secret. She has knowledge of him that his wife doesn’t even know, and I’m looking forward to seeing how that will all play out.

This title is really built around relationships: Alana and Marko, The Will and The Stalk, the Robot Royals, Marko’s parents, even the two sides of the the Wreath/Landfall conflict. The one thing that unites them all is passion, be it passion for love, hate, sex, whatever. In the middle of this web of relationships sits little baby Hazel. Her mere existence has created repercussions spreading like ripples in a pond, how many more relationships will be built and broken by her before the story is over?