Patrick: For all of its virtues, I don’t ever feel good after reading Watchmen. There’s beauty to be found in the way Moore and Gibbons express the fully realized psychology of their characters, but the world is undeniably grim. There’s not a single triumphant moment that isn’t heralded by some deeply disturbing underlying darkness. But in expressing this darkness, the original creative team is only exposing uncomfortable truths. It’s a rotten feeling that settles in your gut as you put the volume down and take it all in. Not many works even strive for this particular brand of profundity, but Darwyn Cooke’s Minutemen achieves this frequently. In issue 5, the gut-punch is so severe as to send me back through previous issues and previous write-ups, muttering impotently to myself “say it ain’t so.”

As the conceit of the mini has been that Hollis stopped by to visit all the former Minutemen before publishing his book, this issue continues to use this tour as a framing device. He stops by the Los Angeles home of Sally Jupiter, where he predictably gets an earful from the old Silk Spectre. Another framing device introduced in this issue is the use of the tapes of Silhouette’s psychiatric evaluations: she was made to describe other members of the team, and those descriptions have imbedded themselves in Hollis’ brain.

After SS quit the group and Dollar Bill died in the famous cape-in-the-door accident, the Minutemen were all-but-defunct. Until one day, they’re approached by Bluecoat and Scout with information about a Japanese attack on New York City. The key weirdness here: Bluecoat and Scout are comic book characters, not “real” superheroes. (Proof that Cooke was thinking at least one issue ahead, check out this panel from issue 4.) 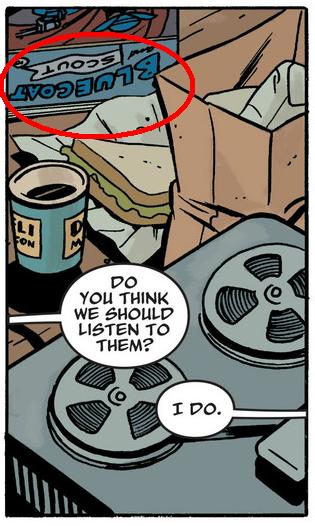 The four remaining Minutemen team up with Bluecoat and Scout to foil the attack, but Bluecoat is killed and Scout is exposed to a lethal amount of radiation in the process. Turns out these vigilantes were actually Japanese themselves – a  father and son pair that were part of this attack until they realized how sinister it was. As the government covered up all evidence of the attack, the boy in the Scout costume dies slowly, unrecognized and alone. This injustice causes Hollis to articulate the theme of the issue (and possibly the theme of the entire mini): the world isn’t fair – heroism does not necessarily lead to notoriety, and stupidity (and immorality) does not necessarily lead to failure.

It’s kind of a middle-finger to the myth of the American meritocracy. Powerfully, this notion starts to dawn on Hollis as he cradles Scout following the attack on the Statue of Liberty.

Following this incident, the Minutemen drift apart. They’re made to unmask in 1952, and everyone but Hooded Justice complies. Three years later, Hollis finds himself back on the unending case of missing children. He follows some clues back to the circus and is horrified to discover that he’d been chasing Hooded Justice for the last 15 years.

Ho, man. Not only is Hooded Justice the man who has been kidnapping and torturing children for over a decade, there’s enough evidence in these pages to suggest that he’s the masked Nazi doctor that did… whatever he did to Silhouette’s sister. It is a chilling revelation, and one that dramatically alters how we view the character. Not just that, it sets a dark precedent for all other mysteries in the Watchmen universe. Previously, it had been fun to speculate on Justice’s secret identity. We still don’t know his name, or what he looks like, but we know he’s a monster. It’s even possible that he killed Silhouette. Shelby, I know you love Hooded Justice, particularly the impenetrable mystery of his identity – how did you react to this news?

Cooke’s art continues to be absolutely stellar. His clean, bright character designs might suggest lighter narrative fare than we actually get, but I’m thankful for that more jovial visual tone. It helps that Cooke’s art is very expressive and great at clearly conveying action. I could post any number of close-up face pictures to illustrate the former, but the later is evident in Mothman’s assault on Lady Liberty’s crown.

There are also a ton of references to the original series and previous issues of the mini. As Nite Owl closes in on Justice, he hears The Ride Of The Valkyrie, and the image of the old man in the garage wearing fake tits flashes through his head. It’s a reminder that the theme of unrewarded everyday-heroism is actually one of Hollis’ pet themes. The opposite then is also true. Indeed, the entire exercise of Under the Hood is meant to show how some of these heroes were not worthy of the public’s adoration. The Minutemen — as a team — may have had some fuck-ups on their record, but secrets can be so much worse than that.

Honestly, when I finished reading this issue, I was kind of dumbstruck. Darwyn Cooke wields the sucker-punch with such grace, it’s hard to dissect how he’s doing it. Shelby, I have myself the night to think about the events herein, but I know you have to respond with a little less time to let it all sink in – how’s it feel?

Shelby: I can’t believe it. Dumbstruck is a good word for it, I don’t know what to say, where to begin. I’ve always thought of Hooded Justice in the same terms as Rorschach; he sees the world in black and white, but believes very strongly in the right thing, in punishing the unjust. He was the first of the capes to start making headlines. He saved Sally from Eddie. Hell, I even felt a little sorry for him and Nelson for having to keep their relationship a secret. But to think that HJ has been torturing and murdering children for years, it’s almost too much to take in.

The reveal both clears some things up and further confuses them. I had always seen HJ as a hardcore conservative Libertarian; I believed he refused to unmask (hell, to even testify) during the Red Scare because of his strong belief in individual rights and freedoms. Naturally, I admired his undying adherence to his personal liberties. Now, though, I see that he didn’t want to unmask to prove his innocence because he wasn’t innocent! He was, in all probability, a Nazi war criminal. Even without knowing about the children, that makes him one of the worst villains in history. This also raises some questions about Nelson. While their relationship was definitely a sexual one, there were a couple references to them bickering like a married couple that led me to believe they had something fairly serious going. Is it possible that Nelson was in a serious and long-lasting relationship with a man who murdered children as a hobby and didn’t know it? On the one hand, it’s hard to believe anyone could be so dense. On the other hand, Nelson is pretty dense; he has a goofy, valiant outlook on the world that could easily blind him to reality.

Something doesn’t quite add up, though. I know that HJ beating the shit out of Hollis and leaving him for dead at the scene of the crime leaves little room for doubt that he’s guilty. Little room for doubt. I went back through all of the Minutemen issues; while it’s true that a hooded man was responsible for killing Ursula’s sister and countless others, it looks like Gretchen shot him before they made their escape together. We know HJ is German, but we also know he has nightmares about being a child alone in a circus, and finding something horrible. Is he recreating abuses he witnessed as a child, abuses he possibly received? Or was Hollis right when he hoped HJ was working the case because “the alternative was too much to consider”? We’ve got one more issue to go of this title, and I bet Cooke is saving the best for last. This is not the kind of story to go out with a whimper; like Silk Spectre, I’ll be sad to see this series end, but I’m also very much looking forward to seeing the conclusion Cooke has in store.

9 comments on “Before Watchmen – Minutemen 5”