Today, Drew and Shelby are discussing Batgirl 15 originally released December 12th, 2012. This issue is part of the Death of the Family crossover event. Click here for complete DotF coverage.

Drew: Much of being an adult is about suppressing our impulses. Taking that huge slice of cake, telling that inappropriate joke at work, or throttling the annoying guy on the train may cross our minds, but usually our understanding of the consequences wins out. As a crime-fighter with a secret identity, Barbara Gordon is particularly adept at keeping her impulses in check — she keeps it together when a case is frustrating her, or when a loved one is in mortal peril. Still, even she has her limits, and getting married to the man who paralyzed her AND JUST MUTILATED HER MOTHER is pretty clearly over the line.

Batgirl 15 alternates between the present day action at the roller rink, and a terrifying story Joker tells about marriage to his case worker years ago. In the present day, Joker makes his proposition clear: marry me or Barbara Sr. dies. Babs relents, but not before putting the hurt  in Joker, and almost shooting him through the spine. It’s a brutal sequence, and truly revealing of Babs’ mental state. She barely restrained herself from killing Joker’s goons in the previous issue, and she doesn’t even flinch as she holds the gun here. Only the threat of violence against Barbara Sr. gets her to drop the gun and carry on with Joker’s plan. Meanwhile, James Jr. consoles a panicking Alysia while he tries to help Babs any way he can. At the end of the issue, we get the sick punchline to the Joker’s marriage story: he plans on cutting the limbs off of his bride.

It’s a packed issue, but let’s talk about that gun scene. On Wednesday, Gail Simone mentioned that this issue contained a scene that she’d wanted to write for over a decade, and there’s no doubt in my mind that this is that scene. It’s incredibly powerful: Babs, mad as hell, tackles Joker, beats him brutally, and levels a gun at his spine, tears streaming down her face.

I can see why Simone kept that in the back of her head all these years. It’s a scene over 20 years in the making, and it doesn’t disappoint. Daniel Sampere’s layouts, which really capture the brutality of the beating Babs dishes out, really puts the scene over the top, delivering an emotionally devastating sequence that still has me biting my nails.

Partially, that’s because of the ambiguity Simone leaves us with. Would Babs really have pulled the trigger? I trust that she wouldn’t, but I’m not sure that she shouldn’t. Joker stories often find Batman wondering how many people have died simply because the Joker continues to live, which often makes killing him seem reasonable.

Of course, that’s exactly what the Joker is trying to do, as exemplified in Joker’s quip at the end of that page, “Mom and Dad are going to love you.” He might as well be saying “you’ve sunk to my level,” but it seems like Babs is too far gone to care — she just wants him out of her life forever. So, would she do it? It’s a weird question, since I suspect DC would never go for it, but would Babs kill the Joker if she could? I honestly have no idea, or how I’d feel about either answer.

That scene is so powerful, it sucks in all of my attention, but it’s surrounded by a masterful issue. The Joker flashback is appropriately terrifying, and the James Jr. stuff is downright fascinating. What are his motives here? When he showed up to creep on Alysia/torture Babs with the ghost of her childhood pet, I assumed he was a force of evil, but now he’s doing everything he can to help his mother and sister, and even comes to comfort Alysia. 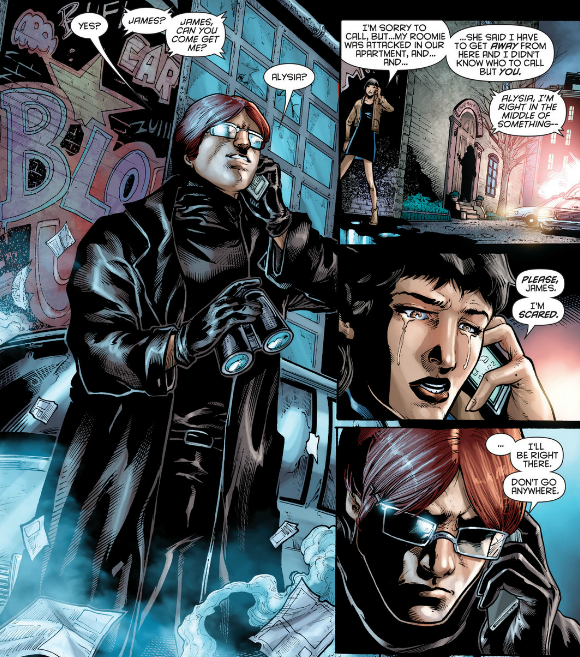 That’s not the behavior of someone using her like a pawn, and it certainly isn’t the behavior of a psychopath. Could it be that James actually has feelings, after all? We definitely need more information, but it’s an interesting prospect.

As good as that other stuff might be, I still can’t get over that gun scene. Were you as floored by it as I was, Shelby? Or as shaken? And what do you think — could Babs have pulled the trigger?

Shelby: I never thought I’d say this, but…I think she could. I think there is one person in all of the DCU who could drive her over the edge, and I think that person is the Joker. Moreover, I don’t think I would feel that badly about it. I know it wouldn’t happen, and I can’t imagine Batman without the threat of the Joker always there below the surface. Let’s put it this way: if Babs shot the Joker, I wouldn’t hold it against her in the least.

Simone is not kidding around with the chilling tone of this event. Both she and Sampere have mastered the Joker’s blend of psychopathy and humor. Sampere nails it with the first spread of Babs at the roller rink. 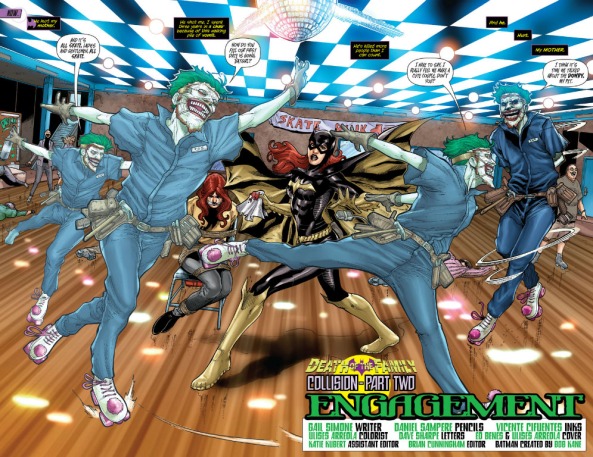 The dynamic, carefree style of the Joker, the pink pom poms, the lights, the bodies: it all fits into this confusing blend of normal (pleasant, even) and terrible that the brain can’t fully break down. That is one of the most frightening aspects of the Joker; is the gun he’s pointing at your face loaded with bullets, or a flag that reads “bang!”? You never know if he’s going to be kind of goofy or completely horrifying. I found myself laughing at Babs’ hilariously short bridal to-do list of, “Get Flower! Get Veil! Get Hitched!” even though just a few pages before she had been putting her mother’s severed finger on ice in the hopes of saving it.

I think the other truly frightening aspect of the Joker is his anonymity. We don’t know anything about him, there is only the Joker. Simone reminds us of this very cleverly through the flashback of the Joker’s chat with his case worker. We know almost nothing of what’s going on. We don’t know when this takes place, we don’t know how he got caught. More importantly, we don’t know how he knows about the case worker’s nine-year-old daughter, and EVEN MORE IMPORTANTLY we don’t know what happened to her. All we have is a nameless man talking about his journal. The scene takes place in a featureless interrogation room, there’s zero action, and it’s just as engrossing and chilling as the rest of the issue.

I’ve said approximately one thousand times before that Gail Simone is so successful on this title because of the voice she has cultivated for Babs. She’s hit on the essence of Barbara Gordon, and has used it to develop the character. Simone has done the same thing here with the Joker; she’s figured out the formula to the Joker’s unsettling madness, and has applied a liberal dose to this issue. I can’t wait to see how this wedding is going to go down, especially considering the wedding party. 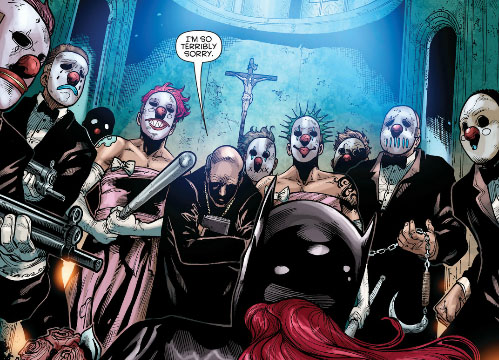