Today, Scott and Shelby are discussing Teen Titans 15, originally released January 2, 2013. This issue is part of the Death of the Family crossover event. Click here for complete DotF coverage.

Scott: “Joker is a psychopath like you’ve never seen before, but he usually likes to talk a lot before acting.” These are Batgirl’s words of encouragement that there’s still time to save Red Robin from the Joker. I’m not sure her inclusion of the word “but” is necessary; if the suspense thriller genre has taught us anything, it’s that being a psychopathic killer and talking for too long go hand in hand. But the Joker really takes it to a new level in Teen Titans 15. The lasting image of this issue is that of the Joker wheeling out a chalkboard to help explain the complexity of his evil plan to Red Robin.

Let’s back up. The issue begins with Batgirl meeting with the Teen Titans, who got her contact info from Red Robin’s phone. She confirms the Titans’ worst fear – that Red Robin has been kidnapped by The Joker – and maps out all of the places around Gotham where Joker has committed crimes before and would likely be keeping Red Robin. Meanwhile, Joker is doing his best to taunt Red Robin by wearing his cape, insulting the Teen Titans, and hinting that he knows a secret about Tim Drake: his real name. Joker reveals his plan to have the Teen Titans inadvertently destroy Gotham, wherein Kid Flash steps in some of Joker’s toxic “fairy dust” and quickly spreads it throughout the City, turning everyone into mindless killers. The plan is already in action, as the Titans are being attacked by poisoned hobos, just when Arsenal swoops in to rescue them.

Joker’s plan to make the Teen Titans feel responsible for spreading the toxin around Gotham is pretty convoluted. Using Kid Flash as a vehicle to spread his fairy dust is a decent enough idea, but going about it by kidnapping Red Robin and putting the dust in a place where Kid Flash might go to look for him doesn’t seem like one of The Joker’s best plans. I guess the joke’s on me, seeing how the plan totally worked, but I would not have understood what was going on if Joker had not explained it in so many words to Red Robin. And the issue suffered for how much explaining the Joker needed to do.

This issue is yet another Death of the Family tie-in, unveiling even more schemes in the Joker’s increasingly unmanageable  slate of schemes. The guy is everywhere (which maybe excuses his lazy plan involving Kid Flash) and the breadth of his knowledge about the identities of various masked heroes is frightening. I haven’t been following this title so I can’t fully grasp the implications of Joker revealing Red Robin’s “real” name, but is it possible that Joker knows things about Tim Drake that not even those closest to him know?

Brett Booth had a lot of fun drawing Kid Flash in this issue. Kid Flash was featured prominently, but Booth had to be economical with page space when showing Kid Flash working his way through the Wayon Apartment complex. He accomplishes this by dividing the top of one page into twelve small panels, over which Kid Flash witnesses the many residents of the complex stricken by poverty, which clearly has a strong emotional effect on him. That Booth pulls this off while still emphasizing motion within the small panels is impressive, and it’s just one of several instances where Kid Flash’s speed is exhibited. It helps that Kid Flash is a real smart-ass who loves pulling stunts, like conjuring up a map of Gotham that Batgirl jokingly suggests they will need, setting up Booth’s simplest and most creative depiction of Kid Flash’s speed.

Kid Flash is the perfect foil for Batgirl’s impatience. I love the look on her face when Kid Flash presents the map. It’s like she was so set in thinking that she’d have to walk these kids through every little step of this process that when they start showing they can quickly and competently get things done, she’s actually kind of annoyed.

It’s tough to pass a verdict on this issue because I don’t know enough about the history of the Teen Titans, but I couldn’t help feeling like this was a tie-in for the sake of being a tie-in. The Teen Titans trying to navigate Gotham could have made for a fun issue with the right story, but felt like a clash with the dark tone of Death of the Family. What did you think Shelby, did it work for you?

Shelby:  Not really, no. You’re totally right, it’s hard to pass judgement on this issue alone having not read any other Teen Titans books. While Scott Lobdell’s story is fine enough, I find I’m not at all interested in Fabian Nicieza’s execution of the actual dialogue. Kid Flash’s spastic behavior, Solstice and Bunker’s starry-eyed wonder, and Wonder Girl’s stone-cold attitude is kind of boring at best, and irritating at worst. Also, I get it, they’re teenagers; I don’t need iCarly and Justin Bieber references to remind me, it’s in the damn title of the book.

I could excuse all of that as a non-reader, though, if I were more invested in the Death of the Family stuff that is happening. Just like in Red Hood 15, I don’t like the cartoony and overly complicated master plan. You’re right Scott, getting Kid Flash to spread some sort of poison just by running around isn’t a terrible idea, but it seems like it would fit better in a one or two issue confrontation than in this huge event. It comes down to what I’ve come to expect from Death of the Family. Batman and Batgirl give us horror, pure and simple; those are sleep-with-the-lights-on books, and I love every second of it. Batman and Robin hasn’t been quite as scary, but it’s been GROSS, and I can get behind that as well. But the more light-hearted villainy we’re seeing here and in Red Hood just doesn’t match what we’ve seen elsewhere, and I just don’t enjoy it as much. Especially with the INCREDIBLE amount of exposition the Joker gives us. Not only is he telling Tim his plan after we’ve seen it actually happen, he also storyboards it for him on the blackboard. After we’ve seen it actually happen. We’ve seen the somewhat childish villainy, we’ve heard how it’s supposed to work, and we’ve seen an adorable chibi version of the panels with the original childish villainy; boring.

Booth has developed a nice, kinetic style for Kid Flash, it’s true, but his pencils of Wonder Girl and especially Batgirl are atrocious. 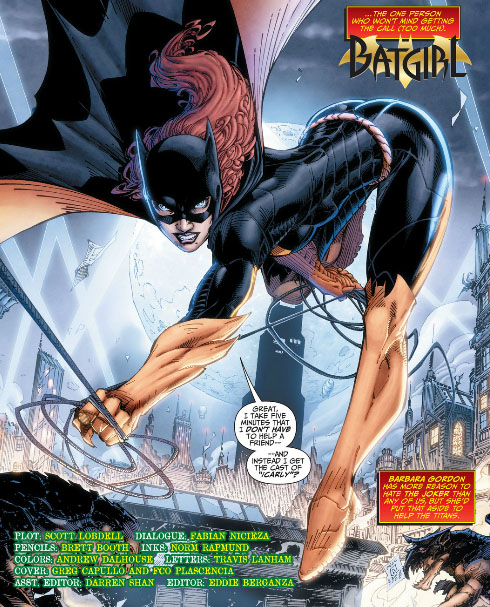 What is going on here? How is her body even doing that? Why is she so mad at me? Or, is she smiling? Is she happy she’s so mad at me? Actually, I think we’ve found why I’m generally so down on this issue; this is the first thing that greeted me when I opened it, is it really any wonder this contorted, muscle-bound, angryhappy, broke-back image put me off for the rest of the story?