Patrick: There’s a moment early in this issue when Batman realizes that Talia is going to put him through the Ten Ox Herding Pictures before being able to confront her directly. Batman asks, “Can’t we just have a conversation, like normal people?” to which, Talia replies, “We’re not ‘normal people.’ We’re special.” Batman’s got a point: Batman Incorporated is in ruins and Leviathan is everywhere. To make matters worse, Talia is moments away from making Bruce choose between his city and his son — with conflict so clear and so immediate, what room is there for a Zen parable about the process of becoming enlightened?

Batman arrives at the Monarch theatre to engage Talia in her final bullshit game. It basically amounts to Batman following the Ten Ox Herding Pictures, only the ox has been replaced with a goat, because of course it has. There are guys with guns, poisonous gases, and this horrible situation that I can’t quite put into words: 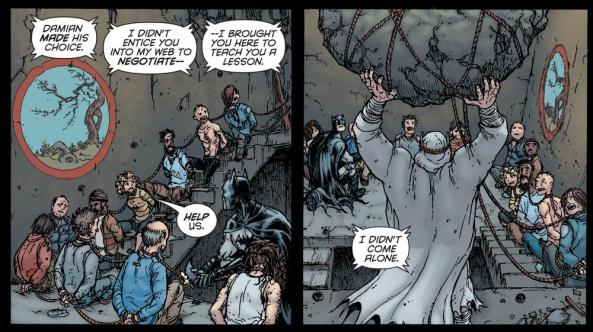 And Batman has his share of successes and failures, all the while baited by Talia’s voice inside his earpiece. Their conversation is — in turn — heard by everyone in the Bat cave, which at this point is Dick, Jason, Tim, Alfred, Damian and an ever-increasingly Bat-menagerie (Bat-Cow, Titus the dog and Alfred the new cat). Talia makes the terms of her game clear, for everyone to hear it: Batman must chose between letting his son die and letting his city die. It’s unclear how he’s going to make that decision, as he’s plenty busy jumping from fire-escapes and rescuing Knight, Squire and Batwing from Talia’s giant faux-bat henchman, but as Damian and the rest of the Robins spring into action, it becomes clear that Bruce may not have to choose after all.

I’m used to seeing literary symbolism in Batman Incorporated that I don’t totally understand — leastwise, not at first blush. This issue is a special case as the Ten Ox Herding Pictures is an intentionally obtuse story that abstractly traces the trajectory of a man in search of enlightenment. If any one wants a refresher on what each of these Ten Pictures is supposed to mean, you’re but a Google search away from hundreds of interpretations (though, one of my favorites was here), but you’ll find it frustrating to try to apply the individual pictures to the events in this issue. I was tempted to try to cram Batman’s journey or Damian’s journey or Talia’s journey into the form of the parable, but that just doesn’t pan out. So rather than looking deeper into the meaning of the Batman comic I was reading, I thought long and hard about the parable.

A little bit of a confession: I am often terrified to write about Batman Incorporated. There’s just so much going on in them and there’s so much of Morrison’s epic that I don’t have internalized. But there are also hosts of cultural and literary references that are going to whiz right over my head. After reading this issue, I had stress-nightmares about missing the point of this Ox Herder parable. How could I claim to be holding up standards of Retcon Punch if I failed connect the Batman story I just read to the Zen parable Grant Morrison so clearly thinks belongs within its narrative?

The stickiest part of the Ox Herder story is that it has no obvious message. Its sense of cause and effect are loose, and there’s a whole picture toward the end which is empty, to signify that the herder is neither concerned about the Ox or the great accomplishment of taming him. Understanding the Ten Pictures is less a demonstration of a man achieving Nirvana, and more a means of achieving Nirvana yourself. There is no easy answer behind it, but thinking about story proves to be its own rewarding activity. You’re rewarded for your curiosity, not with concrete solutions, but with the joy of having explored a thought exercise. In this way, the the Ten Ox Herding Pictures is exactly like Morrison’s run with Batman. The similarity intensifies as the Ten Pictures are principally a visual art that doubles as narrative — like a motherfucking comic book.

Nestling this story within some pretty straightforward Batman adventuring is a stroke of absolute genius. It simultaneously gives the reader permission to read into every single detail in this series and gives the reader a pass for not being able to unpack it all. Hell, there may not even be meaning behind some of the details, but the fact that you can searching for meaning in them is valuable.

Drew: Oh, Patrick, I can understand the fear of missing some references, but this is Grant Morrison we’re talking about here: you’ve got to accept that the majority of this stuff is going to go over everybody’s head. Hell, I’ve read (and reread) the entirety of his run, and my lofty goal amounts to little more than clinging on for dear life — if I have any idea what the fuck just happened, I consider that a win. Is that maybe lowering my standards too much? Possibly, but between extensive annotation sites and Morrison’s own notes that are invariably released in the trades, I’ve resigned myself to the notion that catching everything is simply too tall an order.

That said, Patrick, you’ve come up with a very compelling reading of the Ten Ox Herding Pictures. I think Morrison does mean the pictures, as a work of sequential art designed to have much more meaning, to represent his own work on Batman. I don’t often expect this kind of meta-commentary from Morrison, but I can’t help but feel the Oroboro — the image of a snake eating its own tail that has been ever present in this series — is also a reference to his own work. Between the countless references to Silver Age Batman stories and dense self-reference, this Morrison’s run has been eating its own tail for a very long time.

But of course, things aren’t so simple. Indeed, the Ox Herding Pictures aren’t just Morrison’s comment on what’s going on here — Talia is choosing to show them to Bruce. Again, I think there’s room for a meta-commentary reading of this. Like Batman, Morrison’s detractors just want to get to the fucking point already, but Talia and Morrison want to present us some heady symbolism first. But again, that’s not all that’s going on here. Patrick is right to suggest that there’s no explicit parallel to the Ox Herding Pictures in this issue, but I think the parallel might be much, much bigger than that.

The parable begins with an innocent child just waking to the problems of the world — sound familiar? Through a mix of detective skills and physical prowess, the boy is able to tame the ox — though as Patrick pointed out, it’s been changed here to a goat as an obvious allusion to Gotham. Having accomplished his goal, the boy is idle until we get to that blank picture Patrick mentioned, a picture that exists out of space and — if I may be so bold — time. When the boy returns to the world, he has a new perspective, and begins a tour of sharing his enlightenment with those around him. I’m pretty certain this parable is meant to symbolize Bruce’s entire journey in Morrison’s epic (and actually, from his origin through Batman Incorporated), but it also works on a microcosmic level for solving individual crimes, suggesting a cyclical nature that explains Bruce’s ability to have similar adventures over and over again. Curiously, either interpretation leaves what happens next up in the air. On the macro scale, the genesis of Batman Incorporated is represented in the last panel — we don’t know what happens next — while on the micro scale, we’re still somewhere in the midst of catching the ox — no clues yet as to what his enlightenment might be.

That’s the kind of symbolism that makes Morrison so thrilling to read, but the thing that I love most about this issue is Morrison’s commitment to referencing the Bat mythos. There’s something incredibly satisfying to seeing Batman show up in the Batmobile and have Gordon tersely inform him that “They have hostages. They only want to talk to you.” That kind of distillation of a classic scene is fun, but it’s the way Morrison treats the elements of Bruce’s origin as weighty, symbolic totems that make his run such a love letter to Batman. 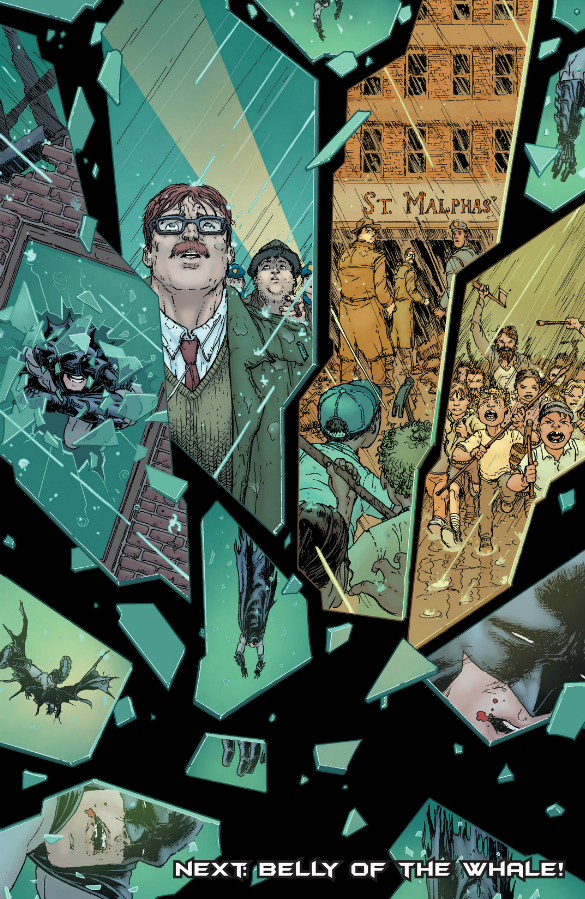 We see Batman thrown through about a bazillion windows in this issue, but this image makes the connection to that fateful night in his father’s library explicit. On the far left, we have Batman breaking through the window, the same way the bat did all those years ago, only this image is far from inspiring. Indeed, Gordon is downright worried at the sight of his friend — usually the competent crime-stopper — thrown out of a window. To add insult to injury, it looks like a group of marauding kids is about to kill everything in sight. Yikes!

In elevating the images of Batman’s origins to the same level as the Ten Ox Herding Pictures, Morrison is suggesting an almost religious significance to the Batman myth. Moreover, he’s suggesting that a true understanding of Batman may actually be a path towards some kind of greater knowledge. That sounds highfalutin, but it’s essentially the goal of all artists — that their art is a means to understanding some deeper truth. What’s unique about what Morrison is suggesting here is that the truth doesn’t lie in his interpretation, but in understanding the basic elements of the medium itself (that is, Batman stories). It’s empowering to Batman, but it’s even more empowering to his devoted readers — the meaning is ours to find.